A New Threat for “Counter Surfers:” GI Foreign Body in a Dog

Hannah, a 10-year-old, spayed Labrador retriever mix, presented for vomiting of 5 days’ duration, accompanied by occasional bouts of diarrhea and a decreased appetite. She was otherwise reported to be healthy and current on vaccinations, and was receiving levothyroxine tablets at 0.8 mg PO q12h for hypothyroidism. Approximately 7 weeks before the onset of clinical signs, Hannah had eaten cupcakes from the kitchen counter.

On physical examination, the patient was bright, alert, and responsive, with a temperature of 102.4 and an estimated BCS of 7/9; she weighed 80 pounds. Abdominal palpation showed no tenderness or abnormal findings. She appeared 7-9% dehydrated. 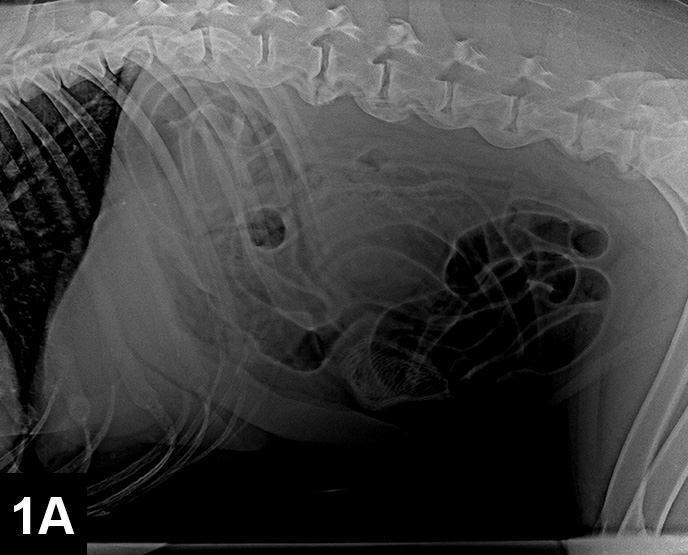 Abdominal radiographs (Figures 1A and 1B) revealed significant small intestinal dilation and a striated mass within the intestine, leading to a preliminary diagnosis of GI foreign body causing obstruction.

The ingested cupcakes were baked in silicone cups, at least one of which was consumed by the patient. Silicone baking cups have been used only recently and are advertised as more “green” and “earth-friendly” than disposable paper liners. However, they do not pass easily through a dog’s GI tract. The time between ingestion of the cupcakes and clinical signs (the time frame was again confirmed with the client) suggests that the material lingered in the stomach for weeks before passing into the small intestine and causing the obstruction.

The patient was taken to surgery for an abdominal exploratory procedure. An IV catheter was placed, and the patient was treated with crystalloid fluids (lactated ringers) to correct the dehydration.

The foreign body was located within the distal jejunum, and the intestinal wall appeared dark purple. Allis tissue forceps were placed proximal and distal to the affected tissue, and an enterotomy was performed; a silicone baking cup was removed from the lumen. The mucosal surface was a blackish-green color, and peristalsis was not observed in the affected area of intestine. Resection and anastomosis were performed; approximately 6 inches of bowel was removed.

Recovery from surgery was uneventful. The patient experienced loose stools for approximately 36 hours postoperatively, ceased vomiting, and was discharged from the hospital after 3 days with no further problems.