W. Alexander Fox-Alvarez, DVM, MS, DACVS-SA, is a small animal soft tissue surgeon at University of Florida, where he also earned his DVM and completed a surgical residency. Dr. Fox-Alvarez's interests include minimally invasive surgery, skin and reconstructive surgery, zoo and exotic animal surgery, surgical education, and use of novel technologies in surgery. His current research involves the use of near-infrared angiography for perfusion assessments in dogs.

J. Brad Case, DVM, MS, DACVS, is an associate professor and small animal surgeon at University of Florida and serves as president of the Veterinary Endoscopy Society. He earned his DVM from University of California, Davis, and his MS from Colorado State University, where he also completed a residency. Dr. Case’s primary clinical research interests are in developing minimally invasive and vascular interventional procedures.

The spleen has a diverse set of functions, including hematopoiesis, RBC filtration and storage, and immune surveillance. Despite its many functions, removal of the spleen is commonly performed in dogs and cats with rarely observed long-term adverse sequelae. Splenectomy is indicated in cases of splenic neoplasia, trauma, torsion, and infiltrative disease and, occasionally, as treatment for immune-mediated disorders. It is also commonly performed on an emergency basis for hemoabdomen of splenic origin.

Clinicians should have an understanding of the splenic and regional vascular anatomy before performing splenectomy. The spleen is located on the left side of the body. The head of the spleen is the craniodorsal-most portion and is attached to the greater curvature of the stomach via the gastrosplenic ligament, in which the short gastric arteries and veins are located. The tail of the spleen is the larger, caudal, more mobile portion that sweeps across the ventral midline, with a loose terminal attachment to the greater omentum. 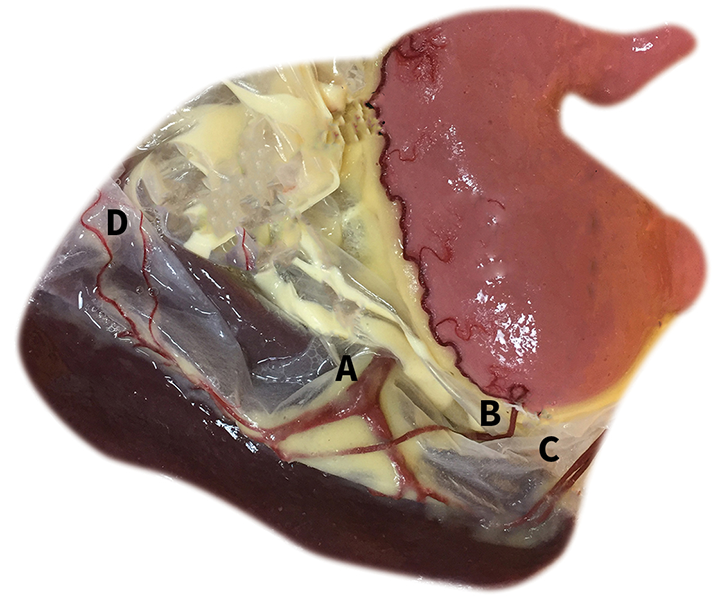 The head of the spleen is supplied by the short gastric arteries, which arise from the dorsal branch of the splenic artery and anastomose with the branches of the left gastric artery. The majority of the spleen is supplied by the ventral branch of the splenic artery and its numerous intermediate branches into the hilus. The ventral splenic artery continues as the left gastroepiploic artery supplying the greater curvature and fundic portion of the stomach. Ideally, this continuation should be preserved; however, it was shown that sacrifice of the left gastroepiploic vessel did not compromise gastric blood flow or the integrity of the gastric wall in healthy dogs.1 At the terminal portion of the tail of the spleen, the vessels continue as branches to the omentum.

The least complicated anatomic approach to splenectomy that ensures no inadvertent ligation of the pancreatic or left gastroepiploic vessels is the hilar ligation technique. With this technique, the vessels are ligated as they terminate into the spleen. The speed of this technique varies depending on the manner of ligation used, with the use of a vessel-sealing device being the fastest, followed by a staple or clip device, and lastly suture ligation. Some devices can seal vessels up to 7 mm in diameter, whereas hemostatic clips are appropriate for vessels up to 3 mm in diameter. With the appropriate size and material, hand ligation with suture can be used in any size vessel for splenectomy. The following describes the hilar approach to splenectomy.

Position the patient in dorsal recumbency (A), and prepare the abdomen with a standard aseptic technique. Drape the patient from xiphoid to pubis (B). In male dogs, maintain the penis out of the sterile field. 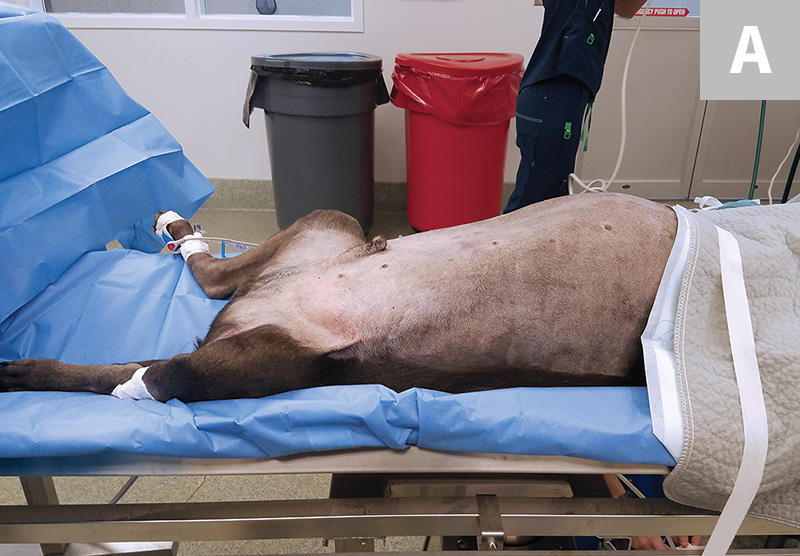 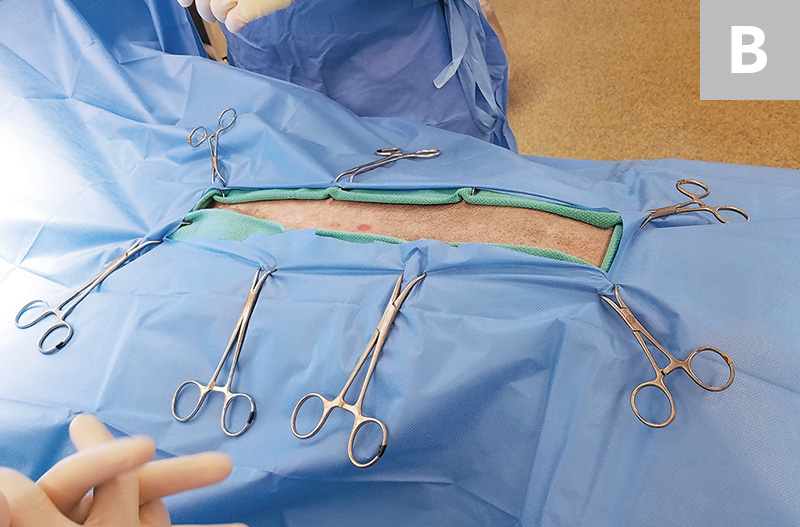 Make a ventral midline abdominal incision from the xiphoid to 2 to 3 cm caudal to the umbilicus (A). The incision can be extended caudally if the size of the mass requires. Using electrosurgical instruments or ligation, remove the falciform fat en bloc to improve exposure (B). In rare cases, extension from midline into a paracostal incision may be indicated for removal of larger splenic masses. 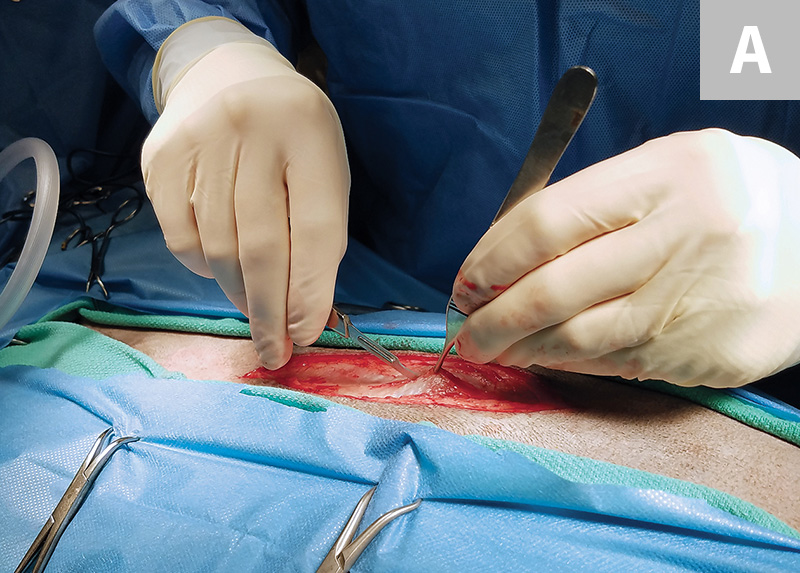 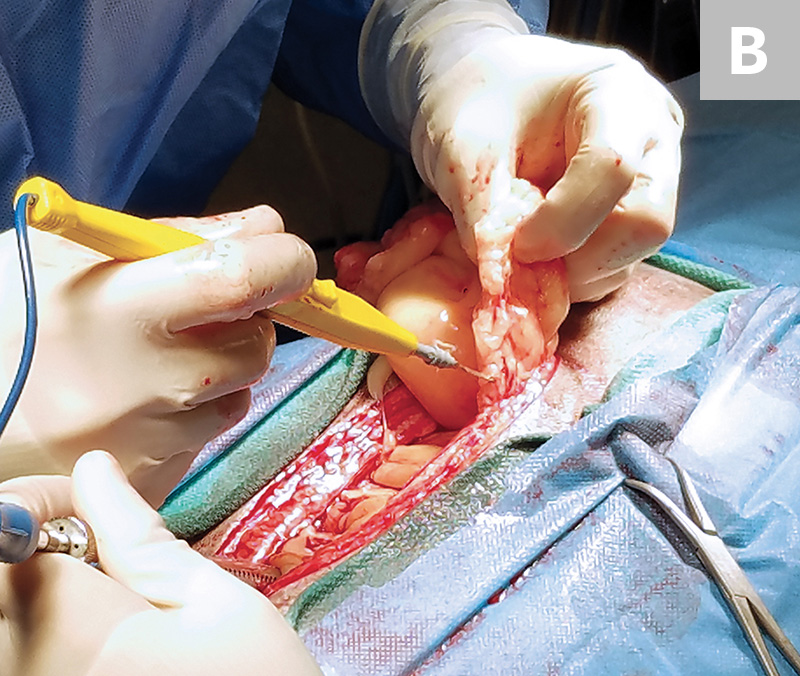 Perform a methodical exploration of the abdomen. If hemoabdomen is present, use suction to remove the hemorrhage and improve visualization. Carefully inspect the liver and the remaining abdominal viscera to monitor for presence of gross metastasis. A liver biopsy is indicated in cases of suspected malignancy regardless of gross appearance (see Liver Biopsy). Gently manipulate the spleen out of the body and onto moistened laparotomy sponges. A diseased spleen is often friable and should be carefully handled to prevent rupture. If the omentum is adhered to a splenic mass, divide the adhesions using electrosurgical devices or ligation. Digital dissection is not recommended, as rupture of the splenic mass may occur.

The hilar vessels can be visualized as they enter the splenic parenchyma (A). Using hemostatic forceps, bluntly isolate the vessels (B). Using 3-0 absorbable suture, circumferentially double ligate the hilar pedicles (C and D). Before transecting the vessel, place hemostatic forceps on the pedicle close to the spleen (E); this will help prevent splenic bleeding. Repeat this step for all vessels along the splenic hilus until the spleen is removed (F). 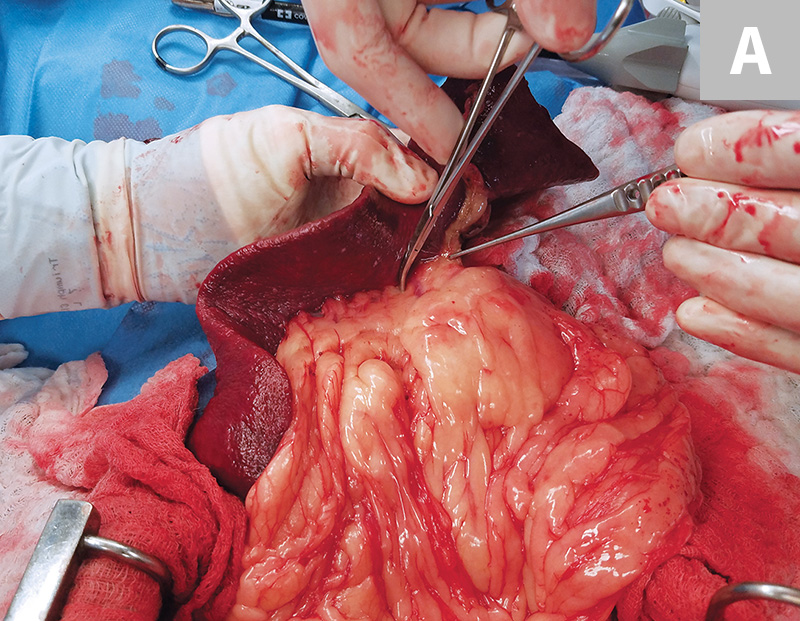 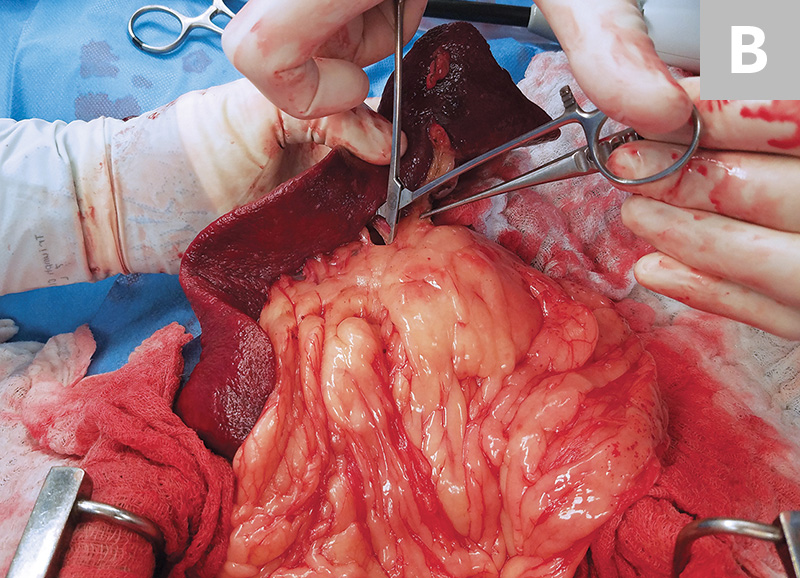 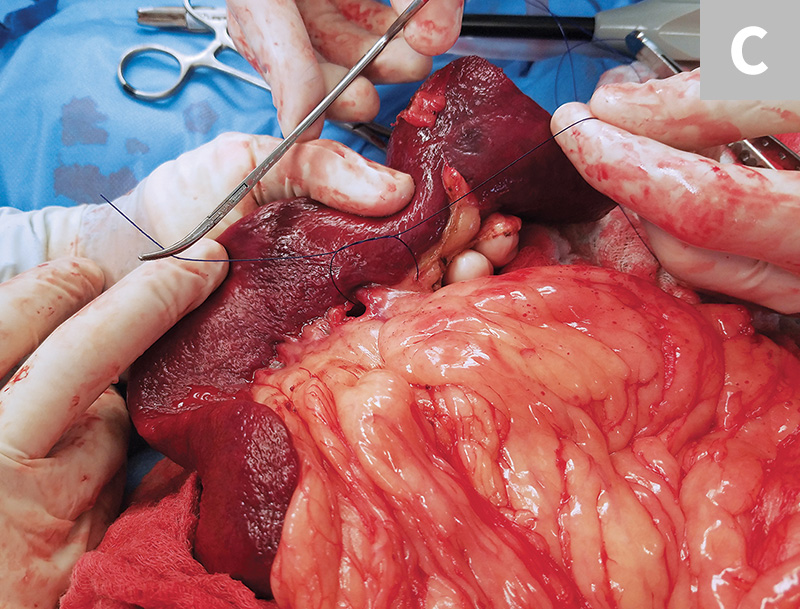 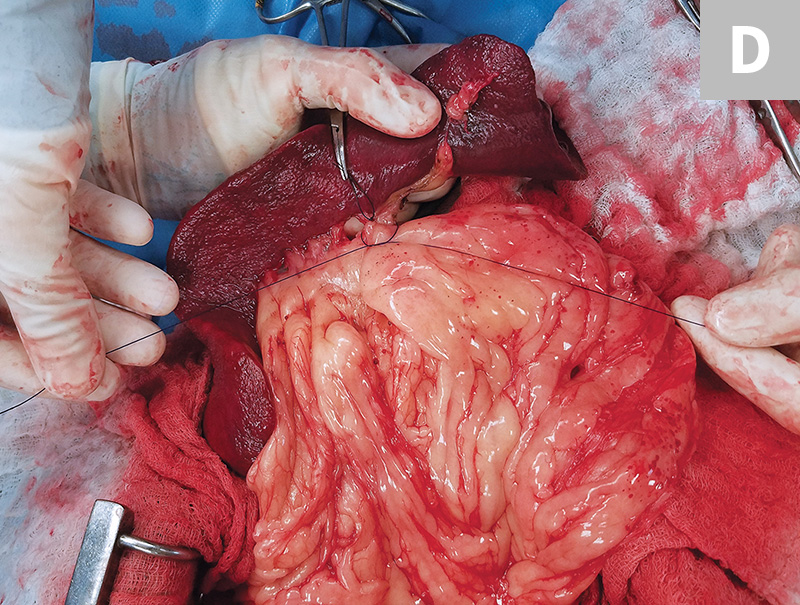 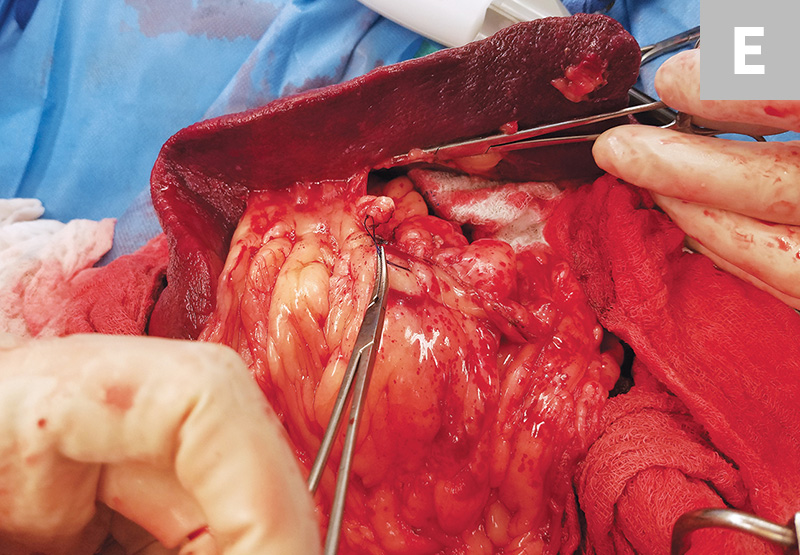 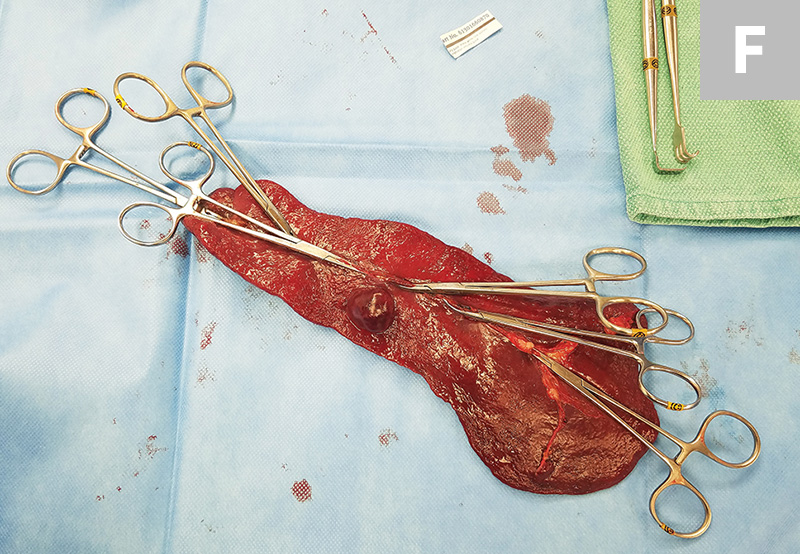 As an alternative to suture ligation, splenic hilar vessels can be ligated using a vessel-stapling apparatus or a vessel-sealing device.4

To speed up splenectomy, a surgical assistant can work on isolating the splenic hilar vessels using hemostatic forceps while the surgeon ligates and divides the isolated vessels.

One veterinary study demonstrated no difference in clinical outcome between splenectomy performed using a vessel-sealing device versus a stapler; however, the sealing device yielded significantly shorter procedure times.5 Another study found the bursting strength of the sealing device to be greater than 300 mm Hg (ie, ≈3 times systolic pressure).6

After removing the spleen, biopsy any other grossly abnormal tissue. Check the splenic pedicles and biopsy sites for appropriate hemostasis, then gently lavage with warm sterile saline and evacuate the fluid. Perform routine abdominal closure.

Submit the spleen and tissue for histopathologic evaluation.

IV fluids should be continued postoperatively and matched to meet the patient’s needs. Ongoing monitoring should include serial packed cell volume checks, continuous ECG for assessment of changes in heart rate and rhythm, twice-daily urine output assessment, body weight monitoring, and serial venous blood gas and lactate monitoring. IV opioid analgesics should be administered for at least 24 to 48 hours before weaning or switching to oral analgesic medications. Perioperative antibiotics should not be required for longer than 24 hours unless splenectomy was performed for splenic abscess, in which case antibiotics should be chosen based on results of culture and susceptibility testing and administered for 10 to 14 days.