Lore I. Haug, DVM, MS, DACVB, CABC, works in a private referral, behavior-only practice in Sugar Land, Texas, and is a past president of the American College of Veterinary Behaviorists. Dr. Haug earned her DVM from Texas A&M University and is certified through the International Association of Animal Behavior Consultants. She speaks routinely to veterinary groups and animal trainers across the country, is the author of numerous articles and book chapters, and is coauthor of Decoding Your Dog by the American College of Veterinary Behaviorists. 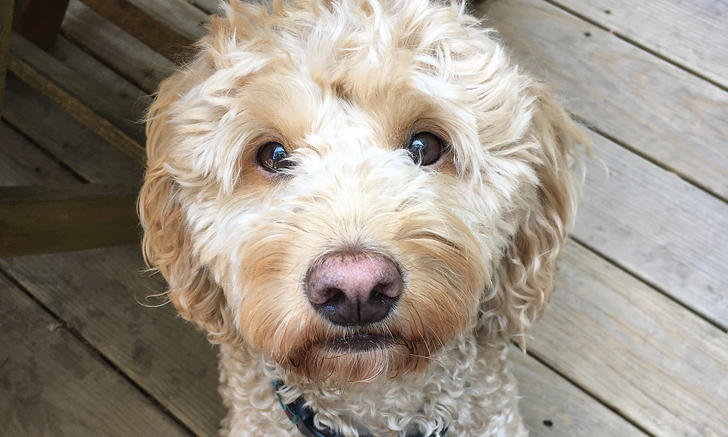 Stevie, a 1-year-old neutered male goldendoodle, was presented for a history of growling, snapping, and biting at his owners since he was a young puppy. The behavior occurred when his owners attempted to take items away from him (ie, resource guarding) and sometimes when they attempted to pet him. This behavior made routine husbandry (eg, ear cleaning, brushing, nail trims) difficult and resulted in limited veterinary examination opportunities. The owners noted that Stevie frequently whined and paced at home and persistently mounted the male owner’s leg during stressful situations.

Stevie was acquired from a local breeder and was the owners’ first dog; they had carefully researched the breed and breeder. Starting at 12 weeks of age, Stevie was continuously enrolled in obedience classes or private training sessions that used positive reinforcement by a skilled and educated trainer. Training resulted in relatively good response to basic cues (eg, sit, stay) and decreased resource guarding; however, much of Stevie’s anxiety and aggression persisted.

The owners practiced Stevie’s training daily and walked him daily for 30 minutes. He attended daycare twice weekly, where he socialized well with other dogs. He was fed a limited-ingredient diet because of food allergies that caused pruritus, poor appetite, and chronic diarrhea. Poor appetite, however, impeded use of food-based rewards for training.

At the time of presentation, Stevie continued to have chronic intermittent diarrhea. The owners reported episodes of poor appetite and social withdrawal at home followed by escalation of aggression within 24 hours.

Stevie was anxious in the examination room. He whined persistently, frequently jumped on his owners, and often hid under a chair for several minutes before coming back out and pacing and whining again. When the male owner stood up from his chair, Stevie’s whining escalated markedly, and he jumped on the owner’s leg and began pelvic thrusting. The owner had difficulty removing Stevie from his leg, and Stevie persisted in trying to mount the owner’s leg again. Stevie did not respond to obedience training cues, and his owners noted that this behavior was typical when Stevie’s distress level was high.

Stevie avoided interaction with the veterinary team even when offered treats; however, he did not show aggression as they moved around the examination room. Because of Stevie’s high stress level, a limited physical examination was performed.

Stage of development (in this case, adolescence), physiologic and medical issues, and insufficient training and exercise can contribute to behavior problems.

Adolescence can be one of the most difficult canine developmental stages for owners to endure; however, aggression is not a trait of adolescence. Stevie’s aggression manifested at an early age and persisted into adolescence. His aggression was unrelated to dominance or hierarchy issues with his owners. Although mounting is often considered a dominant behavior, it can also be a sign of sexual arousal, stress, play, or excitement.

The owners performed extensive research before choosing to adopt a goldendoodle, and they received ongoing coaching from skilled trainers. Stevie was provided adequate exercise for his age and breed and was stimulated by training daily and given the opportunity to engage with enrichment toys.

Based on Stevie’s history, physiologic and medical issues are likely the most significant contributors to his behavior. Stevie clearly showed marked global anxiety and aggression despite the input of educated owners, skilled dog trainers, and knowledgeable veterinarians. The difficulty in this case lay in Stevie’s physiology (ie, his medical issues and potential food allergy). Stevie’s natural anxiety1 was observed from a young age, was compounded by dermatologic and GI disease, and persisted across various contexts rather than being a reaction to a specific event or situation.

Adjustments to Stevie’s behavior modification program provided additional improvement; however, when his chronic GI disease flared, aggression increased and appetite decreased, which made training more difficult. Substituting petting and toys for food rewards was problematic and potentially dangerous because Stevie guarded objects and sometimes bit his owners during petting.

The first step in Stevie’s treatment was to better control his GI disease and identify appropriate medication to reduce his baseline trait anxiety. Research on the gut microbiome has shown a close link between GI health and behavior.2-4 In these cases, an appropriate GI diagnostic evaluation is required and should include a fecal examination, trypsin-like immunoreactivity, serum folate and cobalamin levels, canine Pancreatic Lipase Immunoreactivity (idexx.com), dietary trials, and, potentially, endoscopy and intestinal biopsies.

Stevie was started on a multiorganism veterinary probiotic and a selective serotonin reuptake inhibitor (ie, paroxetine 2 mg/kg q24h). After his diet was adjusted to a single protein (ie, rabbit) and the appropriate selective serotonin reuptake inhibitor dose determined, his diarrhea resolved. Stevie’s appetite improved, and he became more responsive to training. His anxiety was markedly reduced, and he showed less aggression and was more sociable with humans in general.

Patients with behavior issues should be evaluated to identify concurrent medical conditions, particularly pain and GI disease. The health of the gut microbiota plays a significant role in an animal’s behavior and overall well-being.

Recognizing the difference between state anxiety and trait anxiety can allow clinicians to better tailor behavior modification and medication interventions for patients with all types of anxiety and/or aggression.