Craig A. Clifford, DVM, MS, DACVIM (Oncology), is the director of clinical studies at Hope Veterinary Specialists in Malvern, Pennsylvania, where he also serves as a medical oncologist. Dr. Clifford earned his DVM from Mississippi State University and his MS in animal science/virology from University of Delaware, then completed an internship and a medical oncology residency at University of Pennsylvania. He has authored and coauthored more than 50 papers and book chapters. Dr. Clifford created the Veterinary Cancer Society’s resident review session and the Northeast Veterinary Cooperative Oncology Group and has served on the VCS executive board, ACVIM Examination Rating Committee, Residency Training and Credentials Committee, Oncology Pathology Working Group, Standards of Excellence in Residency Education Task Force, and Australian Scientist’s Oncology Specialty Examination. Dr. Clifford also serves on the Scientific Advisory Boards for Industry. 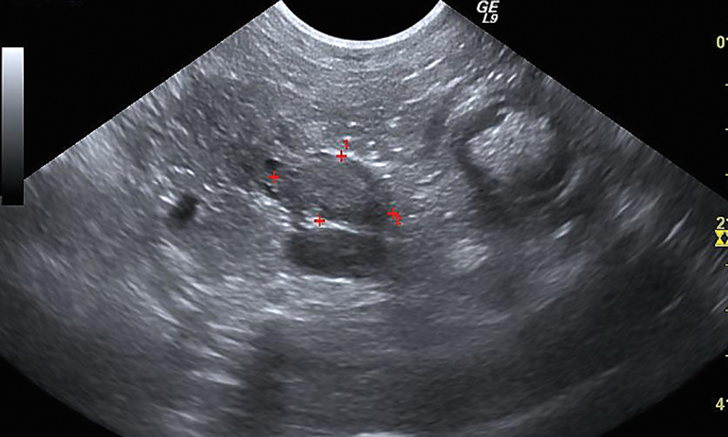 June, a 7-year-old spayed Boston terrier, was presented to an emergency service for acute onset of cluster seizures.

The morning of presentation, June had 2 generalized seizures (each lasting ≈20 seconds) 1 hour apart. She had a third seizure 2 hours after the second, shortly followed by an episode of melena, then a fourth seizure 1 hour later. At that time, she was brought to the hospital.

Before the seizures, June had been healthy. She had no changes to appetite, demeanor, or mentation, and she had no other abnormal neurologic signs. She was not on any medications, and her owner reported no evidence of toxin ingestion, trauma, or recent dietary changes. On presentation, June appeared clinically normal; she was up to date on all vaccinations and consistently received heartworm and flea/tick preventives.

Additional diagnostics were pursued. Abdominal ultrasonography demonstrated an ill-defined and mildly hyperechoic 0.75 × 1.37-cm nodule at the base of the left lobe of the pancreas (Figure 1). Small, well-defined hyperechoic nodules were also found scattered throughout all liver lobes. Three-view thoracic radiographs revealed no significant abnormalities.

A thoracoabdominal dual-phase CT scan was performed with the goals of further evaluating the pancreatic nodule, ruling out obvious metastatic disease, and planning for possible surgery. The CT scan revealed a 1.8 × 2.6-cm nodule in the body of the pancreas that demonstrated marked neovascularization in the early arterial phase and mild peripheral contrast enhancement relative to the remainder of the pancreas in the main arterial and portal phase scans (Figure 2). A strong contrast-enhancing liver nodule was noted in the arterial phase of the CT angiogram (Figure 3). Other hepatic nodules noted on ultrasound were not visualized in the arterial or mixed portal/venous angiographic phases. No evidence of nodular pulmonary metastasis was evident. 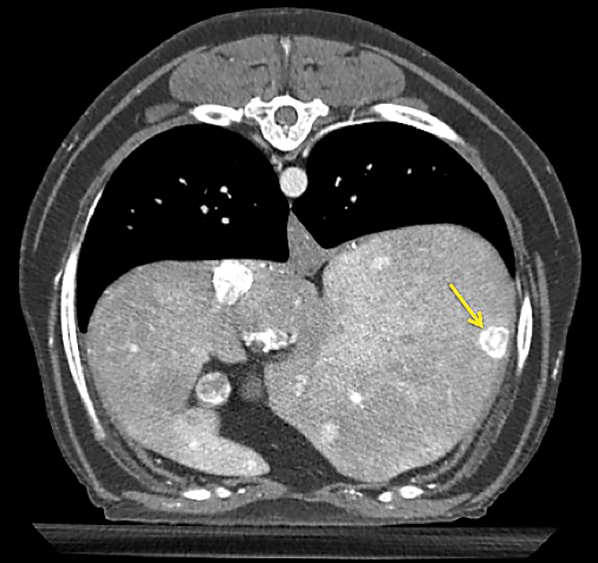 June was presumed to have an insulinoma with probable metastasis to the liver. Exploratory laparotomy for resection of the pancreatic mass and hepatic nodule(s) was discussed but was declined by the owner. Ultrasound-guided fine-needle aspiration of the pancreatic mass was performed, and cytology confirmed a neuroendocrine neoplasia consistent with an insulinoma. Specific anticancer therapies were discussed but were declined in favor of starting empiric medical management with dietary therapy (4-6 small meals per day of boiled chicken and turkey plus a prescription fiber-balanced diet) and corticosteroids (prednisone [1 mg/kg q24h]) for their gluconeogenesis effect. June’s quality of life was well managed with this regimen for approximately 6 months, at which time recurrence of hypoglycemic seizures prompted the decision for humane euthanasia.

Insulinomas are functional tumors of pancreatic β cells in the islets of Langerhans that inappropriately secrete insulin without regard for normal inhibitory signals. Most canine insulinomas are malignant and thus carry a risk for metastasis.2,3 Predisposed breeds include German shepherd dogs, boxers, golden retrievers, and Labrador retrievers.3 Clinical signs may be episodic, are typically attributable to hypoglycemia, and can include seizures, weakness, collapse, ataxia, posterior paresis, muscle fasciculations, and peripheral neuropathy.

Abdominal imaging is recommended for diagnosis and staging of metastatic disease. Although ultrasonography is a commonly available diagnostic tool, insulinomas are often small and difficult to identify on ultrasound. Advanced imaging, particularly dual-phase CT angiography, has been described for detecting canine insulinomas and appears more sensitive than ultrasonography.4,5 Three-view thoracic radiography or thoracic CT is recommended to screen for pulmonary metastasis.

Surgical resection is often the treatment of choice to reduce the burden of disease. Most insulinomas are small and solitary; however, if multiple and diffuse insulinomas have been reported, the entire pancreas should be palpated. Postoperative complications are relatively common and can include pancreatitis, persistent hypoglycemia, transient hyperglycemia, and diabetes mellitus.

Surgical tumor excision is associated with superior survival times as compared with medical therapy alone.3,6,7 Older studies suggest median survival times of 12 to 14 months for dogs treated with partial pancreatectomy.2,3,6 In one study, dogs undergoing surgery survived longer (median, 381 days) than did dogs undergoing medical therapy only (median, 74 days).6 Another study of 28 dogs found that dogs undergoing partial pancreatectomy (n = 19) survived a median of 785 days, whereas those receiving medical therapy only lived a median of 196 days.7 Of note, a subset of dogs in this study received corticosteroids following relapse and had surprisingly long survival times (1316 days); this has not, however, been the experience of the article authors.7

Postoperative prognosis depends on stage of disease; one study found that the median disease-free interval (ie, duration of normoglycemia) for dogs with stage I disease was 14 months, whereas less than 20% of dogs with stage II and stage III disease had control of hypoglycemia for that length of time, and less than 50% of dogs with stage III disease lived longer than 6 months.8 More recently, certain clinicopathologic features and markers of proliferation were found to be prognostic in a study of 16 dogs in which stromal fibrosis in tumors was found to be significantly predictive for survival, whereas tumor size, the Ki67 index, and TNM (tumor, node, metastasis) were significant for both disease-free interval and survival time.9