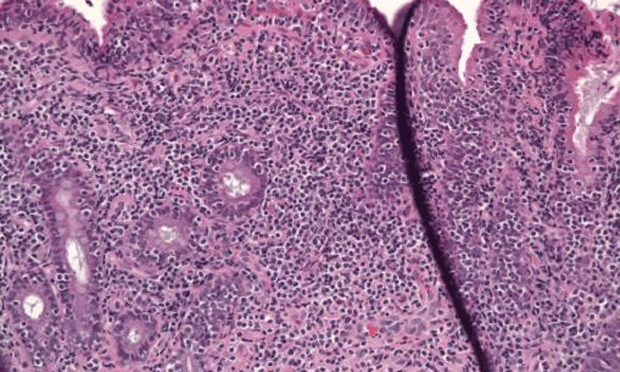 Feline triaditis is the concurrent presence of inflammatory disease of the liver, the pancreas, and the intestines in a cat. The term is somewhat of a misnomer and stands in contrast to the use of the term in human medicine, where it denotes an inflammatory condition involving hepatic triads and adjacent connective tissue.

Concurrent inflammatory disease of the liver, the pancreas, and the intestines have been described in several case reports.1-4 In a landmark paper, Weiss and colleagues5 described the correlation of inflammatory disease of these 3 organs in a large group of cats. In this study, 83% of cats with cholangiohepatitis also had IBD, 50% had concurrent pancreatitis, and 39% had both concurrent IBD and pancreatitis. Interestingly, the rate of concurrent nephritis was similar in cats with cholangiohepatitis and those without inflammatory conditions of the liver.

While the rates of IBD and pancreatitis are higher in cats with cholangiohepatitis than in cats without cholangiohepatitis, a cause-and-effect relationship among these 3 inflammatory conditions has not been described. Several hypotheses have been advanced as to how these conditions could be related, but none has been experimentally explored. Thus, this relationship remains merely speculative.

Hepatobiliary, exocrine pancreas, and the small intestines are affected.

Cholangiohepatitis, pancreatitis, and IBD all are very common in cats.

All 3 conditions are found worldwide.

All 3 components of triaditis are chronic diseases that can be challenging to manage.

There are a variety of nutritional considerations that do not always agree:

Immunosuppressive agents should not be used until the bacterial component of cholangiohepatitis or cholangitis has been ruled out, deemed to be highly unlikely, or has been successfully addressed.

Triaditis can be associated with such complications as hepatic lipidosis, hepatic failure, or fulminant exacerbation of pancreatitis.

Unless triaditis is associated with complications, patients can mostly be treated at home.

Much remains to be studied concerning feline triaditis or the 3 conditions that are part of this disease complex.

TX at a glance