Vomiting & Diarrhea in a Lethargic Dog 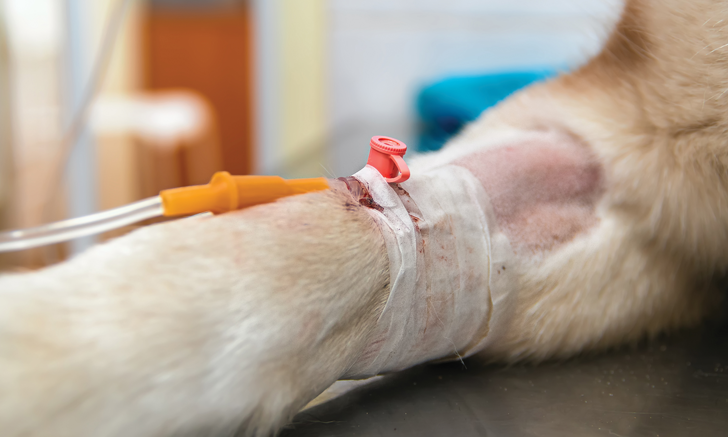 Max, an 8-year-old, 32-lb (14.5-kg), neutered male border collie, was emergently presented for vomiting, diarrhea, and lethargy of 3 days’ duration. He was fed a veterinary commercial diet but, when he began vomiting, was transitioned to a bland diet of boneless, skinless boiled chicken and white rice; however, he continued to vomit while on the bland diet.

Max had a previous history of 2 exploratory laparotomies for foreign bodies but had no other major medical history. He was the only dog in the household, had access to a fenced backyard, and had no significant travel history. He was up to date on vaccines and flea, tick, and heartworm prevention.

On presentation, Max was laterally recumbent, obtunded, and ≈7% dehydrated. He was pyrexic (temperature, 104.5°F [40.3°C]) and tachycardic (150 bpm) with a normal respiratory rate (28 breaths per minute). Mucous membranes were pale, and capillary refill time was prolonged (ie, 3 seconds). He had weak peripheral pulses, and his distal limbs and paw pads were cool to the touch. Harsh lung sounds were auscultated bilaterally throughout all lung fields. He was painful on abdominal palpation, particularly in the cranial abdomen, and had profuse hemorrhagic diarrhea; he also passed pieces of 2 rubber ball toys from his rectum. His owners did not report any foreign material having been passed at home. The remainder of the physical examination was unremarkable.

Images obtained using abdominal-focused assessment with sonography for trauma revealed no evidence of free fluid. Images obtained using thoracic-focused assessment with sonography for trauma revealed 4 to 5 B lines in the region of the right middle lung lobe; B lines are reverberation artifacts and can be present with interstitial edema as air content decreases. Abdominal radiographs revealed fluid-filled loops of intestine consistent with diffuse ileus; however, there was no evidence of GI obstruction. Abdominal sonograms were suggestive of pancreatitis with focal peritonitis but were otherwise unremarkable. Thoracic radiographs revealed an alveolar pattern in the right middle lung lobe that was suggestive of aspiration pneumonia.

Max was stabilized with crystalloid fluid boluses (lactated Ringer’s solution [total, 40 mL/kg IV]), followed by a colloid bolus (6% hydroxyethyl starch in sodium chloride [5 mL/kg IV]) administered over 20 minutes. Of note, the use of synthetic colloids is controversial in humans with sepsis due to increased risk for acute kidney injury. Two 25% dextrose boluses (1 mL/kg IV) were also administered to help treat hypoglycemia. Broad-spectrum antibiotic therapy (ie, ampicillin/sulbactam [30 mg/kg IV], enrofloxacin [10 mg/kg IV]) was initiated within an hour of admission, and oxygen supplementation (100 mL/kg/min increased to a maximum of 4-5 L/min) was provided via nasal cannula.

Because Max’s blood pressure did not respond adequately to fluid therapy and had an oscillometric mean of 50 mm Hg, septic shock was diagnosed. Norepinephrine at 0.2 μg/kg/min CRI was initiated and increased incrementally by 0.1 μg/kg/min to 0.8 μg/kg/min within 45 minutes, at which point vasopressin (0.5 milliUnits/kg/min CRI IV) was initiated.

Due to the lack of improvement in blood pressure with increasing doses of vasopressors, CIRCI was strongly suspected. Resting cortisol was 6.96 μg/dL (reference range, 1.8-9 μg/dL), and hydrocortisone sodium succinate (1 mg/kg IV bolus followed by CRI at 0.08 mg/kg/hr) was subsequently initiated to treat possible comorbid CIRCI (see Treatment at a Glance).

Septic shock is uncommonly reported in veterinary medicine, and prognosis is poor even with treatment. Reported survival rate in dogs with hypotension severe enough to require vasopressor therapy has been reported to be ≈10% to 20% as compared with a 40% survival rate in humans.1-3 The prognosis for septic shock for humans and dogs with CIRCI is unknown.

CIRCI is defined as inadequate corticosteroid activity in relation to the severity of a patient’s illness (see Take-Home Messages).4 CIRCI has been reported to occur in ≈60% of humans with severe sepsis and septic shock.5 The cause of hypothalamic–pituitary–adrenal axis dysfunction is poorly understood. Potential factors of this dysfunction include decreased production of adrenocorticotropic hormone (ACTH), corticotropin-releasing hormone, and cortisol; dysfunction of their associated receptors; adrenal damage from infarction or hemorrhage; adrenal suppression from chronic exogenous glucocorticoid administration; and inflammatory cytokines causing systemic inflammation-associated glucocorticoid resistance. No specific guidelines exist in veterinary medicine for diagnosing or treating CIRCI, and only rare case reports exist. The recommendation for treatment of CIRCI in humans is administration of injectable hydrocortisone, preferably as a constant rate infusion.6