Unusual Fecal Parasite in a Dog 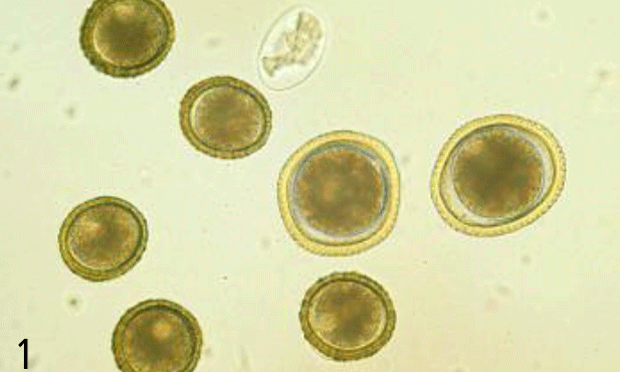 Buster, a 2-year-old, intact, male mixed-breed dog was adopted from a local shelter and presented to the veterinary clinic for health evaluation and neuter operation.

History. Buster has no obvious medical problems. Before he was placed at the shelter, he lived on a farm in the Midwest and was primarily an outdoor dog. According to the owners, he runs in the local woods and is known to scavenge dead animals and eat other things he may find. His vaccinations are current, but he has not been on a heartworm preventative.

Physical Examination. Buster appears to be in overall good health. Centrifugal flotation is used to examine a fecal sample for parasites, and a heartworm antigen test is performed. The technician notes two types of eggs, Toxocara canis and smaller, unfamiliar ones. Figure 1 shows what she saw with her microscope. The veterinarian also looks at the slide and confirms the presence of the unusual parasite eggs. Buster is to be treated 3 times with a broad-spectrum anthelmintic on a 2-week schedule, and a follow-up fecal examination is scheduled for the next visit in 2 weeks. On that fecal examination, no parasite eggs are seen. The heartworm test is negative, and Buster is started on a monthly heartworm preventative that also removes intestinal nematodes. The neuter operation is uneventful. Two days after the first deworming, Buster sheds numerous roundworms in his feces, which the owner picks up and disposes of in the trash as directed by the veterinarian.

Eggs of B. procyonis (smaller, darker) and T. canis from the feces of a dog (407x original magnification) 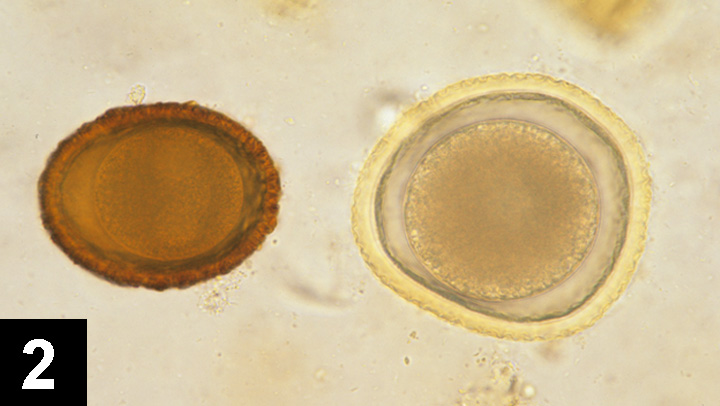 Same eggs as in Figure 2, focusing on the surface of the eggs. Note the finely granular surface of B. procyonis and the coarsely pitted surface of T. canis (407x original magnification). 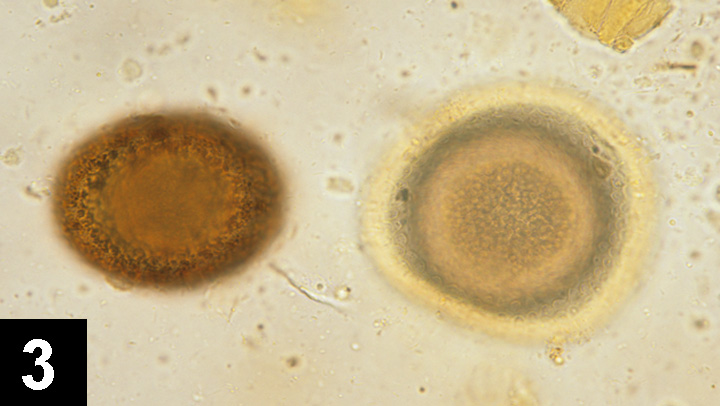 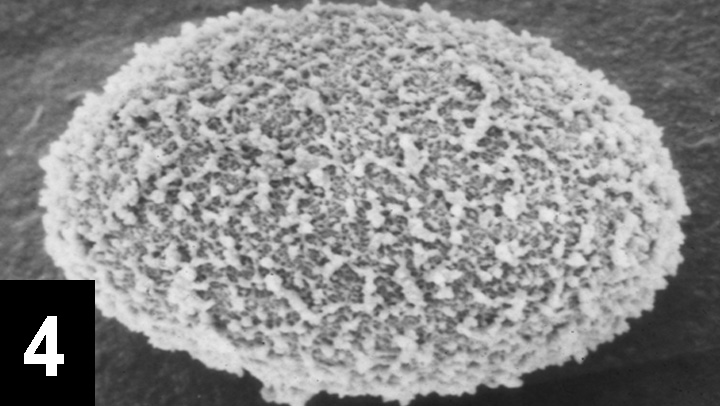 The Eggs. Baylisascaris procyonis eggs are distinct from other ascarids found in dogs. They are ellipsoidal and brown and range in size from 63 to 88 × 50 to 70 µm-most average 68 to 76 × 55 to 61 µm. They have a finely granular surface (protein coat), and the single-celled embryo usually fills the egg only partially. In comparison, T. canis eggs are larger (85 to 90 × 75 to 80 µm), subspherical, and lighter in color. They have a coarsely pitted surface, and the embryo usually nearly fills the egg. Figures 1 to 3 show the eggs of both species; Figure 3 focuses on the surface of the eggs. 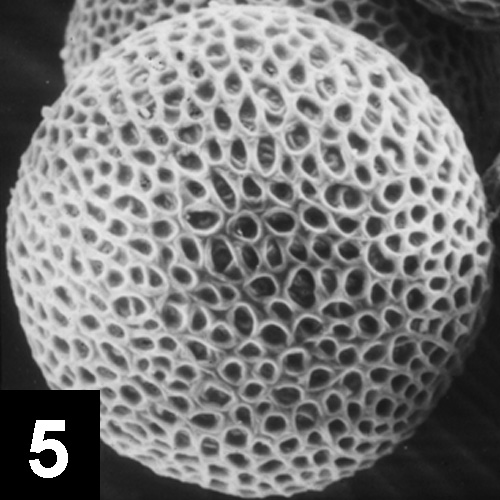 Figures 4 and 5 show the surface features of B. procyonis and T. canis, respectively, as they would appear with a scanning electron microscope. Another ascarid occasionally seen in dogs, Toxascaris leonina, produces ellipsoidal eggs that are 75 to 85 × 60 to 75 µm and colorless (appear gray, like hookworm eggs), with a smooth surface; they have an embryo that partially fills the egg, and a prominent lipid layer visible inside the shell (Figure 6). An ocular micrometer is essential for accurate measurment.

The Organism. Baylisascaris procyonis is a common intestinal parasite of the raccoon. It is most common in the midwestern and northeastern United States and on the West Coast, where its prevalence in raccoons varies from about 70% to nearly 100%. The adult roundworms are larger than those of Toxocara-females reach 20 to 22 cm and males 9 to 11 cm in length. Baylisascaris and Toxocara adults passed in feces may be difficult to distinguish morphologically-Baylisascaris lack salient cervical alae as seen on Toxocara and male Baylisascaris have prominent pericloacal roughened areas. Female worms may be dissected and eggs from the uterus examined (as above) for identification.

Animal & Human Disease. B. procyonis is best known as a cause of clinical larva migrans in animals and humans, in which it typically produces acute or chronic, progressive neurologic disease (neural larva migrans). In North America, in addition to humans, over 100 species, including over a dozen species of primates, have been killed or seriously affected by this parasite. B. procyonis is also a well-known cause of ocular and visceral larva migrans in humans. Infection occurs through ingestion of infective eggs from areas or articles (eg, bark, leaves, hands, clothing) contaminated with raccoon feces.

Baylisascaris in Dogs. In some canine cases, B. procyonis causes fatal or severe neural larva migrans. Several cases have been reported in the literature, we are aware of other cases, and the disease has been produced experimentally in dogs fed infective eggs. Typically, dogs develop progressive neurologic disease with head tilt, circling, and ataxia, progressing to lateral recumbency with paddling of limbs and/or extensor rigidity and opisthotonos. In other cases, the parasite reaches adulthood in the small intestine, and these dogs become patent, shedding eggs in their feces. So far, both types of infection have not been documented in the same dog. Patent infections have been produced experimentally following oral infection with either infective eggs or larvae from intermediate hosts, the latter being more successful. Clinical disease has not been described in dogs with such infection, although intestinal upset and related gastrointestinal signs would be expected in heavily infected puppies.

Patent intestinal infection may be more common in dogs than is generally known. More than two dozen cases have been identified in the midwestern United States and another two dozen are suspected in Canada. Similar to the situation with Toxocara, there is circumstantial evidence of transplacental transmission of Baylisascaris larvae to puppies, and mixed infections are certainly possible (as in this case). Because of the marked zoonotic potential of this parasite, veterinarians and their staff should properly diagnose patent infections in dogs and make sure that these dogs receive appropriate anthelmintics.

Baylisascaris eggs in the feces of a dog may also be related to coprophagy (raccoon feces), and the eggs are simply passing through. In this case, egg shedding should cease within a day or two. A dog that continues to shed has a patent infection and should be treated. When in doubt, or if continued egg shedding will not be determined, it is best to treat. Anthelmintics known to be effective against adult Baylisascaris include pyrantel pamoate, fenbendazole, flubendazole, albendazole, piperazine, milbemycin oxime, high-dose ivermectin or moxidectin, and pyrantel-febantel-praziquantel combination. Dogs should be confined, and feces/worms collected and disposed of. Dog feces in the yard should also be thoroughly picked up and discarded.

Since reinfection with B. procyonis is a possibility, it would be useful for clients to try to determine where exposure took place. For example, raccoons repeatedly defecate in the same area and dogs may have contact with these latrine sites on or near their property. If the client can identify such a location, they can perhaps modify the environment to remove or destroy infective eggs and reduce its use by raccoons. Because of the zoonotic risk of B. procyonis, this would also be important to prevent infection of human family members, especially young children in the household. Finally, preventing dogs from eating wild rodents and other animals will also decrease the likelihood of their developing patent infections with B. procyonis.