Thoracic Limb Lameness in a Dog 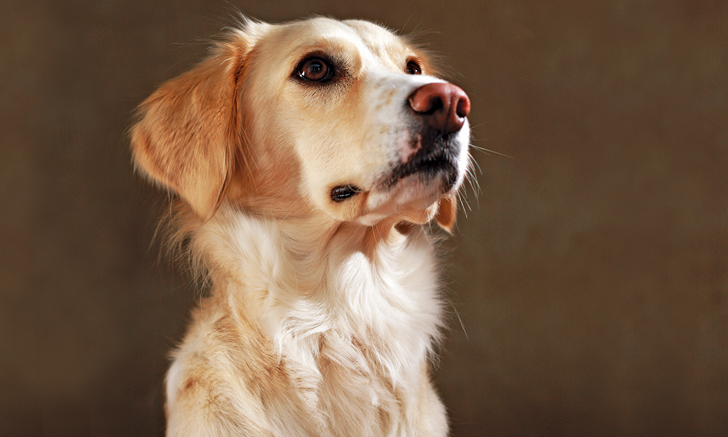 Maggie, a 5-year-old, 79.4-lb (36-kg), spayed golden retriever crossbreed, was presented to a specialty practice with chronic right-sided thoracic limb lameness of one month’s duration that began acutely soon after a rigorous hike in the mountains. She had no prior medical history and had not limped on the limb previously. She was active and athletic and exercised with her owner on a regular basis. The limping was initially subtle and intermittent but progressed to an obvious and persistent lameness that worsened with activity.

Maggie was initially examined by her primary veterinarian, who localized discomfort to her elbow, recommended 4 weeks of exercise restriction, and initiated subcutaneous polysulfated glycosaminoglycan injections and carprofen for pain. Despite these efforts, the limping continued for 3 weeks and worsened. Maggie was then referred to the specialty practice for further evaluation and a diagnostic investigation.

On presentation, Maggie was bright and alert. Subjective gait evaluation revealed moderate right-sided thoracic limb lameness. Objective gait analysis was not performed due to the obvious lameness observed on initial presentation. Maggie was observed circumducting her right thoracic limb and abducting her elbow during the swing phase of her stride. Orthopedic examination revealed palpable elbow effusion, pain on direct palpation of the medial compartment of the right elbow, and significant discomfort when this elbow was hyperflexed, extended, and supinated. There was no evidence of chronic thickening or reduced range of motion affecting either elbow joint. Goniometry of both elbows revealed flexion and extension angles of 37° and 167°, respectively. Although differences in range-of-motion values likely exist between breeds, Maggie’s range of motion was consistent with that found in a study of healthy Labrador retrievers.1 The remainder of the orthopedic examination, including that of the left thoracic limb, was unremarkable.

Following examination, Maggie was sedated with dexmedetomidine (3 μg/kg IM) and butorphanol (0.1 mg/kg IM), and orthogonal radiographs of both elbows were obtained. The left elbow appeared radiographically normal on the lateral view, whereas the right elbow had mild subtrochlear sclerosis subjacent to the trochlear notch and apparent loss of detail of the coronoid process (Figure 1). No abnormalities were detected on the craniocaudal view (Figure 2). 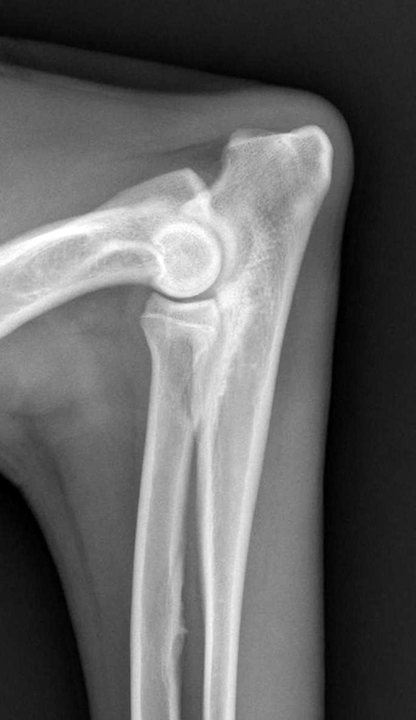 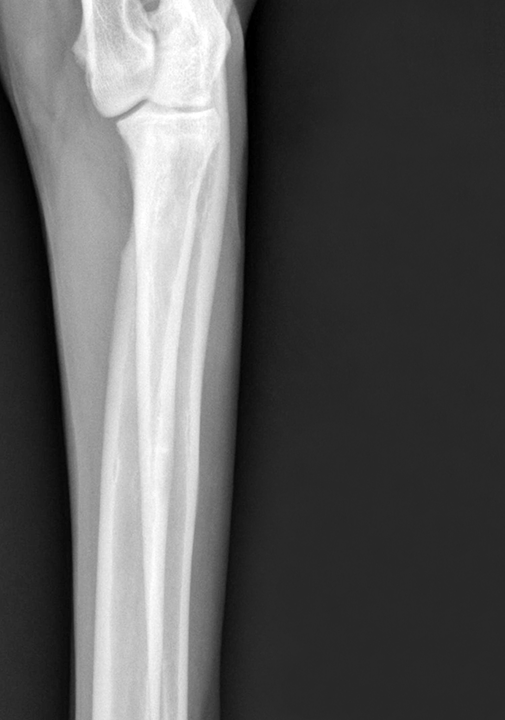 Figure 1 Lateral radiograph of the right elbow. Subtrochlear sclerosis and an ill-defined margin or loss of detail of the medial coronoid process can be observed.

Figure 2 Craniocaudal radiograph of the right elbow. No radiographic abnormalities were identified.

Figure 1 Lateral radiograph of the right elbow. Subtrochlear sclerosis and an ill-defined margin or loss of detail of the medial coronoid process can be observed.

Figure 2 Craniocaudal radiograph of the right elbow. No radiographic abnormalities were identified.

Because Maggie’s injury was acute and she had no historic, radiographic, or physical signs of chronicity, a traumatic fragmented medial coronoid process (TFMCP) was suspected as the cause of elbow effusion and pain. Because CT imaging provides excellent visualization of medial coronoid pathology and correlates well with arthroscopic findings,2 a CT scan of both elbows was offered before surgery for further diagnostic evaluation but was declined by the owner due to financial constraints. Thus, arthroscopy was elected as a single diagnostic and potentially therapeutic approach to reduce the overall cost of the treatment plan.

TFMCP, also referred to as jump down syndrome, is a condition in the elbow joint of dogs that has only recently been described, with limited literature available on the topic.3-7 Whereas the classic condition of fragmented medial coronoid process (FMCP) is thought to be a component of developmental elbow dysplasia, TFMCP appears to be potentially traumatic in nature and is not thought to be caused by developmental or genetic abnormalities.3-7 The true etiology of TFMCP is unknown, and it is unclear if it is related to elbow dysplasia or a separate entity.

Although unproven, it has been suggested that medial coronoid disease or fragmentation, whether traumatic in nature or not, may occur as the result of repetitive or acute loading of the joint during activity, causing microfractures or microcracks in the subchondral bone that result in eventual fatigue fracture and fragmentation.8 TFMCP is different from FMCP due to elbow dysplasia in that TFMCP is thought to occur in dogs with previously normal elbows; however, it has been proposed that dogs with elbow dysplasia may also be prone to TFMCP due to elbow incongruity.7

Treatment at A Glance

Both elbows were prepared for surgery. Maggie was premedicated with hydromorphone (0.1 mg/kg IM) and dexmedetomidine (3 μg/kg IM), and anesthesia was induced with propofol (4 mg/kg IV) and ketamine (1 mg/kg IV). A traditional brachial plexus block was performed on both thoracic limbs using a nerve locator and 0.5% bupivacaine (2 mg/kg). Bilateral elbow arthroscopy was performed to remove the suspected TFMCP in the right elbow and examine the left elbow for subclinical disease. The right elbow was found to have minimal signs of osteoarthritis. Fibrillation, which is characterized by splitting of the superficial layers of cartilage (modified Outerbridge system, grade 2), was the only observed cartilage abnormality and was localized to the region of the medial coronoid process. A large osteochondral fragment arising from the medial coronoid process was identified in the right elbow and removed (Figure 3), and an abrasion arthroplasty of underlying subchondral bone was performed using a mechanical shaver. Elbow incongruity was not appreciated on full arthroscopic examination. The left elbow appeared arthroscopically normal, with no cartilage abnormalities or signs of osteoarthritis. No additional abnormalities were observed. 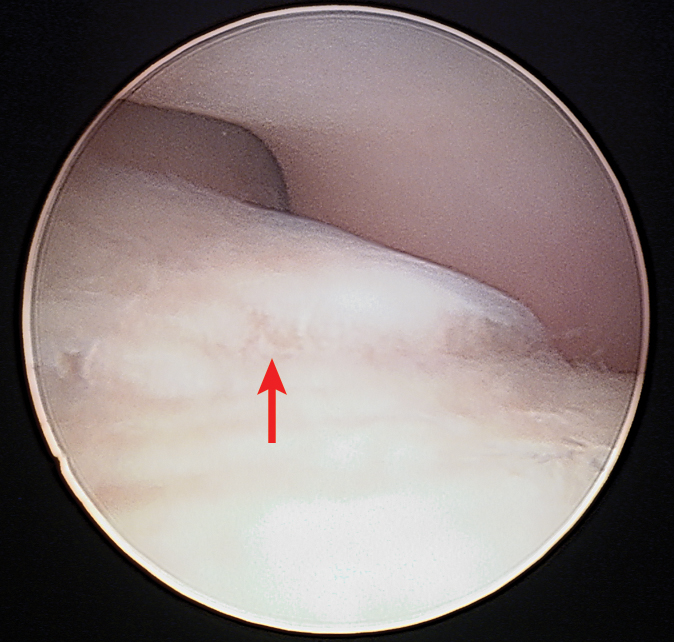 Figure 3 Arthroscopic image of the right elbow. A large osteochondral fragment is arising from the medial coronoid process (arrow), and cartilage fibrillation is present.

Figure 3 Arthroscopic image of the right elbow. A large osteochondral fragment is arising from the medial coronoid process (arrow), and cartilage fibrillation is present.

Maggie was evaluated at the end of the 8-week rehabilitation period. Lameness had completely resolved. No effusion was appreciated, and she did not appear painful. The owner was instructed to slowly return her to normal activity over an additional 6 weeks and reported that Maggie was able to return back to athletic activities after 4 months. She did not require any long-term treatment.