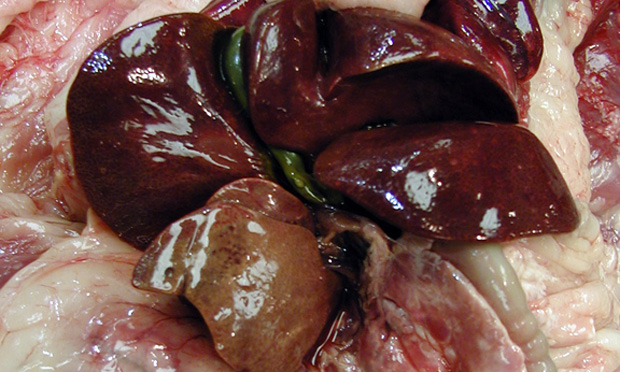 A 12-year-old male castrated Blue Russian cat was presented with a 5-day history of anorexia, lethargy, and vomiting.

Case Description. The owners noted that 9 months ago the cat had become a "picky" eater. Previous blood analysis had revealed elevated liver enzymes. This finding had prompted the referring veterinarian to occasionally give the cat "a shot of something," after which the cat seemed to feel better for a while. One month ago the referring veterinarian had prescribed a "small white pill" as an appetite stimulant, which seemed to be successful. At the current presentation, however, the signs were different (vomiting) and more severe (anorexia).

Examination. The cat was dehydrated and icteric and seemed to be in pain upon abdominal palpation. It was moderately tachycardic and tachypneic and had a rectal temperature of 99°F (37°C). Initial laboratory abnormalities included neutrophilia with a left shift, nonregenerative anemia, elevated liver enzymes and total bilirubin, and a urine specific gravity of 1.009 with 3+ bilirubinuria.

Management. The cat was stabilized with IV fluids and a heat lamp before abdominal ultrasonography was performed; this test revealed increased echogenicity in the peripancreatic fat. Laparoscopy (Figure 1) and histopathology revealed chronic cholangiohepatitis (Figure 2; from necropsy), severe lymphocytic-plasmacytic pancreatitis with lobular atrophy, and moderate lymphocytic-plasmacytic inflammatory bowel disease. This combination of abnormalities is called triaditis. 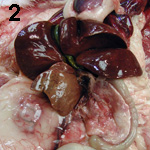 Figure 2. Gross inflammation and discoloration of the liver, pancreas, and surrounding fat

What do you think "the shot" was, and why did it seem to work?
A. Analgesic
B. Corticosteroid
C. Antibiotic
D. Vitamin
E. Any of the above

Correct Answer: E
Any of the options

Any of the preceding options would be, in theory, a reasonable choice, although most would require a consistent dosing schedule to be effective and none would constitute a single agent for triaditis.

Triaditis is a constellation of three different diseases that may or may not share a common etiology-bacterial, immune-mediated, or both. Each can be difficult to definitively diagnose alone, much less together.1 Our current therapeutic options are often nonspecific (eg, diet, antiinflammatory medication, immunosuppressives) or are based on a "best guess" (eg, antibiotics administered without a positive culture). If unrecognized, however, any of the three conditions is likely to make response to therapy for either of the other two inadequate. This helps explain why a wide variety of "trial treatments" may be of benefit but fail to result in the ultimate goal, clinical resolution.

Analgesics. Pancreatitis is a painful condition. Buprenorphine (0.01 to 0.03 mg/kg given via an IM, IV, or sublingual route Q 6 H) is an excellent analgesic for cats.2

Corticosteroids. The administration of corticosteroids might eventually exacerbate this cat's condition if the cholangiohepatitis has an infectious etiology. In the short term, however, the use of corticosteroids may offer some degree of relief from the inflammation of the pancreatitis. In addition, corticosteroid-responsive autoimmune pancreatitis is now a recognized disease entity in humans and is at least one possible explanation for chronic pancreatitis in cats. Although our approach is still based on anecdotal reports, at Colorado State University we frequently prescribe prednisolone (5 mg/d per cat) to patients with clinical and diagnostic findings consistent with chronic pancreatitis, often to good effect.

Corticosteroids are also a mainstay in the treatment of inflammatory bowel disease and are used in cats with chronic cholangiohepatitis that does not respond to antibiotic therapy alone.3 After 2 to 4 weeks of therapy with the initial dose, and depending on the clinical and biochemical responses, the dose is slowly tapered to an alternate-day regimen (1 to 2 mg/kg Q 48 H) for long-term maintenance. Because cats appear to have fewer steroid receptors than dogs, the side effects are usually minimal.4

Antibiotics. Although pancreatitis in cats is unlikely to be due to a bacterial infection, inflammatory bowel disease may have an underlying bacterial component-either as an immune response to bacterial antigens or with small intestinal bacterial overgrowth contributing to the clinical picture. Cholangitis/cholangiohepatitis in cats frequently appears responsive to antibiotics.5 At Colorado State University we often recommend an 8-week course of amoxicillin plus clavulanate (62.5 mg orally per cat Q 12 H) and watch for a decrease in abnormally elevated liver enzyme levels if the owner has declined further, more definitive diagnostic steps. This broad-spectrum antibiotic is effective against both gram-negative and gram-positive organisms, although metronidazole may be added to the treatment regimen to more fully combat anaerobes and coliforms.

Cobalamin. Cobalamin (vitamin B12) is traditionally used as an appetite stimulant; recent studies have shown that a significant percentage of cats with chronic gastrointestinal disease have low serum levels of this substance, including animals with inflammatory bowel disease, intestinal lymphoma, cholangiohepatitis, and pancreatitis.6 Replenishing a cat's cobalamin level may not only be of direct benefit but may also help improve the effectiveness of other treatments. In some cases, cobalamin supplementation may preclude the use of immunosuppressive therapy in cats with inflammatory bowel disease alone, and it should certainly be considered as a potentially important component of therapy for cats with involvement of multiple organ systems.7 The reported regimen for cats is a 250-µg subcutaneous injection given once a week for 6 weeks, followed by 1 injection every 2 weeks for 6 weeks, then monthly (indefinitely).

A TAIL OF TRIADITIS • Craig B. Webb