J. Brad Case, DVM, MS, DACVS, is an associate professor and small animal surgeon at University of Florida and serves as president of the Veterinary Endoscopy Society. He earned his DVM from University of California, Davis, and his MS from Colorado State University, where he also completed a residency. Dr. Case’s primary clinical research interests are in developing minimally invasive and vascular interventional procedures.

W. Alexander Fox-Alvarez, DVM, MS, DACVS-SA, is a small animal soft tissue surgeon at University of Florida, where he also earned his DVM and completed a surgical residency. Dr. Fox-Alvarez's interests include minimally invasive surgery, skin and reconstructive surgery, zoo and exotic animal surgery, surgical education, and use of novel technologies in surgery. His current research involves the use of near-infrared angiography for perfusion assessments in dogs. 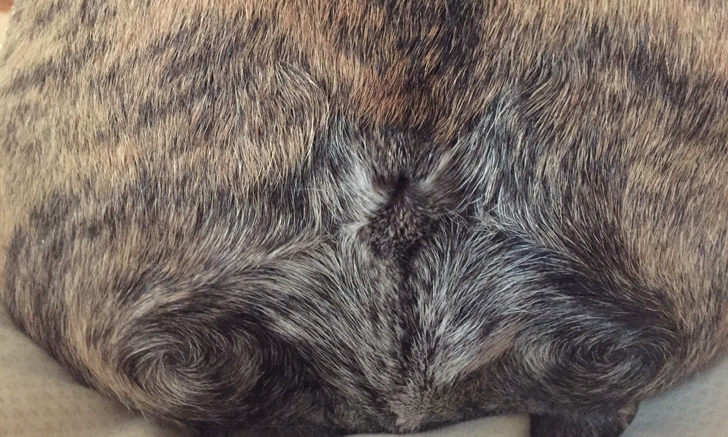 A 4-year-old castrated English bulldog was presented with a 2-year history of pain and recurrent pyoderma secondary to coccygeal vertebral malformation (corkscrew tail). The patient was reported to scoot and twirl on his hindquarters in an attempt to alleviate the discomfort. Brown, purulent discharge had been noted intermittently in the folds of the tail. Antibiotic therapy only provided temporary resolution of clinical signs.

A U-shaped skin incision is made dorsal to the tail down to the level where the tail skin begins to fold inward. This U-shaped flap will facilitate wound closure. The skin incision is continued circumferentially around the tail base. Electrosurgery or Metzenbaum scissors are used to dissect the subcutaneous (SC) tissue dorsally, down to the level of C1-C3 (ie, proposed caudectomy site, usually at or between the normal and ventrally directed coccygeal vertebrae). Once this site is identified, the remainder of SC tissue and fat is dissected circumferentially in the same plane. Palpation of the vertebrae throughout the procedure is useful to guide dissection. Extra caution is taken when dissecting ventrally, as excessive ventral dissection can lead to penetration of the rectum. The dissection plane is maintained ventrally as close to the tail as possible. Once SC tissue is dissected 360°, the area of proposed amputation can be palpated and the intervertebral space identified by manipulation of the tail. Ideally, the cut is made in the intervertebral space; however, mid-body dissection is also an appropriate option. In this case, Ruskin-Liston straight bone cutting forceps were used to perform the amputation.

Major vessels of the tail include the lateral caudal arteries and the median caudal artery, which lies ventral to the tail. In most cases, these vessels can be identified and ligated or cauterized prior to making the cut; however, because the abnormal anatomy of the corkscrew tail can make this difficult, often vessels are cut along with the vertebrae and bleeding is controlled afterward. Small vessel hemorrhage can be managed using electrosurgery, but larger (>2 mm) hemorrhaging vessels should be ligated using absorbable suture. After amputation is complete, the surgical site is first palpated to ensure a smooth cut and then copiously lavaged.

Closure begins with a deep SC layer covering the surgical site, using fine absorbable monofilament suture (ie, poliglecaprone 25) in a buried cruciate pattern. In many dogs, a second SC closure is completed using the same technique. The subcuticular layer is then closed using fine absorbable monofilament suture in a continuous pattern. Finally, the skin is closed using either an intradermal pattern or interrupted external skin sutures. Accurate appositional closure is paramount, as the surgical site is in close proximity to the anus, making it a high-risk region for infection.

The incision can be covered with antibiotic ointment to provide a hydrophobic barrier following skin closure. The patient should wear an Elizabethan collar for 2 weeks (ie, while the incision heals). 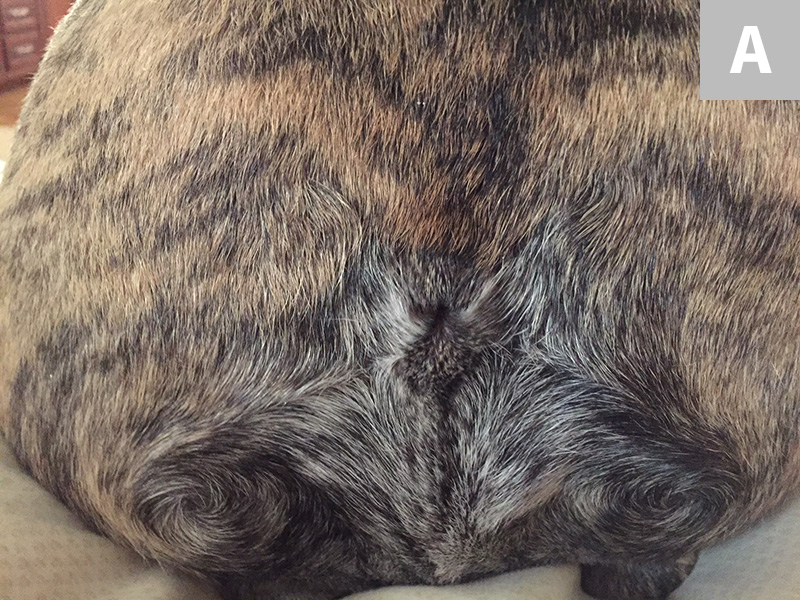 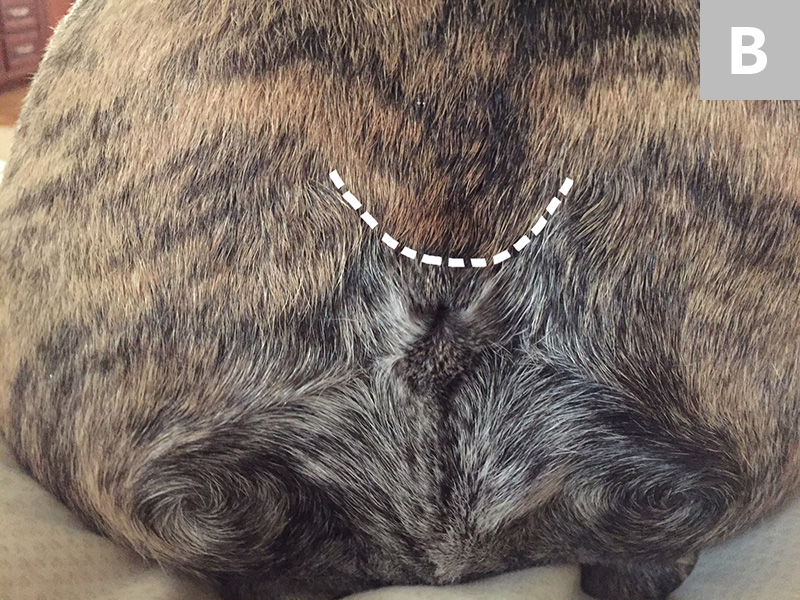 Figure B is the same image with the initial skin incision indicated by the white dashed line.

Figure B is the same image with the initial skin incision indicated by the white dashed line.