Sudden Onset of Fear & Panic in a Bernese Mountain Dog

Amy L. Pike, DVM, DACVB, is owner of the Animal Behavior Wellness Center in Fairfax, Virginia. She earned her DVM from Colorado State University. Dr. Pike was a captain in the US Army Veterinary Corps and was responsible for US customs and border patrol horses as well as military working dogs. She has since worked exclusively in small animal practices, with intense focus on canine and feline behavior, and has been board certified since 2015.

Luna, a 9-month-old, 60-lb (27-kg) intact female Bernese mountain dog, had a sudden onset of severe fear and panic toward new elements in her environment, unfamiliar humans, and riding in a car after she fell from a moving vehicle at 4 months of age.

Prior to Luna falling out of the car, her owners reported that she was normal, quickly accepted unfamiliar humans, and appeared to enjoy riding in the car. After falling, Luna began to startle, back up, bark, and growl when encountering novel items (eg, a plastic bag blowing in the wind); pant, bark, growl, and attempt to hide when unfamiliar humans entered the home; and back up, cower, tremble, pant, and profusely drool when being lifted into and riding in the car. She also appeared fearful when walking underneath objects (eg, trees, entryways). These behaviors continued for the next 5 months, at which time she was presented to a behavior clinic.

Luna was initially presented to an emergency veterinary clinic after the fall. Diagnostic evaluation (including CBC, serum chemistry profile, and urinalysis) was performed, and all results were within normal limits. Because there was possible head trauma from the fall, she was also referred to a neurologist where a brain MRI was completed—results were also within normal limits.

Physical and neurologic examination findings at the time of presentation to the behavior clinic were also within normal limits. Behavior signs in the examination room included panting, pinning her ears back, cowering near her owners, and being unwilling to interact with staff or take treats during the consultation; her pupils were also dilated (Figure). An FAS (ie, Fear, Anxiety, and Stress) spectrum and pain algorithm was used (see Suggested Reading), on which Luna scored an FAS 4: severe. 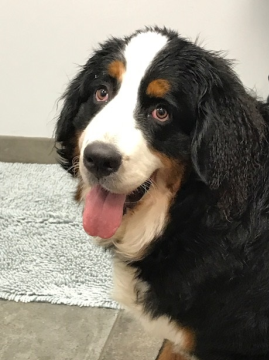 FIGURE Luna with dilated pupils, panting, and pinned back ears; these signs persisted throughout the consultation.

FIGURE Luna with dilated pupils, panting, and pinned back ears; these signs persisted throughout the consultation.

Based on patient history, and because the behavior issues were persistent and did not resolve, chronic post-traumatic stress disorder (PTSD) was diagnosed.

Treatment for behavior issues should include environmental management, behavior modification, and medical therapy.

Environmental management is important for elimination of unwanted behavior, as well as elimination (as much as feasible) of fear, anxiety, and frustration that are often the underlying cause of behavior concerns. Learning can only take place when the patient is not experiencing a high level of emotional arousal; thus, environmental management is the first step in treatment, before behavior modification can be started.

Luna’s owners were instructed to attempt to avoid triggering situations during the treatment period, including not having guests in the home, not driving Luna in the car, and taking Luna on walks during nonpeak hours. Her owners were told to remove her from triggering encounters as quickly as possible.

Behavior modification involves either teaching an alternate incompatible behavior to replace the unwanted behavior or altering the emotional state from one that is negative to one that is positive or neutral (ie, desensitization and counterconditioning [DSCC]).

Initial behavior modification techniques were focused on additional management strategies, including teaching Luna to wear a basket muzzle and perform an emergency U-turn (ie, a 180-degree turn away from the trigger/stimulus). Further behavior modification was delayed until Luna’s anxiety was low enough to remain under threshold (ie, the level at which emotional arousal is too high and a negative reaction occurs). Once Luna’s anxiety was under control, DSCC for her triggers could begin (see Desensitization & Counterconditioning for a Trigger).

DESENSITIZATION & COUNTERCONDITIONING FOR A TRIGGER

To address Luna's fear of plastic bags, the distance at which she had no negative reaction toward the bag was determined. The bag was presented to her at that distance, her owner fed her a high-value reward, and the bag was removed when she stopped feeding. Once Luna developed a positive emotional response to the presence of the bag (as a result of receiving a high-value reward), criteria were increased, including bringing the bag closer to her or having the bag make noise or move. Luna was kept under threshold for reaction, and focus was kept on creating a positive emotional response before moving to next steps.

Treatment for dogs with chronic PTSD and other phobias can be challenging, and the correct medications and products are needed for behavior modification.

Luna was started on the following:

Nutraceuticals and pheromones may augment medical therapy and potentially improve outcomes when combined with other treatment modalities.11

After 4 weeks, sertraline was increased to 50 mg twice daily (≈2 mg/kg PO every 12 hours) based on an ≈60% reduction in intensity of fear and anxiety, as well as a continued need for improvement. All other drugs and products were continued at the starting dosages. Luna’s owners reported a decrease in the intensity of reactions to triggers and slightly decreased time of recovery, but attempts at DSCC were still unsuccessful. Management was still difficult due to the numerous triggers Luna experienced daily; this was partly due to living in an apartment complex in a major metropolitan area and the need to walk Luna for elimination purposes on a busy street.

Once Luna’s anxiety was lowered and she was able to be under threshold while at a reasonable distance from triggering situations, a program of DSCC to specific triggers (eg, riding in a car, meeting new people, going through thresholds and under trees) was implemented.

Despite moderate improvement in fear intensity and ability to recover when triggered, Luna’s owners chose to relinquish her because they lived in an urban area in which she was exposed to triggers daily and because they were first-time dog owners who felt overwhelmed by her continued need for behavioral care. Luna’s breeder assisted in rehoming her with a family in a suburban area in which management could be more easily accomplished. Luna had significant progress with the new family, presumably due to the combined effect of being in a new environment, ongoing medical therapy, and the new owner’s commitment to the prescribed behavior modification plan. Alprazolam was rarely needed; however, her owners continued sertraline and other products because of Luna’s progress and the owner’s hesitance for potential setbacks.

Canine PTSD is diagnosed based on the patient experiencing a potentially traumatizing event and subsequently developing signs like hypervigilance, aggression, compulsive disorders, sleep disturbance, increased startle response, fear, avoidance, and/or withdrawal. These signs persist >1 month after the traumatic event and are not present prior to the event. Similar experiences in humans should be used as criteria when diagnosing PTSD. Prevalence of PTSD in dogs is widely unknown due to lack of retrospective studies.12

Sudden onset of behavior is usually an indicator that a thorough medical workup is needed. Once medical etiologies have been ruled out and diagnostic criteria for behavior disorders are met, treatment can be started to alleviate and modify signs.