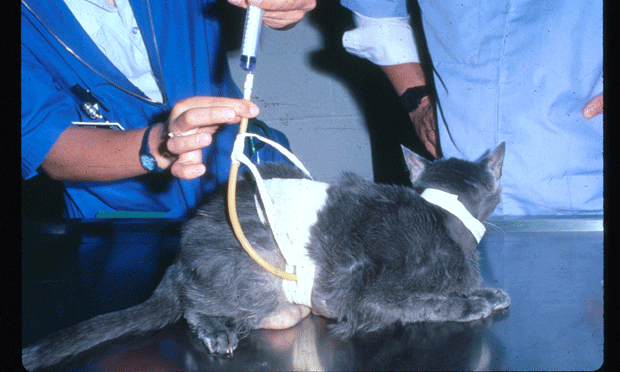 Incidence/Prevalence. 1% to 3% of all cats; in geriatric populations at referral institutions, CKD may affect up to 35% of cats.

Age and Range. All ages can be affected; however, most CKD is acquired and therefore more common in geriatric cats (> 8 years).

Gender. No difference has been reported. 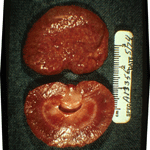 Causes & Risk Factors
Causes are often difficult to determine since the structural and functional endpoint of irreversible nephron damage is the same. Renal diseases that have been associated with the development of CKD in cats include amyloidosis, glomerulonephritis, primary tubulointerstitial disease, ascending urinary tract infections (bacterial pyelonephritis), nephrolithiasis, polycystic kidney disease, feline infectious peritonitis, and neoplasia.

Pathophysiology
Nephron damage associated with CKD is usually irreversible and can be progressive (stage I and early stage II CKD may not be progressive, but later stage II to IV is almost always progressive). Renal failure results when three quarters or more of the nephrons of both kidneys are not functioning. Whether the underlying CKD primarily affects glomeruli, tubules, interstitial tissue, or renal vasculature, irreversible damage to any portion of the nephron renders the entire nephron nonfunctional. Healing of irreversibly damaged nephrons occurs by replacement fibrosis.

Progressive diseases that destroy nephrons at a slow rate allow intact nephrons to undergo compensatory hypertrophy which can delay the onset of renal failure. When renal failure finally occurs, the nephron hypertrophy can no longer maintain adequate renal function and < 25% of the original nephrons are functional.

The pathophysiology of CKD can be considered at both the organ and systemic level. At the level of the kidney, the fundamental pathology of CKD is loss of nephrons and decreased glomerular filtration. Reduced glomerular filtration results in increased plasma concentrations of substances that are normally eliminated from the body by renal excretion (eg, creatinine, urea nitrogen, and phosphorus). In addition to excretion of metabolic wastes and maintenance of fluid and electrolyte balance, the kidneys also function as endocrine organs and catabolize several peptide hormones. Thus, hormonal disturbances also play a role in the pathogenesis of CKD. Examples include decreased production of erythropoietin, which contributes to the nonregenerative anemia of CKD, decreased metabolism, and excretion of parathyroid hormone and gastrin, which contribute to osteodystrophy and gastritis, respectively.

Finally, part of the pathophysiology of CKD is brought about by compensatory mechanisms. For example, osteodystrophy occurs secondary to hyperparathyroidism, which develops in an attempt to maintain normal plasma calcium and phosphorous concentrations. Similarly, the individual glomerular filtration rate of intact nephrons increases in CKD in an attempt to maintain adequate renal function; however, proteinuria and glomerulosclerosis may be consequences or "trade-offs" of this hyperfiltration.

Signs
History. Dependent on the stage of CKD (see Table 1). History is often unremarkable in stage I and early stage II. In later stage II and beyond, history may include anorexia, weight loss, vomiting, polydipsia, and polyuria.

Physical examination. Dependent on the stage of CKD (see Table 1). Physical exam may be normal in stage I and early stage II. In later stage II and beyond, findings may include dehydration; poor body condition; uremic breath; oral ulcers; and small, firm, irregularly-shaped kidneys. Hypertensive retinopathy is possible.

Pain Index
In general, the kidneys of cats with CKD are not painful (exceptions may include lymphosarcoma causing renal swelling and the presence of nephroliths or ascending infections). Gastrointestinal irritation can result in mild to moderate pain; oral ulcers may be quite painful. 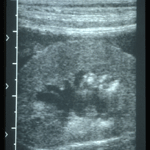 Definitive Diagnosis
Definitive diagnosis is traditionally based on loss of > 75% of the patient's nephrons, resulting in persistent azotemia superimposed on an inability to concentrate urine (USG < 1.035 to 1.040) along with chronic clinical signs of weight loss and polydipsia/polyuria. Preazotemic CKD may also be diagnosed in cats with persistent renal proteinuria, urine concentrating deficits, increases in serum creatinine over time even if the values remain in the normal range (eg, serum creatinine that increases from 0.6 to 1.2 mg/dl could indicate a 50% reduction in GFR), or renal abnormalities noted on palpation or ultrasound. The International Renal Interest Society (IRIS) has developed a staging system for feline CKD; it is based primarily on serum creatinine concentrations in stable, well-hydrated cats (Table 1).

Serum creatinine concentrations should always be interpreted in light of the patient's USG, muscle mass, and physical examination findings in order to rule out pre- and postrenal causes of azotemia. The stages are further classified by the presence or absence of proteinuria and systemic hypertension in Table 2.

Laboratory Findings/Imaging
In addition to the azotemia and inability to concentrate urine, nonregenerative anemia, hypokalemia, metabolic acidosis, and hyperphosphatemia are frequently observed. Small and irregularly shaped kidneys are often observed on radiographs and renal ultrasound findings may include increased cortical echogenicity with loss of the corticomedullary junction. Ascending infections may result in pyeloectasia on ultrasound and calcium oxalate nephroliths may be observed by radiographs and/or ultrasound.

Renal histology: Morphologic heterogeneity between nephrons exists in CKD with changes ranging from severe atrophy to marked hypertrophy. Histologic changes are not process specific and, therefore, an etiologic diagnosis is frequently not possible.

Depends on the severity of the patient's clinical signs. Many cats with CKD are better suited to outpatient treatment versus hospitalization.

Follow-Up
Patient Monitoring
May range from 2 to 4 times/year in early stage CKD to several times per week in latter stage CKD.

Prevention
Annual wellness exams are recommended to diagnose early stage CKD; this is the time when disease-specific and renoprotective treatments have the best opportunity for success.

Course
Stage I and early Stage II CKD may be stable or progressive; later Stage II through Stage IV CKD is often progressive.

Prognosis
Guarded, as CKD is irreversible and in many cases progressive.