Radiographic Interpretation of the Canine Shoulder

Ryan King, DVM, DACVR, is a member of the veterinary staff at Tufts Veterinary Emergency Treatment & Specialties and a clinical assistant professor at Cummings School of Veterinary Medicine at Tufts University. He earned his DVM from Atlantic Veterinary College at University of Prince Edward Island and completed an internship and residency in diagnostic imaging at Tufts University. During that time, he taught courses on radiology, ultrasonography, and anatomy.

Stacie Aarsvold, DVM, DACVR, works with Puchalski Equine Imaging in Petaluma, California. She is a former staff radiologist at Cummings School of Veterinary Medicine at Tufts University, where she also completed a radiology residency. Dr. Aarsvold earned her DVM from University of California, Davis. Her special interests include musculoskeletal and equine imaging. 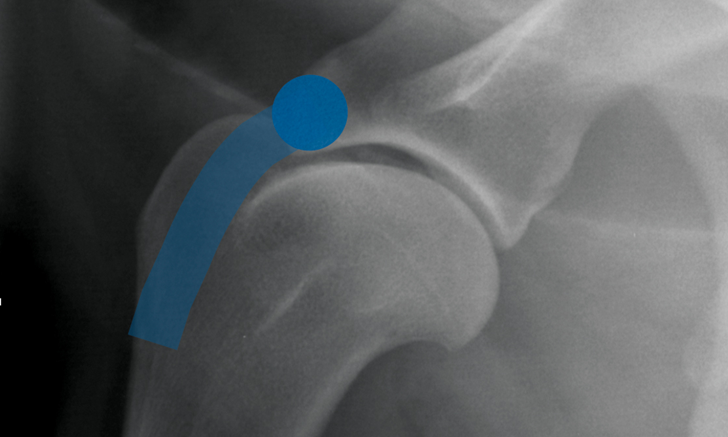 Before radiography, the clinician should review the anatomy of the canine shoulder. The shoulder consists of a simple ball-and-socket joint between the humeral head and the glenoid cavity and is surrounded by a fibrous joint capsule. The adjacent musculature stabilizes the joint and extends and/or flexes the thoracic limb. The joint is extended by the supraspinatus and infraspinatus muscles and flexed by the triceps muscle, with concurrent flexion and extension of the elbow by the biceps and triceps muscles, respectively.1

The proximal biceps tendon originates from the supraglenoid tubercle and traverses the cranial aspect of the proximal humerus in the intertubercular groove, where, at the musculotendinous junction, it forms the biceps muscle. Mineralization may occur at any point along the length of the tendon but is commonly noted both superimposed with the groove and at the tendon origin (Figure 1).1 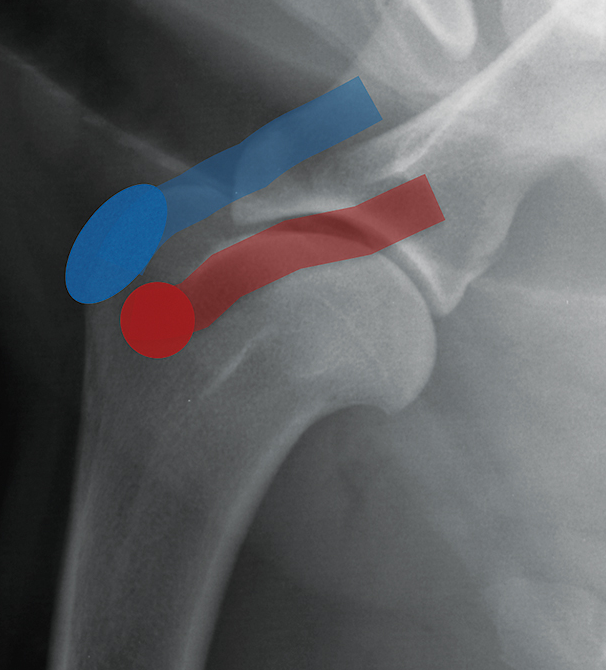 Tendinopathies typically occur in older, active, and working dogs, typically of large breeds. Pain usually can be elicited on flexion, extension, and palpation of the shoulder. Disease occurs most commonly in the proximal biceps and supraspinatus tendons but can also affect the infraspinatus tendon (Table).

Common Diseases of the Canine Shoulder

The most common site of osteochondrosis in dogs is the caudal aspect of the humeral head. Osteochondrosis typically occurs in young (<3 years of age), large-breed dogs and appears radiographically as a flattening of the caudal humeral head. A free mineral fragment may be visualized near the flattened region or more distally in the joint capsule. Free fragments are rarely seen in the intertubercular groove.

Osteochondritis dissecans is a disease that affects young dogs in which failure of endochondral ossification leads to retention and thickening of cartilaginous tissue. The cartilage may form a flap and/or free fragments in the joint. 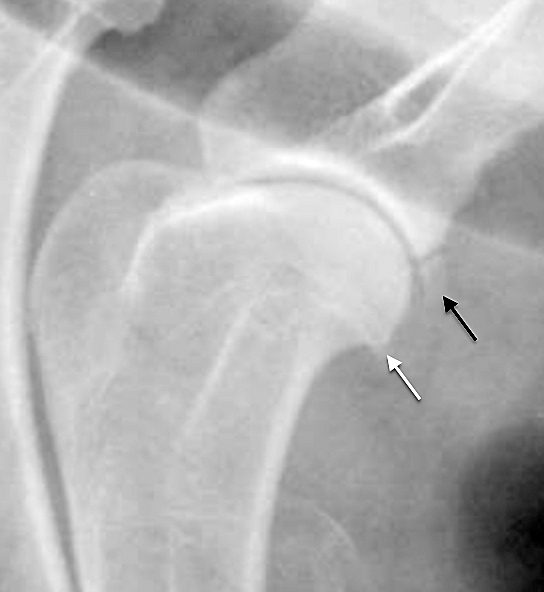 Figure 3 Lateral radiograph of a mature shoulder with a separate center of ossification in the caudodistal scapula (black arrow). Minimal osteophytosis of the caudal aspect of the humeral head (white arrow) is also present.

Less common diseases should be considered when the presentation is not straightforward. The proximal humerus is a common site for osteosarcoma. On radiographs, its appearance is highly variable, but the classic presentation shows moth-eaten–to–permeative lysis of the cortex with palisading-to-amorphous new bone formation, often along the caudal cortex. Any lesion with a lytic component in the proximal humerus should be considered suggestive of osteosarcoma. Metastatic disease more commonly appears as lesions within the metaphysis of long bones, such as near the nutrient foramen.

Infectious/septic arthritis of the shoulder joint is an uncommon disease that typically affects young, large-breed dogs. These patients often have a predisposing cause for systemic sepsis. Radiographs often show a patchy pattern of lucencies (from gas-producing bacteria) superimposed on the joint and surrounding tissues. Staged sampling of periarticular tissues should precede arthrocentesis to avoid bacterial contamination of the joint capsule.

Traumatic shoulder luxations are uncommon and are typically diagnosed on physical examination. A caudocranial radiograph with the limb in abduction can be obtained to identify medial joint capsule tearing. This radiograph must be interpreted with caution, however, as some degree of joint widening may be normal secondary to positioning because limb extension causes traction on the medial aspect of the joint.

Are you confident in your shoulder radiograph skills? Take our quiz here!