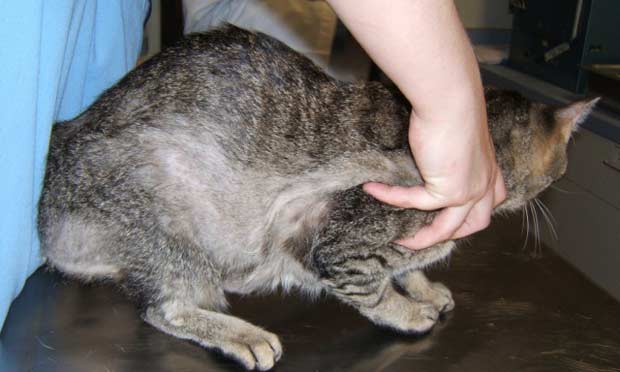 How do I know whether overgrooming is caused by psychogenic alopecia, and what are my treatment options?

The behavioral diagnosis of overgrooming in cats can involve two separate but sometimes overlapping disease states. The first disorder, psychogenic alopecia, involves excessive grooming that is psychological or emotional in origin. This alopecia generally occurs on the medial forelimbs, caudal abdomen, inguinal region, tail, and/or dorsal lumbar areas and may or may not be symmetric. Rarely will secondary skin changes be evident.

The second disorder, hyperesthesia, involves patients that manifest unusually high skin sensitivity by displaying a variety of behaviors, including twitching; rippling of the skin over the back, rump, and tail; sudden jumping and running; and occasional self-mutilation that can involve barbering of the hair.

This article focuses on the presentation and treatment of psychogenic alopecia only.

Environmental Factors
Psychogenic alopecia is likely overdiagnosed in veterinary medicine because many patients are actually affected by various hypersensitivity reactions, including those to flea, food, and environmental antigens (eg, pollen), or affected by ringworm (ie, dermatophytosis) or ectoparasites such as Demodex (demodicosis), Notoedres (mange), and Cheyletiella (cheyletiellosis).1

Underlying Pathology
True psychogenic alopecia in cats is believed to arise from underlying conflict, frustration, and anxiety. Grooming is a common displacement behavior—an “out of context” behavior that an animal performs when it is in a state of conflict/anxiety or frustration. This is usually a normal type of behavior that is displayed at an inappropriate time.

Displacement grooming is considered to be rooted in anxiety and may serve to lower the animal’s stress levels, help calm the animal, and deflect aggression from other individuals. It is common to see a cat that is in a stressful situation suddenly begin to groom (often in the veterinary exam room). Over time, this displacement behavior can become independent of the initial stressor and eventually become compulsive in nature.3

History
Because owners rarely witness excessive grooming by their cat, this part of the history may be inconclusive. However, certain psychological stressors and triggers should be considered and questioned, including a traumatic event such as a recent move, new pet or baby, loss of a family member or companion pet, and construction or remodeling. In addition, determining whether the cat is indoor or outdoor can support the likelihood of parasitic causes. Likewise, other factors need to be evaluated, such as the diet (current and past), preexisting medical conditions, and medications.

Examination
Characterizing the pattern of hair loss can help determine whether the disorder is psychogenic alopecia. If the hair loss is self-induced, then it should only be evident in areas that can be reached by the cat’s tongue. If other areas are affected, close examination of the skin can confirm or rule out the involvement of ectoparasites or other diseases.

Diagnostic Findings
After completing the clinical examination, any hairs remaining in areas of hair loss should be examined microscopically for evidence of broken shafts, which supports excessive grooming, but not the underlying cause of that grooming. Dermatophyte culture results can rule out fungal infection, whereas skin scrapings can help rule out fungal and bacterial causes as well as certain parasites. Intradermal skin testing assists in diagnosing inhalant allergies. Response to a steroid trial makes a strict behavioral diagnosis less likely. With skin biopsies, the clinician also can evaluate possible allergic reactions or endocrine disorders.

Other diagnostic measures include a hypoallergenic food trial, which involves feeding an approved home-cooked diet, novel antigen diet, or hydrolyzed protein diet for a minimum of 8 weeks (note: all treats need to be excluded from the diet). To conduct a parasiticide trial, clinicians should recommend a long-acting agent that covers ectoparasites prevalent in the geographic area, such as fleas, Cheyletiella spp, lice, and Notoedres spp.

Environmental Modification
Because psychogenic overgrooming is generally based on emotional states of stress, anxiety, and frustration, modifications are made in attempts at minimizing stressors for that particular cat. Placement of perches and climbing posts in key areas, such as in front of a window, may encourage the cat to express its natural tendency to rest on high surfaces and view its environment from above. Other simple measures to enrich a cat’s environment or offer privacy include cardboard boxes and paper bags. Providing interactive toys that stimulate prey hunt and capture (eg, toy attached to a string, fishing pole, feather wands) is recommended, and rotating them retains their novelty for the cat. Placing food and food puzzle toys in key areas can stimulate normal hunting instincts. Nontoxic cat grasses or catnip can also be offered.

In multicat environments, setting up several feeding and litter box stations can help alleviate competition and related stress among cats.

In addition to being encouraged to participate in physical and play behaviors, cats need access to a private safe haven away from other pets and children or during busy household activities. Providing a separate room that can be accessed through a cat door via sensor collar can ensure comfort and privacy in a quiet area of the home.

Behavior Modification
Predictable owner interaction and routines are recommended, including predictable feeding, play sessions, and attention. Training a cat to follow certain commands, such as sit and come, can be engaging and stimulating.

Discipline/punishment is an obvious source of conflict that may exacerbate stress and lead to overgrooming and subsequent psychogenic alopecia. Owners also need to avoid reinforcement of unwanted behavior by not rewarding the cat with attention when it engages in excessive grooming. Instead, the cat should be distracted and encouraged to pursue an alternative activity.

Pharmacologic Intervention
Off-label use of fluoxetine, a selective serotonin reuptake inhibitor, or clomipramine, a tricyclic antidepressant, has been successful in the treatment of psychogenic alopecia in conjunction with concurrent environmental and behavioral modifications.

The following off-label dose schedule can be discussed with owners:

For both drugs, allow 4 to 6 weeks to evaluate effectiveness.

Tx at a Glance

KELLY MOFFAT, DVM, DACVB, is medical director of VCA Mesa Animal Hospital in Mesa, Arizona, where she is a general practitioner and behavior consultant. Dr. Moffat received her DVM from Colorado State University College of Veterinary Medicine; she was board certified in veterinary behavior in 2004.