ANDREW ROSENBERG, DVM, DACVD, is the practice owner of Animal Dermatology & Allergy Specialists and practices in both the Riverdale, New Jersey, and Westchester County, New York, locations. He earned his Bachelor of Science with distinction in research and his DVM from Cornell University and completed a residency with Animal Dermatology Clinic in Tustin, California. Dr. Rosenberg received the ACVD Resident Research award for his work in cyclosporine-associated gingival overgrowth and currently serves as the chair for the ACVD education committee. His clinical interests include allergies and autoimmune skin diseases. Dr. Rosenberg also treats skin conditions of animals in zoos and wildlife centers on a volunteer basis. 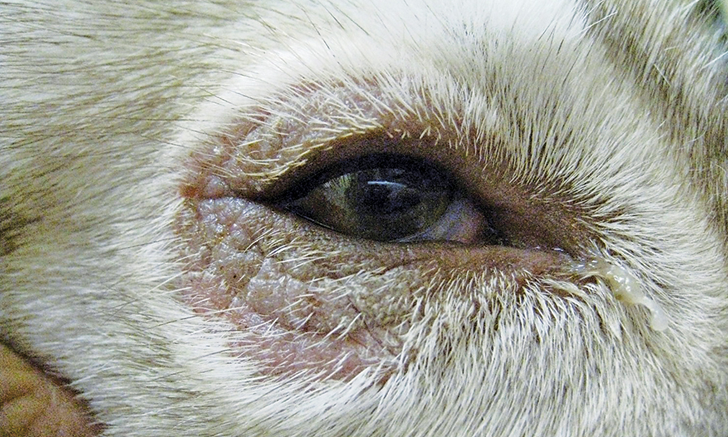 Trooper, a 3-year-old 67-lb (30.5-kg) intact male Siberian husky, was presented to the dermatology clinic for skin lesions around the eyes. Lesions were first appreciated ≈4 months prior to presentation and showed no response to amoxicillin/clavulanic acid or cefpodoxime, which were prescribed by the primary veterinarian. Treatment with combined trimeprazine/prednisolone twice daily and tapered over 1 month resulted in partial improvement. The affected areas were only mildly pruritic. According to the owner, the lesions around the eyes had worsened, and the scrotum had become inflamed in the previous 4 months.

On examination, Trooper was bright, alert, and responsive. All peripheral lymph nodes were normal. Periocular regions were alopecic with mild to moderate crusting (Figure). The pinnae were moderately erythematous on the concave surface with mild adherent scaling. The scrotum was severely erythematous. All paw pads were crusted. The remainder of the examination was unremarkable. 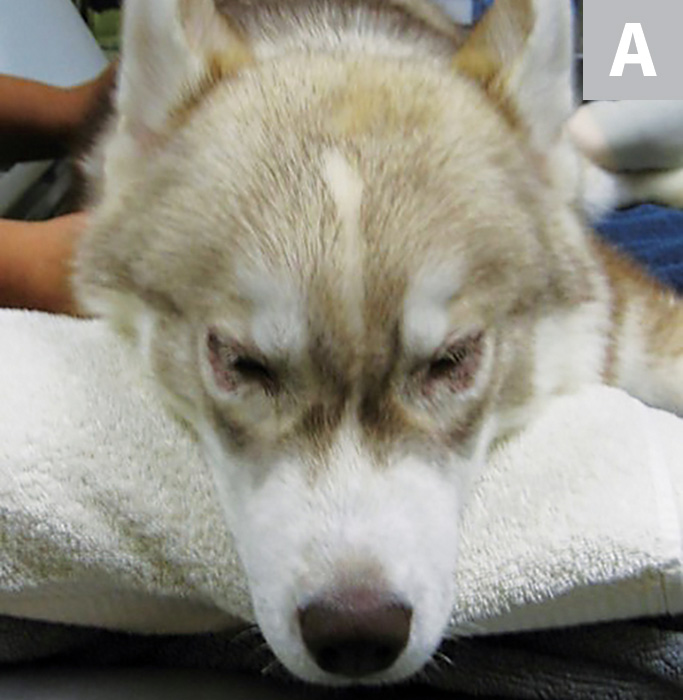 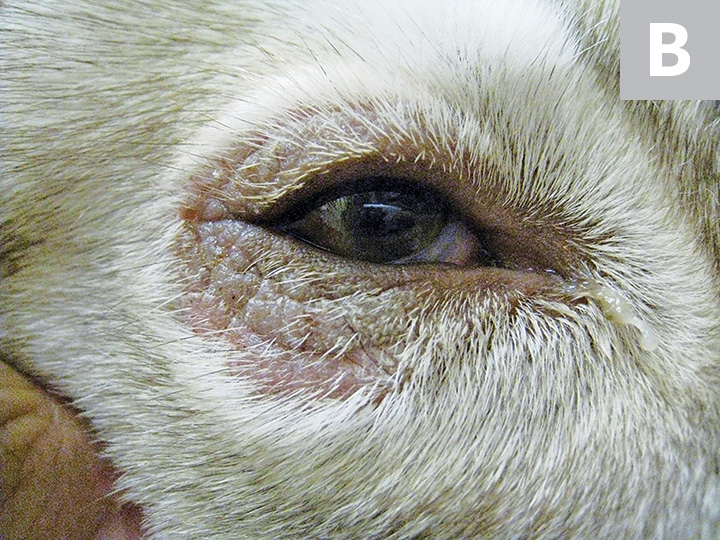 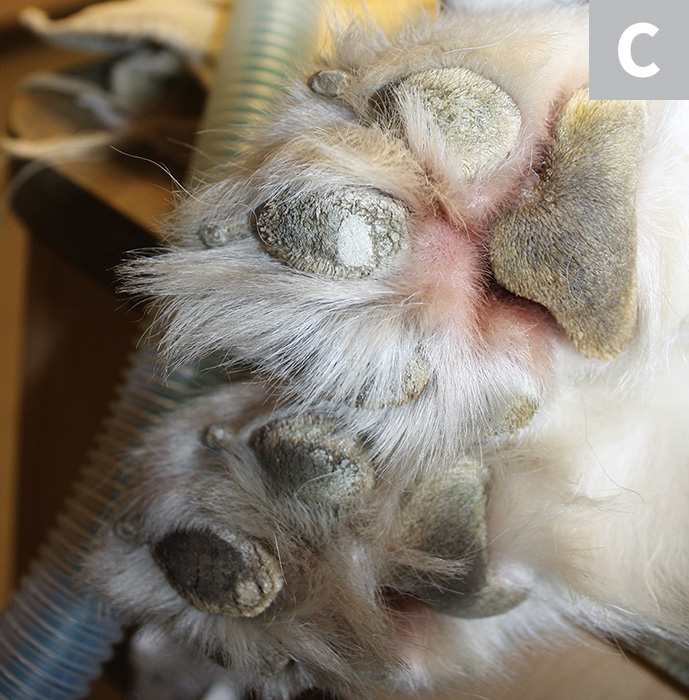 Evaluation of an impression smear of the periocular region revealed numerous cocci with streaming neutrophils. A deep skin scrape was negative for ectoparasites. Skin biopsies were discussed with Trooper’s owner; however, superficial pyoderma was initially treated prior to biopsy to ensure accurate results. Bacterial culture and susceptibility testing was performed on the lesions to guide therapy.

Four days after initial presentation, culture results revealed methicillin-resistant Staphylococcus schleiferi (Table). Treatment with chloramphenicol (40 mg/kg every 8 hours) was initiated. In addition, the owner was instructed to bathe Trooper weekly using a 3% chlorhexidine/phytosphingosine shampoo. Due to the location of the periocular lesions, topical therapy did not seem appropriate as the sole means of eliminating pyoderma.

Infection had improved significantly 2 weeks after initial presentation, and Trooper was returned to the clinic for punch biopsies (6 mm) of the affected areas, performed while he was under sedation. The specimens were submitted for histopathology, which confirmed zinc-responsive dermatosis (see Histopathology Results of Punch Biopsies Indicating Marked Parakeratotic Hyperkeratosis).

Three specimens of haired skin obtained via punch biopsy were evaluated histologically. In all biopsy samples, marked parakeratotic hyperkeratosis that expanded to the follicular infundibula and into the intrafollicular stratum corneum was apparent. The epidermis was moderately spongiotic, and mild acanthosis and leukocyte exocytosis were observed. The superficial dermis was markedly expanded by edema and a mild interstitial chronic inflammatory infiltrate of small lymphocytes, plasma cells, and fewer granulocytes. Many superficial dermal fibroblasts were plump and reactive; this type of superficial dermal expansion can give the skin surface a papillated appearance. Multifocal small inflammatory aggregates associated with adnexa were observed in 2 sections throughout the dermis; these inflammatory cells included epithelioid macrophages, lymphocytes, plasma cells, and neutrophils. Free keratin (ie, furunculosis) was observed in one of these foci.

Chloramphenicol therapy was continued for 4 weeks, including 1 week after resolution of clinical signs of infection and cytologic cure. Supplementation with zinc methionine (elemental zinc, 3 mg/kg once daily [dose can be split and given every 12 hours]) was initiated (see Treatment at a Glance).1-3

Trooper was rechecked 1 month after zinc therapy was initiated; lesions showed some improvement, and evaluation of an impression smear confirmed the absence of bacteria. Low-dose methylprednisolone (initial dose, 0.7 mg/kg once daily) was initiated and tapered over 1 month. In many cases, low-dose corticosteroids can be beneficial for treatment of dogs that do not respond to zinc alone,4 as corticosteroids are known to increase zinc absorption from the GI tract.

Zinc-responsive dermatosis syndrome I is a condition that occurs primarily in Alaskan malamutes, Siberian huskies, and other arctic breeds and may be associated with defective intestinal absorption of zinc.1,2,5

Syndrome II occurs in dogs fed a zinc-deficient diet.1,2,6 The author has anecdotally seen an increase in the number of syndrome II cases that may be a result of an increase in dogs being fed home-prepared and alternative diets. Lesions are typically located at mucocutaneous junctions and paw pads and appear as areas of erythema with scaling, crusts, and hyperkeratosis.

The discussion continues on Clinician's Brief: The Podcast

Hear the author lay out the specialist’s perspective on initial work-up and eventual diagnosis in this episode of Clinician's Brief: The Podcast. Plus, Dr. Rosenberg covers the bread-and-butter clinical tools of veterinary dermatologists and shares his insights on how telehealth translates to dermatology.

Zinc-responsive dermatosis should be on the differential diagnosis list for crusted skin disease in any northern- or arctic-breed dog (see Take-Home Messages). Diagnosis is made through history and biopsy. Serum or hair levels of zinc may be low in affected patients; however, proper analysis can be difficult due to a variety of factors, so biopsy is the recommended diagnostic test if zinc-responsive dermatosis is suspected.7