DEFINITION
Cherry eye is clinically defined as a prolapsed gland of the third eyelid. The term cherry eye was coined because the prolapsed gland looks like a cherry located near the medial canthus. The gland, which under normal circumstances hugs the base of the T-cartilage in the third eyelid and sits adjacent to the orbital rim, becomes obvious to the owner after prolapse.

SIGNALMENT
Breed and Age. Cherry eye can occur in many breeds of dogs but is most common in young cocker spaniels, Lhasa apsos, Shih Tzus, bulldogs, mastiffs, beagles, shar-peis, Pekingese, Boston terriers, and St. Bernards.1 It is much less common in cats, but it occasionally occurs in Burmese, Siamese, and Persians. Although the problem can occur at any age, it is most common in animals 2 years of age or younger and can be unilateral or bilateral at initial presentation. Very young puppies often present with a prolapsed gland.

Genetic Implications. Although the precise mechanism by which cherry eye is inherited is unknown, the breed predisposition implies some type of genetic mechanism. The Canine Eye Registration Foundation, the national purebred eye registry, does not define the genetics of the problem and advises "breeder option" for breeding purposes, meaning that the actual inherited mechanism is unknown, but that the problem frequently occurs in that particular breed. As it occurs almost exclusively in Burmese, Siamese, and Persian cats, the problem is probably genetic in cats as well.

PATHOPHYSIOLOGY
The anatomical structures that anchor the gland of the third eyelid in its normal position and the pathogenesis of their failure are poorly understood. The gland is classified as seromucoid in dogs and contributes an estimated 30% to 57% to aqueous tear production.1,2 It has recently been shown that removal of the gland or leaving the prolapsed gland in situ predisposes the patient to KCS, a common complication associated with cherry eye.3 KCS requires lifelong treatment, usually with topical cyclosporine, corticosteroids, and ocular lubricants.

CLINICAL SIGNS
Appearance of a round, smooth, red mass near the medial canthus of a young dog, especially in high-risk breeds, is highly suggestive of a prolapsed gland of the third eyelid (Figure 1). Inflammation of the gland with swelling and redness may be present, but often the gland looks relatively normal, with a smooth, pink conjunctival surface. As the gland remains prolapsed for an extended period (months to years), the exposed conjunctiva overlying the gland often becomes pigmented, but there is no evidence of ocular pain. The gland usually remains prolapsed but occasionally repositions itself naturally or with gentle digital massaging. Even after repositioning, prolapse tends to recur. 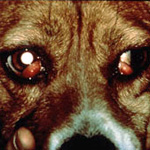 Schirmer tear tests should be done on both eyes to assess reflex tear production and to determine if tear production has decreased or if the patient has developed KCS. After clearing away any significant buildup of mucus with a dry tissue, the test is done as follows: Place the Schirmer tear test strip on the nonanesthetized eye before instillation of any solutions. Hold the strip in place for 60 seconds. Any value greater than 15 mm of wetting per minute is considered normal. Fluorescein staining should also be done to evaluate the effect of decreased tear production on the corneal surface.

Differential Diagnosis
Cherry eye can be confused with everted cartilage of the third eyelid. Everted cartilage also occurs in many breeds but is overrepresented in German shepherds, Great Danes, shar-peis, Weimaraners, German shorthaired pointers, and other large breeds. Great Danes, shar-peis, and mastiffs present with both problems. However, careful observation allows differentiation between bent, everted cartilage and a prolapsed gland. Other differential diagnoses include follicular conjunctivitis, plasmoma, and neoplasia.

HISTORY
The proper way to manage cherry eye was controversial for many years until it was determined that the gland is responsible for a significant amount of tear production in dogs. For years, practitioners either removed the gland or allowed the gland to remain prolapsed, but these approaches resulted in a high rate of KCS.3 Surgical replacement of the gland is now the overriding management strategy.

MANAGEMENT PHILOSOPHY
Personal clinical experience with cherry eye has resulted in the following management approach: Very young puppies (birth to about 3 months) presenting with unilateral cherry eye for a short duration that have no complications are not immediately treated because the gland in the other eye is likely to prolapse in the near future. If or when the other gland prolapses, surgical repair (see below) can be done as soon as the surgeon feels comfortable anesthetizing the small patient and handling the patient's tissue. Watchful waiting can also be used to manage older puppies and adults that have had unilateral prolapse for a short duration (less than about a month), but if prolapse occurred more
than a month previously, surgery is recommended. Bilateral prolapses are always surgically repaired at the same time. 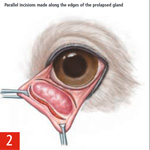 SURGERY
Three basic surgical techniques have been described, but many variations have been reported. The basic methods include orbital rim anchoring; scleral anchoring; and, most recently described, the pocket method.3-6 The method chosen is largely a matter of personal preference, but in a series of surgical corrections of 125 cases of cherry eye, the pocket method was the most successful (94%, compared with 41% with the scleral anchoring method, independent of surgeon3).

In brief, the pocket method involves parallel incisions made anterior and posterior to the gland along the bulbar aspect of the third eyelid conjunctiva. The gland is then easily tucked into the pocket using a dry cotton-tipped applicator, and the conjunctival edges are sutured closed using a continuous suture pattern with the knots tied on the palpebral surface to avoid abrading the cornea (Figures 2 and 3). Absorbable suture, such as 5-0 Vicryl, is used by most ophthalmic surgeons; however, 6-0 suture is more appropriate for cats, puppies, and small dogs. Some surgeons recommend a second row of sutures, suggesting a higher success rate. Some ophthalmologists suggest leaving the two ends of the incision open to allow tears to escape more easily from the created pocket. Postoperative triple antibiotic ointment is applied two to three times daily for 2 to 3 weeks. 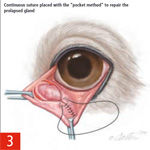 PATIENT MONITORING
An Elizabethan collar should remain in place. The patient is examined 2 weeks after surgery to ensure proper healing without corneal ulceration. 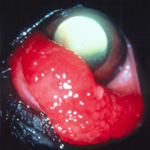 PROGNOSIS
Morgan and colleagues reported that only 10% of eyes in which the gland was repositioned developed KCS, whereas a total of 85% of patients with glands that were excised or that remained prolapsed developed KCS.3 The owner should be warned that recurrence is the most common complication of surgery. Corneal ulceration from suture abrasion can also occur, and the owner should observe the patient for postoperative squinting and discharge. Although there has been no report of the success rate of surgical procedures according to breed, large-breed dogs and dogs with preoperative inflammation of the gland seem to be most likely to have recurrence (Figure 4). Cases of cherry eye in bulldogs and mastiffs seem to be most difficult to manage, and the surgeon may elect to pretreat the inflamed gland with topical corticosteroids to improve success.

CONCLUSION
Prolapsed gland of the third eyelid-cherry eye-is most common in certain purebred dogs and cats, either as unilateral or bilateral disease. Since the gland is responsible for a significant amount of tear production, the gland should be surgically re-placed to prevent development of KCS, a disease requiring lifelong treatment.


PHOTO CREDITS
Figures 2 and 3. Adapted from Prolapse of the gland of the third eyelid in dogs: a retrospective study of 89 cases. Morgan R. JAAHA 29:57-58, 1993, with permission from the American Animal Hospital Association.

5. Effectiveness of a modification of the Blogg technique for replacing the prolapsed gland of the canine third eyelid. Gross SL. Proc Am Coll Vet Ophthal 13:38-42, 1983.