Juvenile Generalized Demodicosis in a Dog

ANDREW ROSENBERG, DVM, DACVD, is the practice owner of Animal Dermatology & Allergy Specialists and practices in both the Riverdale, New Jersey, and Westchester County, New York, locations. He earned his Bachelor of Science with distinction in research and his DVM from Cornell University and completed a residency with Animal Dermatology Clinic in Tustin, California. Dr. Rosenberg received the ACVD Resident Research award for his work in cyclosporine-associated gingival overgrowth and currently serves as the chair for the ACVD education committee. His clinical interests include allergies and autoimmune skin diseases. Dr. Rosenberg also treats skin conditions of animals in zoos and wildlife centers on a volunteer basis. 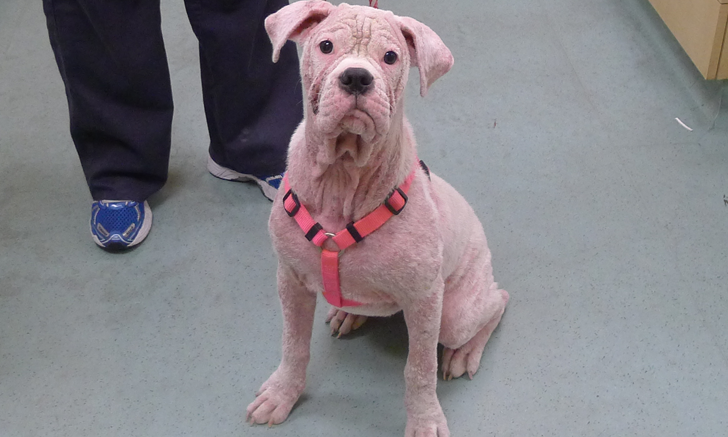 A 6-month-old spayed American pit bull terrier crossbreed is presented for evaluation of severe pruritus and multifocal areas of alopecia and erythema. When the owners rescued the dog 2 months prior, the dog was pruritic around the eyes and licked its paws. The skin has since become progressively worse and the dog has gotten progressively more pruritic. The owners have been feeding a strict limited-ingredient diet without improvement.

Physical examination reveals crusts on the lateral cervical region and diffuse erythroderma. All distal limbs and both dorsal and ventral aspects of all paws are severely erythematous and crusted. The ventral abdomen and inguinal region have multifocal papules and pustules. An impression smear reveals intracellular and extracellular cocci bacteria (too numerous to count) with streaming neutrophils. Deep skin scrapings from the right forepaw and dorsal muzzle reveal 15 live adult Demodex canis mites, 2 juvenile Demodex canis mites, and 5 Demodex canis eggs per slide.

Which of the following drugs would be appropriate for this patient?

Correct ResponseDo Not UseAlthough glucocorticoids are frequently used to help relieve pruritus, juvenile-onset generalized demodicosis is caused by underlying immune dysregulation, and glucocorticoid use could further suppress the immune system and exacerbate the demodicosis. Thus, prednisone is contraindicated in the treatment of demodicosis. In addition, this patient’s pruritus is likely caused by secondary bacterial infection, which prednisone would have no effect on.

Correct ResponseDo Not UseOclacitinib is frequently used to relieve pruritus. However, it is labeled for the control of pruritus associated with allergic dermatitis and control of atopic dermatitis, not for pruritus associated with demodicosis and bacterial infection, as in this patient. It is also labeled for dogs at least 12 months of age. Oclacitinib may actually increase the patient’s susceptibility to infection and demodicosis1 and may exacerbate demodicosis; its use is contraindicated in the treatment of demodicosis. A higher demodicosis incidence was noted when juvenile dogs were treated with elevated oclacitinib doses for extended time periods.1

Correct ResponseProceed with CautionLokivetmab is a monoclonal antibody that acts against interleukin-31, the “itch cytokine.” It is labeled for treatment of chronic itch due to allergic or atopic dermatitis. Lokivetmab may be effective at reducing this patient’s pruritus, but this use would be extra-label. Adverse effects are minimal, so use could be considered in this case to help improve the patient’s quality of life.

Correct ResponseProceed with CautionUntil recently, high-dose ivermectin, when well-tolerated, was the treatment of choice for demodicosis in dogs. Although it is effective, some dogs are sensitive to the drug and may experience side effects such as ataxia, mydriasis, tremors, stupor, hypersalivation, and respiratory arrest. These adverse effects are most commonly seen in dogs that are homozygous for a genetic defect in the multidrug sensitivity gene (MDR1 gene, also known as ABCB1-1 gene) that encodes for a p-glycoprotein pump that is an essential part of the blood–brain barrier. Dogs can be tested for the MDR1 mutation via submission of a cheek saliva swab. However, some dogs with normal MDR1 genotype still experience ivermectin sensitivity, so alternative mechanisms for increased sensitivity are likely.2 Although ivermectin can be used in this patient, there are safer treatment options with similar efficacy. Care should be used with ivermectin when the patient’s MDR1 status is unknown.

Correct ResponseSafeAlthough extra-label and not approved for treatment of demodicosis, new acaricides belonging to the isoxazoline class of parasiticides are the treatment of choice for generalized demodicosis.3-7 Isoxazolines acaricides function by selective inhibition of arthropod γ-aminobutyric acid– and L-glutamate–gated chloride channels. They have been shown to be effective for the treatment of generalized demodicosis in dogs.3-7 Administration of each medication should follow the normal recommendations for flea and tick control for each individual medication. Adverse effects of isoxazolines are rare, but can include vomiting and diarrhea. Isoxazolines have also been associated with neurologic adverse reactions, including tremors and seizures in rare cases.8

Correct ResponseProceed with CautionAmitraz is the only licensed product in the United States for the treatment of generalized demodicosis. Its use has been associated with numerous adverse events, including sedative effects, allergic skin reactions, increased pruritus, hypothermia, hypotension, bradycardia, and hyperglycemia. Exposure to amitraz can also cause side effects (eg, migraine-like headaches, asthma attacks) in humans administering the medication. Because of these effects, the time-intensive administration, and availability of more effective alternatives, amitraz is not frequently used, and the commercial manufacturer discontinued sale of the drug in the United States in 2018. Although amitraz can be used in this patient, there are safer, more effective therapies for the treatment of generalized demodicosis.

Correct ResponseDo Not UseAlthough the impression smear was consistent with a bacterial infection (ie, secondary pyoderma), enrofloxacin—and all other fluoroquinolones—should not be used in this patient. Fluoroquinolones are considered second-tier antimicrobials that should only be used when topical therapy and first-tier systemic antimicrobials are not appropriate and supported by cultures and susceptibility panels. Fluoroquinolones have been associated with the development of methicillin resistance in Staphylococcus spp bacteria.9 In addition, fluoroquinolones should be used with caution in young, growing puppies due to the potential for cartilage deformities and joint growth disorders.

Correct ResponseSafeCephalexin (a first-generation cephalosporin) or clindamycin can be considered to treat this patient’s secondary bacterial pyoderma. These are considered first-tier antimicrobials and are a good choice for empiric therapy.9 Treatment is recommended at the higher end of the dose range and should be continued for at least 1 week beyond clinical resolution.

Correct ResponseDo Not UseBecause of the potent corticosteroid (ie, betamethasone) in these combination products, localized immunosuppression can occur where the product is sprayed and cause exacerbation of the demodicosis. Therefore, its use is not recommended.

Regardless of the treatment choice for this patient’s generalized demodicosis, miticidal treatment should continue until multiple consecutive skin scrapes obtained a month apart are completely negative for all evidence of Demodex spp mites. Antibiotic therapy should continue until at least 1 week beyond clinical resolution of all superficial bacterial skin infection. Because there is a genetic component causing a predisposition to the development of juvenile generalized demodicosis, affected dogs should not be bred.