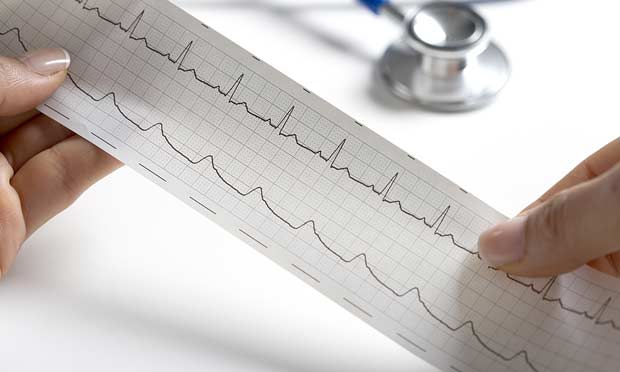 You have asked…How do I interpret ECGs with confidence?

Arrhythmias are clinically important because of their ability to compromise cardiac output and oxygen delivery to the body. The level of cardiac performance during an arrhythmia depends on rate, site of origin, and duration of the arrhythmia, as well as the presence of underlying cardiac or systemic diseases that may adversely affect the patient. Consequences of an arrhythmia may be clinically undetectable, produce signs of inadequate cardiac output (eg, weakness, fainting, shock), or lead to complete collapse of the circulatory system and sudden death.

A systematic approach to interpreting ECGs will ensure an accurate diagnosis. The initial steps should include evaluating paper speed and sensitivity followed by labeling the individual waveforms recorded on the ECG. Afterward, the following questions should be addressed:

This is the first installment of a two-part series outlining ECG interpretation. Part 2 will address bradyarrhythmias and tachyarrhythmias.

Are P waves associated with QRS complexes?
Normally there is a fixed or nearly fixed physiologic PR interval between the P waves and QRS complexes, but in some instances there appear to be P waves that contribute to generating ventricular depolarization while they are instead merely fortuitous and QRS complexes are unrelated to the preceding atrial activity.

If the electrical impulse originates from the ventricular myocardium, the QRS complex will be wide and bizarre (ie, ventricular) because it does not utilize the normal His-Purkinje system.

A paroxysmal rhythm disturbance is usually characterized by a sudden outburst of arrhythmia that may last for as short as 3 to 4 beats or as long as minutes to hours.

Sinus rhythm & Cardiac arrhythmia
Sinus rhythm represents the normal sequence of cardiac electrical activity. Pacemaker cells within the sinoatrial node display automaticity and serve as the origin for the normal cardiac impulse. The P wave is recorded on the ECG as the wave of electrical activity depolarizes the atrial myocardium. The electrical impulse then traverses the AV node and His-Purkinje system, recorded as the PR interval, followed by depolarization of the ventricular myocardium producing the QRS complex. The T wave is recorded during ventricular repolarization (Figure 1). The average heart rate (ie, ventricular heart rate) can be determined on an ECG strip recorded at 50 mm/sec by counting the number of QRS complexes in 15 large boxes (75 mm) and multiplying by 40.

Sinus Arrhythmia
Sinus arrhythmia (Figure 3) is a phasic variation in heart rate in which R-R intervals often vary by >10%. There continues to be a P wave for every QRS complex and a QRS complex for every P wave, although on occasion the P wave morphology will vary or be difficult to visualize because of a phenomenon called wandering pacemaker (Figure 3B).

Accelerated Idioventricular Rhythm
Also known as slow ventricular tachycardia (Figure 4), this is a unique form of ventricular tachycardia typified by slow heart rates (dogs, 70–150 bpm). The rate of the accelerated idioventricular rhythm is usually within 10 to 15 beats of the normal sinus rate, and control of the heart rhythm alternates between the two sites. Because the rate of the idioventricular focus is slow, there is little hemodynamic consequence and patients generally remain asymptomatic. These rhythms are commonly seen with noncardiac disease and also in dogs with traumatic myocarditis and neurologic disease. Specific treatment of an accelerated idioventricular rhythm is rarely indicated and should be directed toward underlying causes.

Supraventricular Premature Complexes
Underlying sinus rhythm with SV premature complexes will have QRS complexes that occur early (<1 R-R interval from the preceding sinus beat), maintain an SV morphology, and either lack P waves (junctional) or have P waves with aberrant morphology (atrial). SV premature complexes can be difficult to distinguish from sinus arrhythmia with a wandering pacemaker, although the former usually occurs at an instantaneous rate suggestive of tachycardia. The instantaneous rate is determined by counting the number of millimeters between 2 successive QRS complexes, and if recorded at 50 mm/sec, dividing that number into 3000.