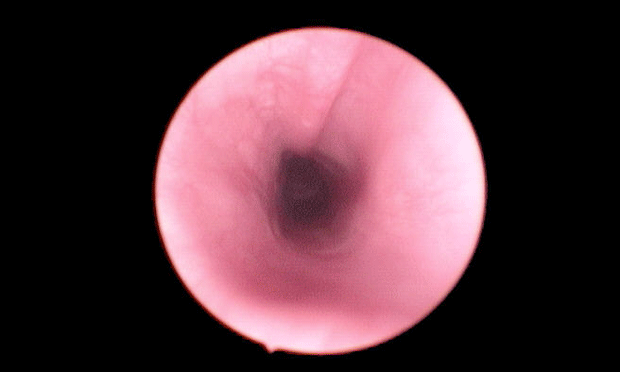 History. The dog experienced episodes of severe inspira­tory dyspnea with cyanosis and collapse when excited and exercising outside. Treatment with trimethoprim sulfa, antihistamines, and corticosteroids had not improved the condition. Additionally, she had never been heard barking and no coughing had been noticed.

Physical Examination. The dog was bright, alert, and active. She weighed 30 pounds and had no noticeable abnormalities. Palpation was normal. Auscultation revealed increased tracheal noise near the thoracic inlet. Jogging on a leash did not provoke clinical signs of fatigue, dyspnea, or abnormal respiratory noise.

Diagnostic Plan. Cervical and thoracic radiographs showed narrowing of the trachea at the thoracic inlet with normal heart and lungs (Figure 1). Complete blood count, serum chemistry, and urinalysis values were within normal limits. Endoscopic examination of the airways revealed inflamed, thickened mucosa with segmental narrowing of the tracheal lumen (25% to 30%) in the caudal cervical region (Figure 2). The tracheal lumen proximal and distal to the narrowed area were normal (Figure 3). Laryngeal conformation and function appeared normal.

Diagnosis: Tracheal stenosis due to malformation

Tracheal stenosis, a narrowing of the trachea, causes tracheal obstruction, which interferes with airflow to and from the lungs. Severe restriction of airflow leads to abnormal respiratory noises, exercise intolerance, and respiratory distress. Exercise, excitement, stress, and hot, humid conditions can precipitate or cause acute progression of clinical signs, leading to severe respiratory distress. Excessive airflow or turbulence through the stenotic area causes inflammation and swelling of the tracheal lining that further narrows the tracheal lumen, making breathing progressively more difficult. Tracheal stenosis (> 20%) interferes with the mucociliary apparatus and may lead to mucostasis and subsequent infection. In nonworking animals or those limited to moderate activity, clinical signs of exercise intolerance and dyspnea occur when stenosis approaches 50%.

Types of Disease. Tracheal stenosis may be congenital or acquired. Congenital cases have generalized or segmental narrowing of the tracheal lumen due to abnormally small, abnormally shaped, or malpositioned tracheal cartilages. Overlapping or touching of the cartilage ends dorsally with an apparent absence or folding in of the tracheal muscle is referred to as tracheal hypoplasia or hypoplastic trachea. This form of congenital tracheal stenosis is most commonly seen in brachycephalic breeds, especially the English bulldog. Segmental congenital tracheal stenosis is caused by malformed or malpositioned tracheal cartilages. It is rare and a breed predisposition has not been recognized.

Acquired tracheal stenosis occurs following tracheal trauma or surgery when excessive scar tissue forms at the site of injury. Excessive scar tissue forms when there is a gap between the edges of the tracheal mucosa that fills with granulation tissue during second intention healing. Excessive tension at an anastomotic or healing site promotes gap formation and increased stenosis. Cervical bite wounds, blunt trauma, and endotracheal intubation are sources of tracheal trauma that may lead to stenosis.

Diagnosis. Diagnosis of tracheal stenosis is based on consistent clinical, radiographic, and tracheoscopic findings. Radiographs of the neck are expected to show a narrowed tracheal lumen at the site of stenosis and the extent (length) of stenosis. This may be difficult to see on ventrodorsal views but is usually apparent on lateral views. Fluoroscopy is helpful in determining whether this narrowing is due to a static obstruction such as stenosis or a dynamic obstruction such as collapse. This information, in addition to the degree of the stenosis (percent of lumen compromise) and condition of the mucosa, is obtained during the tracheoscopy. The procedure allows assessment of tracheal lumen conformation, wall rigidity, and mucus.

Segmental stenosis is recognized as a focal narrowing of the lumen diameter that is minimally affected by inspiration or expiration. Scar tissue may be fleshy or fibrous, rimmed by a band of white tissue that involves part of or the entire tracheal circumference. Mucosal thickening, inflammation, and edema often obscure underlying cartilages. Based on the radiographic and tracheoscopic findings, the length of stenosis is estimated to determine if resection of the involved tracheal segment is feasible. In this case, definitive diagnosis required exploration of the neck with resection and anastomosis of the trachea. Although tracheal narrowing can be identified on radiographs or during tracheoscopy, histopathologic evaluation of tissue from the obstructed site is necessary for definitive diagnosis.

Treatment. The abnormal segment of trachea had deformed cartilages that were wider than normal with an abnormal contour. No evidence of trauma was detected. Eight tracheal cartilages were removed and anastomosis achieved using the split cartilage technique. The tracheal lumen was narrowed by cartilage deformity (Figure 4) and mucosal inflammation and thickening. Histological evaluation ruled out neoplasia and confirmed granulomatous tracheitis. The condition was thought to be congenital due to the age of the dog and no history of neck trauma.

Recovery. Following surgery, there was no evidence of respiratory distress and only mild occasional coughing. Neck motion and physical activity were restricted for two weeks. An evaluation three months following surgery found that no further episodes of dyspnea or exercise intolerance had occurred. Two weeks prior to the evaluation, the dog barked for the first time. Tracheoscopy identified a normal appearing anastomotic site with slight incongruity and a thin line of scar tissue. In addition, tracheal hypoplasia with slight overlapping of cartilage edges was evident (Figure 5). This had not been recognized on initial evaluation due to mucosal inflammation.

Differential Diagnoses. Clinical signs of tracheal hypoplasia are treated symptomatically using antibiotics with expectorants or cough suppressants to treat secondary infections and clear accumulated mucus. Concurrent upper airway abnormalities such as elongated soft palate, stenotic nares, and laryngeal collapse are treated surgically. Treatment of segmental tracheal stenosis is balloon dilation or resection and anastomosis. Balloon dilation is usually performed multiple times within a period of several days and corticosteroids are administered in an attempt to prevent recurrence. Depending on the degree of tracheal elasticity and tension, approximately 20% to 60% of the trachea may be resected and end-to-end anastomosis achieved. The split cartilage technique is preferred because it is relatively easy to perform and results in a more precise anatomic alignment with less luminal stenosis than many other techniques. Diseased trachea exceeding the limits of resection and anastomosis may be managed with permanent tracheostomy, intraluminal silicone tubes, grafts, or prostheses with variable success.

Follow-up. Prognosis following resection and anastomosis of a stenotic tracheal segment is good if tension is minimized. Restricting extension of the neck is important during the first two weeks after surgery. Head and neck movements are restricted by placing a chin-to-sternum suture or attaching a muzzle to a harness to keep the neck in a flexed position. Limiting exercise and excitement are also recommended. Reevaluation by tracheoscopy should be performed 8 to 12 weeks following surgery to assess anastomotic healing and potential recurrence of stenosis. Stenosis following anastomosis or trauma may respond to dilation but recurrence is often a problem. Laryngeal paralysis could be a complication of tracheal resection due to damage (either surgical or from postoperative inflammation) to recurrent laryngeal nerves.

DID YOU ANSWER ...
• Tracheal collapse, hypoplasia, stenosis from malformation or scarring, granuloma, neoplasia, or trauma
• Yes, definitive diagnosis requires exploration of the neck with resection and anastomosis of the trachea. Although tracheal narrowing can be identified on radiographs or during tracheoscopy, histopathologic evaluation of tissue from the obstructed site is necessary.
• Tracheal stenosis due to malformation
• Treatment of segmental tracheal stenosis includes balloon dilation or resection and anastomosis.