Anne M. Barger, DVM, MS, DACVP, is a clinical associate professor in the veterinary diagnostic laboratory and section head of the clinical pathology laboratory at University of Illinois. Her research interest is cytology, particularly immunocytochemistry and osteosarcoma. Dr. Barger is an active lecturer on the topic of cytology; she received her DVM and MS from University of Illinois.

Hemophagocytic syndrome—referred to in humans as hemophagocytic lymphohistiocytosis—is a rare disease that can be familial or acquired.3 This syndrome is the result of overreactive T cells, macrophages, and other histiocytic cells and can result in peripheral cytopenias. In humans, it has been reported to accompany various infectious organisms, including viruses, Toxoplasma gondii, and Cryptococcus spp4; in such cases, patients are frequently immunosuppressed.4

In the present case series report, the authors describe 32 cats infected with Histoplasma spp-like organisms that had accompanying hemophagia noted on cytology. Many of these cats also had concurrent cytopenias, which may or may not have been the result of hemophagocytosis. This is an important sequela to consider if a patient has cytopenia associated with an infectious disease that does not correct when the infection is appropriately treated. Erythrophagia has been reported previously in cats with neoplasia and immune-mediated disease but has not commonly been reported to be associated with an infectious organism. In the single case report of feline hemophagocytic syndrome identified in the literature, the cat was FIV positive.2 These results suggest that fungal infection may be another important differential if hemophagia is noted on cytology or histopathology. 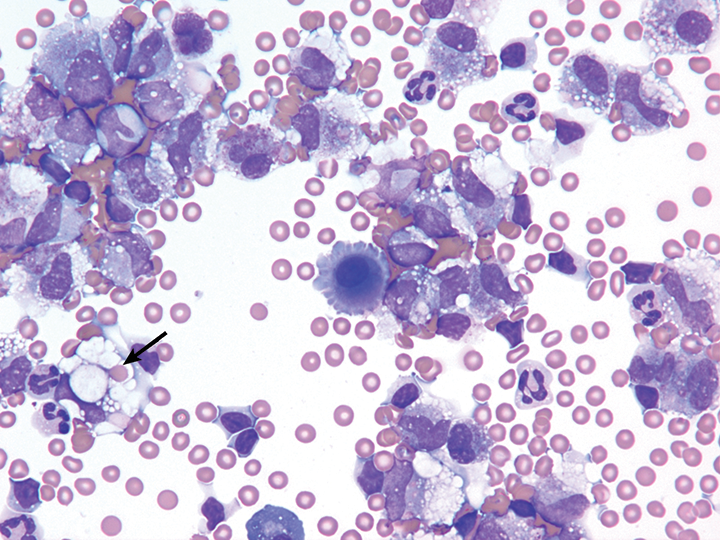 FIGURE Cytospin preparation of a hemorrhagic effusion from a dog. Erythrophagia (one represented by the arrow) can be noted in several macrophages.

Hemophagia is a nonspecific pathologic finding associated with inflammation or hemorrhage or may be indicative of underlying immune-mediated, infectious, or neoplastic disease.

Systemic fungal disease should be considered as a differential when hemophagia is noted on a feline cytologic sample.