Learn how to manage and treat these challenging EPI cases.

►EPI is due to pancreatic acinar atrophy (PAA) in approximately 50% of cases (based on epidemiological data from the GI Laboratory at Texas A&M University; unpublished data, 2009).
►To date, PAA has only been described in German shepherds, rough-coated collies, and Eurasians.
►Although several studies have suggested an autosomal-recessive trait for PAA in German shepherds, a recent study has definitively shown that this condition is not caused by a simple autosomal-recessive trait.2

►The true incidence and prevalence remain unknown.
►Approximately 42% of all affected dogs are German shepherds (based on epidemiologic data from the GI Laboratory at Texas A&M University; unpublished data, 2009).

►EPI can be seen in any canine breed, but German shepherds, rough-coated collies, and Eurasians have a familial predisposition.

►Dogs with EPI attributable to PAA are typically young adults (1–2 years of age). Dogs with EPI due to chronic pancreatitis are often middle-aged to older but can be of any age.
►German shepherds are younger at the time of diagnosis than dogs of other breeds.

►No sex predilection has been reported.

Clinical signs develop after approximately 90% of the secretory capacity of the exocrine pancreas has been lost.

►This species-specific test is used to quantify trypsinogen and trypsin in serum.
►A cTLI concentration < 2.5 mcg/L after withholding food for > 8 hours is considered confirmatory.4
►A serum cTLI concentration between 2.5 and 5.7 mcg/L may be associated with occult EPI. Serum cTLI should be retested in 1 to 2 months.
►Decreased cTLI concentration is highly sensitive and specific for EPI and is not affected by enzyme supplementation.

Dog with EPI: Note that the dog is severely emaciated, suggesting either a systemic catabolic disease or a disease associated with maldigestion, malabsorption, or both (A). A fecal sample obtained from this dog is typical for an animal with severe maldigestion or malabsorption. The dog also had a serum cTLI concentration of 0.4 mcg/L, which is considered diagnostic for EPI. Note that the stools are voluminous and soft (B). Stools from these dogs can also be light in color and sometimes contain undigested food particles. (Courtesy of Dr. Erin Allgood, Case Veterinary Hospital, Savannah, Georgia) 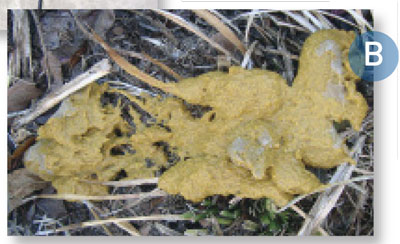 Treatment of choice includes providing digestive enzymes with each meal.

►Treatment of choice includes providing digestive enzymes with each meal.6
►Powdered pancreatic enzyme supplements of porcine or bovine origin are mixed with the diet (initially 1 tsp/10 kg body weight with each meal mixed into the food immediately before feeding). After a complete response, this dose can usually be significantly decreased.
►Tablets, capsules, and enteric-coated preparations are less effective in dogs.
►Preincubation of the diet with the enzyme supplement or addition of antacids or bile acids is not necessary.
►Enzyme activity may vary with the product used and also within containers.
►A strong body odor has been anecdotally reported in some dogs treated with replacement enzymes.
►Some dogs may develop oral bleeding, which often resolves after the dose of enzymes is lowered.7

►Cobalamin must be administered parenterally (usually given by subcutaneous injection).
►Pure cyanocobalamin should be used.

•  Dose is 250 to 1200 mcg per injection, depending on the size of the dog.
•  Initially given once a week for 6 weeks, then 1 more dose 30 days later; serum cobalamin concentration is rechecked 30 days after that.
•  Some dogs need only short-term cobalamin supplementation; others require lifelong supplementation. 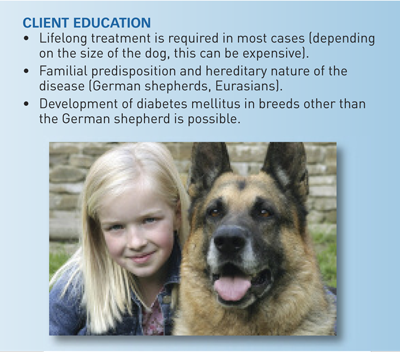 About 20% of dogs do not respond to initial enzyme replacement therapy.

•  Can be kept frozen for months without losing enzyme activity.
•  Should be supplemented at approximately 30 g per 10 kg body weight.
•  May overcome food aversion and food allergies due to enzyme supplementation.
•  Risk for transmission of Echinococcus multilocularis from game pancreas. There is a theoretical risk for transmission of bovine spongiform encephalopathy or Aujeszky’s disease. However, this risk is not any higher than with use of powdered products.

►Consider for patients that do not respond to enzyme replacement therapy and cobalamin supplementation alone.
►Can be used to treat small intestinal dysbiosis (however, this condition usually resolves without antimicrobial therapy).
►Tylosin (25 mg/kg PO Q 12 H) for 6 weeks is preferred.

►Coatings of enteric-coated preparations can lead to unpredictable dissolution and may lead to treatment failure.
►Some pancreatic enzyme supplements do not contain sufficient amounts of lipase. For comparison, products should contain approximately 70,000 U.S. Pharmacopeia units of lipase activity per teaspoon of product.