Examination of the Ocular Fundus. Part 2: Indirect and Direct Ophthalmoscopy

Part 1 of this article, which appeared in the June 2008 issue of Clinician's Brief, described the normal appearance of the ocular fundus and discussed the first 2 steps in examination-pupillary light reflexes and the menace/dazzle responses.

The posterior segment of the ocular fundus (the internal structures of the eye behind the lens) is examined using indirect ophthalmoscopy followed by direct ophthalmoscopy. These 2 methods are complementary rather than exclusive, because the limitations of one are the advantages of the other.

Ophthalmoscopy identifies changes in the eye's normal appearance, detachment of the retina, chorioretinal hypoplasia or dysplasia, vascular patterns, attenuation, congestion, hemorrhage, colobomas, scars, alteration in coloration, changes in pigmentation, and foci of inflammation. The optic disc should be examined for the presence of masses, pits, or colobomas; its size, shape, and color should also be evaluated. Swelling and inflamma­tion of the optic disc occurs with optic neuritis and glaucoma. Excessive myelination of the disc is a normal variation and must be different­iated from swelling of the disc.

Indirect Ophthalmoscopy
Indirect ophthalmoscopy, the technique favored by ophthalmologists, is an efficient technique for screening the ocular fundus for lesions. A biconvex condensing lens is positioned between the patient's eye and light source, producing a low magnification, stereoptic virtual image that is reversed and inverted. Mydriasis and darkness are essential for detailed examination.

The indirect technique allows greater distance between the face of the clinician and the patient's face compared to direct ophthalmoscopy and provides some protection to the clinician in intractable patients. The main disadvantages with indirect ophthalmoscopy are the low magnification available for studying particular areas and the amount of practice necessary to learn this technique.

Direct Ophthalmoscopy
Direct ophthalmoscopy is used more frequently by general practitioners than indirect ophthalmoscopy; however, both techniques have advantages that complement each other. The method is termed "direct" because a condensing lens is not positioned between the ophthalmoscope and the patient's eye, and the examiner has a direct optical image. The fundus image is magnified, real, and upright.

Direct ophthalmoscopy has certain limitations. Penetra­tion of cloudy or partially crystallized media is limited. Because of magnification, there is a small field of view. Examination of the peripheral fundus is difficult. There may be difficulty in compensating for refractive errors and eye movements. Stereopsis is absent and depth of focus is limited. In addition, the small working distance between ex­aminer's face and patient may be hazardous to the clinician.

Procedure Pearl
The Panoptic ophthalmoscope (Welch Allyn, www.welchallyn.com) provides an intermediate level of magnification to the direct and indirect techniques.

Once the pupillary light response has been evaluated (discussed in Part 1), a mydriatic should be applied to the eye.

In a normal dog or cat eye, 1% tropicamide (Mydriacyl; Alcon Laboratories, www.alcom.com) provides maximum mydriasis within 30 to 45 minutes. The duration of mydriasis from 1% tropicamide is 8 to 12 hours in small animals. Young puppies dilate slowly, often incom­pletely, and may require multiple drops. An additional mydriatic, 2.5% phenyl­ephrine (Mydfrin; Alcon Laboratories, www.alcom.com), may be used along with tropicamide in eyes that do not dilate well.

Drug-induced mydriasis should not be used indiscriminately. The instillation of mydriatics is avoided in animals with predisposition to or overt glaucoma, keratoconjunctivitis sicca, and lens luxation. Mydriasis produced by darkening the room may permit a cursory but not complete examination of the ocular fundus.

The light is directed into the patient's eye so that the tapetal reflection is obtained and the lens is moved to and fro until a sharp image is produced. The observer-patient distance is approximately an arm's length, or 50 to 75 centimeters.

inocular indirect ophthalmoscopes have an integral light source and a prism system for delivery of separate images to the observer's eyes. They are mounted on a headpiece or spectacle-type frame. The working principle is the same as for monocular indirect ophthalmoscopy, but the instruments have the benefits of stereopsis and more powerful light sources. They also allow the observer a free hand.

The indirect ophthalmoscope is adjusted so the light is slightly off center of the observer's visual field (to reduce glare). The patient's muzzle is held gently and the condensing lens is positioned 3 to 5 centimeters from the cornea with the upper eyelid retracted. The lens is usually initially held close to the cornea to permit ob­serva­tion of the ocular fundus, then it is moved away from the eye until the lens image is maximum size. When the hand lens is interposed between the light source and the eye, the fundus is visualized.

Direct Ophthalmoscopy
The direct ophthalmoscope head offers a range of lenses to enable focusing at various depths within the eye. These lenses are cali­brated in diopters and are color-coded. The more positive (green) the diopter setting, the more converging power the lens possesses. Negative diopters (red) denote diverging lenses. Minor lens corrections are usually needed to focus on the patient's fundus. Within the eye, a distance of 3 diopters equals 1 mm.

When performing direct ophthalmoscopy, the patient's body and head are minimally restrained by an assistant. The observer holds the muzzle and/or lids with one hand and with the other hand holds the ophthalmoscope and makes the necessary diopter changes. The diopter setting is usually started at "0" (A) and adjusted to between +3 (green) to -3 (red) diopters to provide the sharpest image possible. Green-colored numbers (B) move the focus towards the clinician; red-colored numbers move the focus away from the clinician (C). 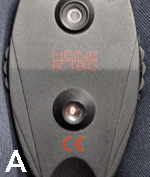 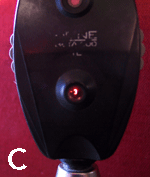 It is preferred to initially view the tapetal reflection several centimeters from the patient (D) and then slowly move closer to the patient's eye, allowing optimum focus to be achieved and the fundus to come into focus (E). Some veterinarians feel it is easier to use their right eye to examine the right eye of the patient and the left eye to examine the patient's left eye. In addition, some observers may need to remove their eyeglasses when performing direct ophthalmoscopy. A spectacle lens prescription can be set on the direct ophthalmoscope by trial and error and will compensate for any refractive error in the observer's vision during the examination.

Procedure Pearl: The instillation of mydriatics is avoided in animals with predisposition to or overt glaucoma,