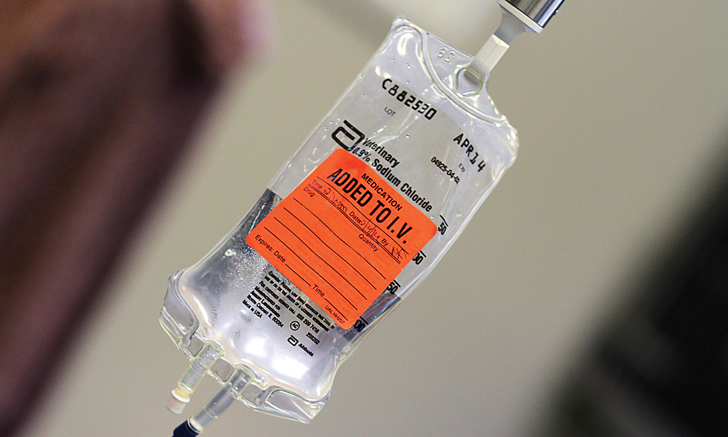 Disseminated intravascular coagulation (DIC) is a clinical syndrome that occurs as a complication of systemic disease and creates a hypercoagulable state, usually through crosstalk between inflammation and hemostasis.1 This activation of blood coagulation generates intravascular thrombin and fibrin, resulting in thrombosis of small-to-medium vessels, and can lead to multiorgan dysfunction syndrome if not appropriately controlled.2 Disseminated thrombus formation consumes platelets, clotting factors, and regulation factors (eg, antithrombin) and may progress to overt DIC.1 DIC can occur in several phases: a subclinical phase, an organ failure phase, and/or an overt (ie, bleeding) phase.

Thrombin, a product of hemostasis, exerts inflammatory mediation through the thrombin–thrombomodulin complex.3 Hemostasis is regulated by 3 antithrombotic systems, including antithrombin, which is most relevant to DIC pathogenesis. Antithrombin has important anticoagulant and anti-inflammatory effects, and its cofactor heparin makes it much more active.4 Although DIC can increase morbidity and mortality in affected patients, treating the underlying disease can generally control and reverse its physiologic consequences.

There are no specific historical findings for DIC. In the overt phase, bleeding can be present, but subclinical DIC is also common. In cases of subclinical DIC, any history and clinical signs will be due to the primary disease that is causing DIC (eg, sepsis, immune-mediated hemolytic anemia, trauma, heat stroke; Table 1).5 Because of the association between inflammation and risk for development of DIC, clinicians should look for signs of systemic inflammatory response syndrome or sepsis, including tachycardia, tachypnea, increase in temperature, and signs of severe tissue trauma.

The DIC continuum is initiated by a prothrombotic, hypercoagulable condition. Clinical signs vary based on the phase. Affected patients may have no overt signs of DIC (eg, bleeding, petechiae), have signs of organ dysfunction due to microthrombi, or may progress to a hypocoagulable bleeding phase,1,2 as clotting factors are consumed by the generalized activation of hemostasis that is central to the syndrome. Although DIC can be chronic and progress over several days, it can also be self-limiting and self-resolving and never progress to a bleeding phase.

Diagnosis of DIC can be challenging. DIC is a dynamic state of hemostasis imbalance that can result in concurrent hyper- and hypocoagulable states, depending on the organs affected. Scoring systems to determine the phase of DIC can be useful due to the absence of pathognomonic signs or laboratory abnormalities. Scoring systems also allow for a more objective characterization of the syndrome and can help identify patients with subclinical DIC, particularly for clinicians not expert in the disease; the more overt the signs of DIC are, the clearer the diagnosis. Several scoring systems have been developed and tested in both human and veterinary medicine.1,2,6-9

The Wiinberg scoring system is a mathematical model that considers expert evaluations to be the gold standard. If a predisposing disease is present, clinicians can use this scoring system, which includes fibrinogen levels, D-dimer levels, prothrombin time (PT), and activated partial thromboplastin time (aPTT). In a study, the scoring system had a positive predictive value of 80% and a negative predictive value of 81%, therefore missing 20% of patients that experts believed had DIC.9 Thrombocytopenia or hypercoagulable thromboelastographic tracing can also be present in patients with DIC.10

The ability of various scoring systems to predict mortality has also been investigated. A study has compared several scoring systems, including a modification of the International Society on Thrombosis and Haemostasis human DIC scoring system (Table 2), the Wiinberg scoring system, and results of individual hemostasis assays.1

*The human scoring system is presented as suggested by the International Society of Thrombosis and Haemostasis.6 Scores range from 0 to 8. A score ≥5 is compatible with overt DIC.

A 78% accuracy for mortality was identified when 3 of 6 individual hemostasis assays (ie, PT, aPTT, fibrinogen, antithrombin, D-dimer, platelet count) were outside the reference range; this was found to be a superior predictor of mortality as compared with previously reported scoring systems.1 Due to the limited availability of some diagnostic tests (eg, D-dimer) in practice, DIC may often be diagnosed based on the presence of a compatible primary disease (Table 1) and changes in classic hemostatic tests (Table 3).

Treatment of DIC can be complex and controversial. The only therapeutic approach recognized to be of benefit is treatment of the primary disease process (eg, administration of antibiotics and source control in septic patients).2,8 When the underlying disorder is properly managed, DIC may resolve spontaneously prior to development of overt clinical bleeding, although some cases may require supportive treatment aimed at the coagulation system (Table 3).2

Plasma therapy is recommended to correct active hemorrhage and/or for perioperative stabilization. Several guidelines and consensus statements in humans recommend administration of platelet concentrate and fresh frozen plasma (FFP) in DIC patients with active bleeding and in patients at high risk for bleeding that would require further invasive procedures.2 FFP should not be used to correct abnormal coagulation parameters or increase antithrombin levels, as FFP contains only minimal antithrombin; however, FFP can replace other coagulation proteins that were consumed in the DIC process and may help control clinical signs of bleeding. An initial FFP dose of 15 mL/kg is recommended, although higher doses may be required.2

Although use of unfractionated heparin in the treatment of DIC is controversial in human medicine, most of the aforementioned guidelines recommend unfractionated heparin or low-molecular-weight heparin (LMWH) to treat subclinical DIC. Experimental studies have shown that heparin can partially inhibit the activation of coagulation in DIC,11 but its impact on mortality or other clinically relevant outcomes in humans and veterinary patients is unknown. A low unfractionated heparin dose of 7-10 units/kg/hr has been shown to be safe in humans with sepsis-associated DIC,12,13 but these doses are much lower than the dose commonly recommended in veterinary medicine for thromboprophylaxis (150-300 units/kg SC q6-8h).14 LMWH can be used at doses of 0.8-1 mg/kg SC q6-8h for enoxaparin or 150 units/kg SC q8h for dalteparin.14 The impact of heparin therapy on the inhibition of the coagulation system in veterinary medicine is unclear, with conflicting results available in dogs.15,16

Prognosis depends on the phase of the syndrome. Specific mortality rates for nonbleeding patients with DIC are lacking, but a recent study showed a 60% mortality rate in dogs with DIC in the bleeding phase.1

Preventive measures may not be needed, as DIC can resolve spontaneously when the underlying disorder improves. However, the recommendation for nonbleeding humans with DIC is use of either unfractionated heparin or LMWH.2

In DIC patients with diseases that predispose to DIC (Table 1), inflammatory signs (eg, temperature, heart rate, respiratory rate, leukocytes, band neutrophils) should be monitored. If inflammatory signs are improving and the patient is clinically improving, progression of DIC is generally halted. Similarly, laboratory data pertinent to DIC diagnosis (eg, PT, aPTT, d-dimer levels, platelet count) should be regularly (eg, daily) monitored. Because DIC is a dynamic process, changes can occur rapidly and clinical decisions may change if the syndrome progresses.