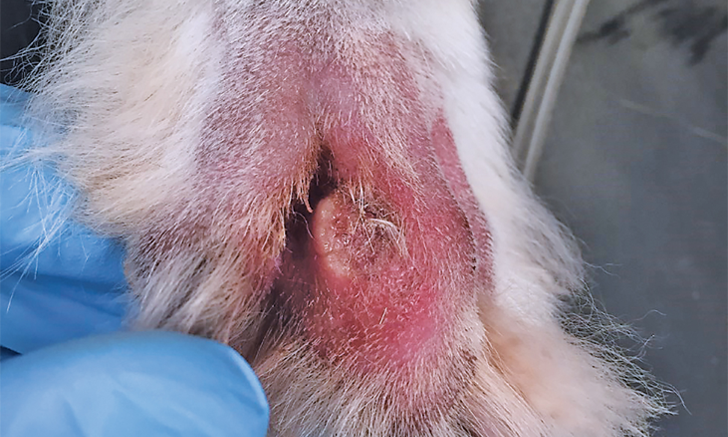 Molly, a 2-year-old, 40-lb (18-kg) spayed springer spaniel living in the United Kingdom, was presented for a 4-day history of progressive, multifocal, ulcerative skin lesions and a 24-hour history of lethargy, anorexia, and vomiting. The skin lesions initially affected only the right pelvic limb; however, the day before presentation, additional ulcers developed over both inguinal areas, the lips, and the nasal planum. Molly was up-to-date on vaccinations and received monthly imidacloprid and moxidectin topical parasite prevention.

Mucous membranes were slightly dry, and clinical dehydration was assessed at approximately 6%. Examination showed interdigital ulceration and soft tissue swelling of digits IV and V on the right pelvic limb (Figure 1), superficial erosion of the skin in the inguinal area, and multiple erosions and ulcers over the rostral aspect of the upper and lower lips and nasal planum (Figure 2). No other abnormalities were noted. 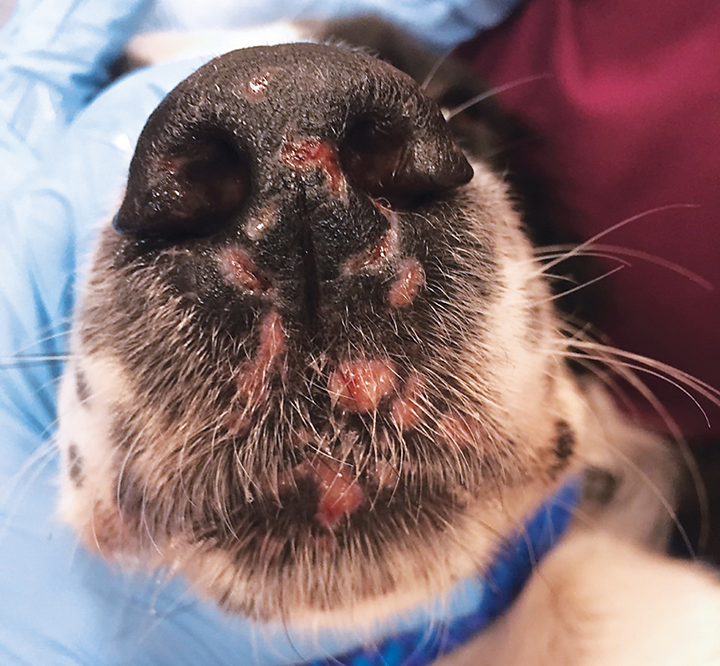 Figure 2 Multiple erosions and ulcers are present over the rostral aspect of the patient’s upper and lower lips and nasal planum.

Figure 2 Multiple erosions and ulcers are present over the rostral aspect of the patient’s upper and lower lips and nasal planum.

Urine specific gravity was 1.025; urinalysis was otherwise unremarkable. Urine protein:creatinine ratio was elevated at 2.5 (normal, <0.4). Urine culture was negative. A urinary catheter was placed to monitor urinary output and adjust fluid therapy accordingly as part of standard management of AKI.

No significant findings were identified on abdominal ultrasonography or radiography of the thorax, abdomen, and limbs. Skin biopsy samples were not obtained because of concerns regarding the effects of sedation on renal perfusion.

Eighteen hours after admission, serum chemistry profile showed worsening azotemia with a creatinine concentration of 7.7 mg/dL (681 µmol/L) (IRIS Grade IV oligoanuric AKI). The patient was obtunded. Several options were discussed with the owner, including use of mannitol and/or fenoldopam to promote diuresis, referral for therapeutic plasma exchange and/or continuous renal replacement therapy, and euthanasia. Therapeutic plasma exchange has been used in humans with conditions similar to CRGV.2,3 After consideration, Molly was euthanized. Postmortem examination disclosed renal and cutaneous lesions consistent with thrombotic microangiopathy, including fibrinoid necrosis of the glomerular arterioles with frequent vessels occluded by thrombi and concurrent evidence of tubular necrosis and cutaneous coagulative necrosis with rare intravascular thrombi. The presence of these lesions with Molly’s clinical signs and progression confirmed CRGV.4

Until 2012, few (<5) cases had been reported in Europe. Since then, more than 150 cases in the United Kingdom, including one in Northern Ireland, have been confirmed by postmortem examination in nongreyhound breeds; 30 of these cases were reported in 2018, making CRGV a rare condition. Although a definitive cause has not yet been identified, research investigating environmental and genetic causes (mainly complement system dysfunction) is ongoing.

Ulcerated, vasculitis-like skin lesions of the extremities, ventrum, face, and tongue are typically reported first.4 Some dogs develop skin lesions and azotemia; others develop skin lesions only and do not become azotemic, although the percentage of dogs that develop skin lesions only is unknown due to the lack of gold standard testing antemortem and the lack of specificity of the skin lesions. The average time from onset of skin lesions to development of azotemia is 3 days (range, 1-10 days).4 Once AKI is present, prognosis is poor, with a mortality rate of 85%.5 Dogs that do not develop azotemia have an excellent prognosis, provided that wounds are adequately managed with standard local care and systemic antibiotic therapy. Thus far, there have been no reports of CRGV recurrence in a dog that survived the disease or of CRGV transmission between dogs. CRGV does not appear to be zoonotic, although standard precautions should be followed (eg, wearing gloves and a protective apron) until more is known about the disease etiology.