Cutaneous Melanoma in a Dachshund

Heather Wilson-Robles, DVM, DACVIM (Oncology), is an assistant professor at Texas A&M University. She earned her DVM from University of Tennessee and completed a small animal rotating internship at the University of Minnesota Veterinary Medical Center and a residency in medical oncology at University of Wisconsin–Madison. She received the E. Gregory MacEwen award for Outstanding Basic Science Research in oncology from the Veterinary Cancer Society in 2006. Her research interests include tumor initiating cells, osteosarcoma, and clinical trials. 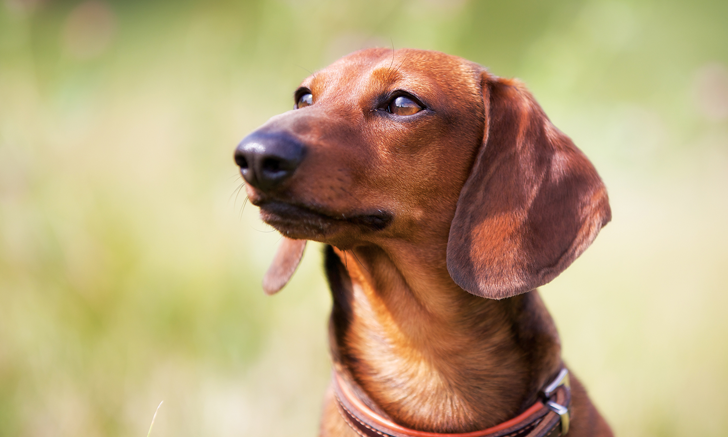 We sat down with Dr. Wilson-Robles to further discuss cutaneous melanoma. Listen to her episode of Clinician's Brief: The Podcast here.

Buster, a 7-year-old neutered male dachshund, was presented for evaluation of a pigmented, nonhaired growth <1 cm in diameter of a month’s duration near his left eye. Although the mass was not painful, it was superficially ulcerated and Buster scratched at it often. The mass was incompletely excised from near the left medial canthus and submitted for histopathologic evaluation. Excision was incomplete to avoid disrupting the eyelid margin.

Buster was diagnosed with cutaneous melanoma based on histopathologic evaluation of the excised mass, which was determined to be malignant based on its mitotic index (MI) of 10, as cutaneous melanoma with an MI >3 is considered to be malignant.1-3 According to the biopsy report, the tumor tissue was composed of sheets of pigmented and nonpigmented atypical mesenchymal cells arranged in storiform patterns in the dermis. Nuclei were round-to-oval, with few distinct prominent nucleoli. Many tumor cells contained melanin granules. Radiation therapy (RT) for the incompletely excised melanoma was initially recommended; however, because of concern for damage to the eyes from external beam radiation due to the close proximity of the tumor to the eye, Buster was referred to a local university hospital for strontium 90 RT.

Adjunctive plesiotherapy with strontium 90 uses β-particle emissions to deliver radiation directly to the skin. Unlike gamma-particle RT, which is used with external beam RT, β-particle RT provides the required surface dose of radiation but has a rapid decrease of the dose beneath the surface of the skin, as β particles only penetrate a few millimeters into the skin, making β-particle RT appropriate only in cases of very superficial inflammatory or neoplastic lesions. Only minimal shielding is required with β-particle RT due to the inability of β particles to penetrate even thin layers of steel; this allows for precise treatment with high doses of radiation to small and superficial lesions.

On presentation for strontium 90 RT, Buster was bright, alert, and responsive. No significant abnormalities were identified, with the exception of moderate dental tartar and a small scar on the medial canthus of the left eye where the primary tumor had been removed.

There was no obvious mass at the site of the primary tumor. Regional lymph nodes were palpated and were normal. Lung sounds were also normal. Staging was performed and included aspiration of the regional submandibular lymph nodes and 3-view thoracic radiography, which was normal. Buster was determined to have stage I cutaneous melanoma. Advanced imaging (ie, CT) to include the retropharyngeal and periorbital lymph nodes was declined by the owner. Minimum database (ie, CBC, serum chemistry profile, urinalysis) was also normal.

Although melanoma was easily diagnosed via histopathology in Buster’s case, histopathology may not be enough to confirm a diagnosis of melanoma. In such cases, immunohistochemical stains may be necessary to make a definitive diagnosis.1

Buster was premedicated for strontium 90 treatment with butorphanol (0.2 mg/kg IM), induced with propofol to effect, and intubated. Anesthesia was maintained using 1.5% to 2% isoflurane inhalant. A 1.8-cm strontium 90 probe was placed over the scarred area and maintained for 6 minutes and 53 seconds to deliver a total dose of 100 Gy to the surface of the skin.

At the recheck examination 2 weeks after RT, a white scab over the treated area, mild blanching of the skin, and mild moist desquamation were observed, all of which resolved after an additional week of supportive care.

Adjuvant therapy, including carboplatin chemotherapy and the melanoma vaccine, was recommended to address potential metastatic disease but was declined. Continued monitoring for evidence of local recurrence and metastatic disease with physical examinations, regional lymph node evaluations, and thoracic radiography for the next 3 years was also suggested but declined (see Treatment at a Glance).

Most cases of cutaneous melanoma diagnosed on haired skin are benign; however, cutaneous melanoma associated with a mucocutaneous junction, a nail bed, or the oral cavity is often malignant and has aggressive clinical behavior. Melanomas arising from haired skin can occasionally be malignant with an aggressive clinical course (≈12% of melanomas from haired skin)4; thus, all pigmented or partially pigmented skin masses that are removed should be submitted for histopathologic evaluation to determine the surgical margins, MI, and any additional features of malignancy.

The prognosis for stage I cutaneous melanoma can be quite good if the MI is <3 but guarded if the MI is higher. The metastatic rate for malignant mucosal melanoma, which spreads most commonly to the lungs and regional lymph nodes, is approximately 60% (see Take-Home Messages).3,7,8

An update provided by the owner indicated that Buster was doing well 56 months postdiagnosis, with no evidence of metastasis or spread of the original tumor, despite the high MI. No additional therapy was performed during this 56-month period.