Color Change in a Bearded Dragon 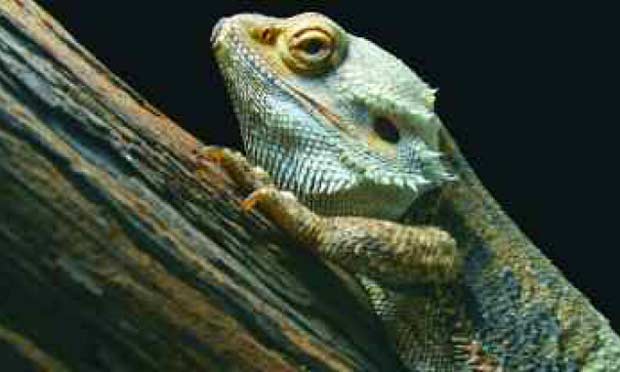 History. You were paged at home, after hours. The caller forgot to stop and purchase crickets for her bearded dragon. Her 5-year-old son, upset that his pet might be hungry, caught some fireflies. The client found a Web site that advised feeding wild caught insects, as long as a calcium supplement was dusted on the insects. The lizard readily ate three fireflies about half an hour ago. Her son said good night to the pet, and noticed that the lizard seemed to be changing color-his back was black.

ASK YOURSELF ...
My response to the owner would be:
A. It's probably just the light; no worries, mate.
B. Fireflies are toxic to lizards. Get to the clinic ASAP!
C. Although wild insects can harbor parasites, ingesting fireflies shouldn't be a problem. Was a pesticide used during the day?
D. You have no idea, since you don't treat reptiles. Refer to a local DVM who
specializes in exotics.

Correct Answer: B
Fireflies are toxic to lizards. Get to the clinic ASAP!

As exotic pets increase in popularity, more pet owners are likely to supplement pets' diets with insects they catch at home. At this time, several different reptile and amphibian species have been reported to die after eating fireflies. Besides bearded dragons, White's tree frogs (Litoria caerulea), Caucasian ground lizards (Lacerta derjugini), and African chameleons (Chamaeleo africanus) have been affected by fireflies.

Bearded dragons come from an area of Australia where fireflies are not found. Native species of lizards, toads, and birds have developed a taste aversion to fireflies, thus protecting them from toxicity.

Toxicity. Fireflies (Photinus sp) contain steroidal pyrones known as lucibufagins. There are about 90 µg of lucibufagins in a firefly. These cardiac glycosides are structurally similar to bufadienolides of toads and cardenolides of plants like kalanchoes. Lucibufagins are cardiotoxic. Pharmacologic tests have found that lucibufagin doses at 0.06 mg/kg IV in dogs induced ventricular arrhythmia. In cats, bufalin (toad toxin) at doses of 0.14 mg/kg IV is a lethal dose in 50% of cases.

Clinical Signs. Clinical signs are consistent with cardiotoxicity and include head shaking, oral gaping, and dyspnea. Color changes from tan to black on the dorsal trunk, tail, and nape are reported in lizards. Some lizards have regurgitated. Sudden death with no reported signs is a frequent finding, since many owners feed the pets, and then do not check on them again for a number of hours. The onset of clinical signs has been as short as 15 minutes or prolonged by up to two hours. Deaths have occurred within an hour of firefly ingestion. Necropsy results are generally unremarkable, but insect remains should be found in the stomach contents.

Treatment. Treatment is theoretical, because no animal has survived long enough to reach a veterinarian. Prevention is the best cure. Educate clients not to feed wild caught insects. If a case of ingestion is detected and reported promptly, gastric lavage followed by activated charcoal would be recommended. Cardiac monitoring and appropriate treatment should be initiated. Body temperature should be monitored and maintained at an optimal level.

Differential Diagnosis. Other insects that sequester cardenolides include Monarch and queen butterflies (Donaus plexippus and gillipus) as well as lygaeid bugs (Oncoeltus fasciatus).

Treatment Endpoint and Prognosis. Animals should be treated until all clinical signs are resolved. The prognosis is grave for any symptomatic animal.

Case Presentation Follow-up. In this case, the bearded dragon expired as the client drove into the parking lot. On necropsy, parts of fireflies were seen in the stomach. The client's husband is an entomologist at a local university, and identified the insect parts as Photinus sp.