Orla Mahony, MVB, DACVIM & DECVIM, is clinical assistant professor in the department of small animal clinical sciences at Tufts University Cummings School of Veterinary Medicine, where she performed her residency in internal medicine. Endocrinology is her primary clinical interest. She received her veterinary degree from University College Dublin.

Lluís Ferrer, DVM, PhD, DECVD, is professor of veterinary dermatology at Tufts Cummings School of Veterinary Medicine. Dr. Ferrer’s research focuses on canine leishmaniasis, canine AD, canine demodicosis, and the use of stem cells as a therapy in veterinary dermatology. He earned his DVM and PhD at the University of Zaragoza (Spain).

A 6-year-old, 19-lb (8.6-kg), indoor-only neutered male domestic shorthair cat was presented for a second opinion after being diagnosed with diabetes mellitus 10 days prior. He had a one-year history of polyuria, polydipsia, and occasional periuria. He was fed a commercial dry and canned diet twice daily, and his appetite was reportedly normal. He had a 1-lb weight loss over the past 5 months. He was up to date on rabies and FVRCP vaccinations.

On examination, the patient was bright and alert. BCS was 7.5 of 9. Nonpruritic alopecia was present bilaterally over the flank and axillary regions. The hair coat was brownish-red (Figure 1), but the medical record indicated a solid black coat. Abdominal palpation elicited nonspecific pain with no noted organomegaly or masses. 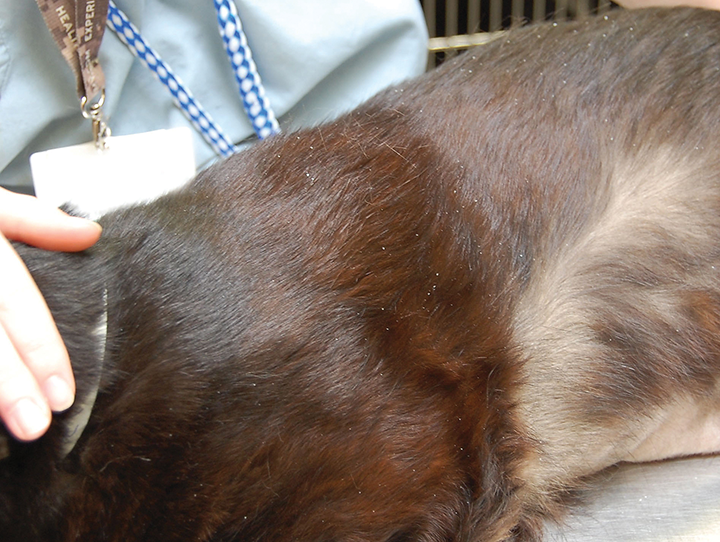 A low-dose dexamethasone suppression test was performed to rule out Cushing’s disease and showed a predexamethasone suppression cortisol of 0.9 μg/dL and an 8-hour postdexamethasone suppression of 0.6 μg/dL. Adrenal panel cortisol concentrations pre-ACTH and at 30 and 60 minutes post-ACTH stimulation were 0.65 μg/dL, 1.15 μg/dL, and 1.11 μg/dL(range, 9.5-18.3 μg/dL), respectively. The panel also showed hyperestrogenemia, hyperprogesteronemia, hyperaldosteronemia, and hypocortisolemia (Table). Endogenous adrenocorticotropic hormone (ACTH) concentration measured using an assay validated for dogs and horses at Michigan State University was 2 pmol/L. The DiaSorin immunoradiometric assay is validated for use in cats for ACTH measurement, but it is not commercially available to the authors' knowledge.1,2

*ACTH reference range for dogs; range not established for cats

†Report did not specify whether result was 30 minutes or 60 minutes post-ACTH stimulation.

The patient remained normokalemic (4 mEq/L; range, 3.9-5.3 mEq/L) despite increased aldosterone concentration, possibly because of early disease detection, because of a compensatory decrease in urinary potassium excretion in response to hypokalemia, or secondary to kidney disease.

Diabetes mellitus and hypocortisolemia secondary to a functional adrenal tumor

This patient’s diabetes mellitus was likely caused by insulin resistance that resulted from increased progesterone. Hypocortisolemia can occur secondary to a progesterone-secreting adrenal tumor. This patient had a functional adenocarcinoma that was secreting progesterone, aldosterone, and estrogen. 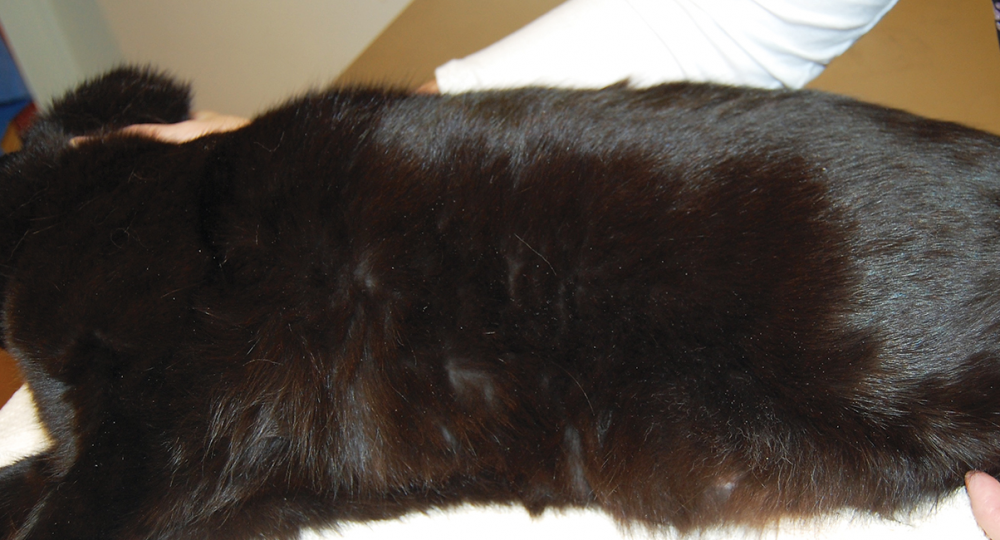 Figure 2 Seven months postadrenalectomy, the patient’s alopecia has resolved and the hair coat color has returned to black.

A mild increase in baseline estradiol was detected 7 months postoperatively, and estradiol concentration post-ACTH stimulation was decreased at both 7-month and 10-month recheck examinations. Because less than 1% of estradiol is secreted by the adrenal gland and most estradiol is secreted by peripheral tissue, the persistently high estradiol concentration may not have been representative of adrenal activity.3 Hyperprogesteronemia and hyperaldosteronemia were resolved at subsequent follow-up examinations (Table). The patient continued to do well postoperatively for approximately 6 years until he was euthanized because of congestive heart failure.

Adrenocortical carcinomas secreting aldosterone and progesterone or other steroid sex hormones in cats have been reported.4,5 This case is unusual because the adrenocortical carcinoma secreted at least 3 different types of steroid hormones, and the patient had dermatologic abnormalities (ie, symmetric alopecia, hair coat color change).

Symmetric alopecia has been reported in cats with progesterone-secreting adrenal tumors and in cats treated with progestin injections (ie, medroxyprogesterone acetate).6-8 Carbohydrate intolerance is a common result of progesterone-mediated insulin antagonism in cats and is likely a causal factor for diabetes mellitus.8,9

Lightening of the hair coat from black to red has been observed in some canine endocrinopathies, including Sertoli cell tumors, Cushing’s disease, and hypothyroidism.6 In cats, reddening of the hair coat appears to be less common. The hair coat color change in this patient, which resolved postadrenalectomy, may have been caused by increased estradiol concentration or may have occurred secondary to low ACTH concentration. Estrogen has been reported to cause increased hair pigmentation in mice,10 and a recent case report described a cat with hypocortisolemia and subtle hair coat color changes that resolved with removal of an estrogen-secreting adrenal tumor.2

Alternatively, low ACTH concentration leading to low α-melanocyte-stimulating hormone (MSH) concentration might have been involved in the coat color change. ACTH is a precursor of α-MSH, and both share a common amino acid sequence. A decrease in ACTH production would indirectly decrease the α-MSH concentration. ACTH and α-MSH are both full agonists of the melanocortin-1 receptor (MC1R).11

Activation of MC1R on melanocytes leads to production of eumelanin (black-brown pigment), whereas inhibition of MC1R results in production of pheomelanin (yellow-red pigment). Low concentrations of both ACTH and α-MSH would decrease MC1R binding and subsequently decrease synthesis of eumelanin and increase synthesis of pheomelanin.6,11 The opposite occurs in humans with Addison’s disease; hyperpigmentation caused by increased ACTH concentration is a common finding in these patients.12

The relationship between low ACTH and cortisol concentrations and sex hormone-secreting adrenal tumors is poorly understood. Possible causes include negative feedback of cortisol from increased displacement of free cortisol from cortisol-binding protein by sex hormones and negative feedback of ACTH from progesterone or unmeasured intermediate metabolites.4,7,9 Exogenous progestins such as megestrol acetate have been shown to suppress endogenous ACTH secretion.7,13 All of these sources can result in hypocortisolemia caused by suppression of the hypothalamic–pituitary–adrenal axis.