Chronic Diarrhea in a Miniature Schnauzer

Milo, a 3-year-old neutered male miniature schnauzer, was presented for diarrhea and weight loss of 1- to 2-months’ duration. Routine fecal flotation and microscopic examination of a wet-mount and air-dried/stained fecal smear were performed. No parasites were identified, but sulfadimethoxine (initial dose, 55 mg/kg PO once, then 27.5 mg/kg PO every 24 hours) and fenbendazole (50 mg/kg PO every 24 hours) were administered empirically for 5 days. Chronic diarrhea became more severe over the next several weeks; hyporexia and weight loss also occurred. Milo was referred to a specialty clinic.

On presentation at the specialty clinic, Milo was 9 lb (4.1 kg) and appeared emaciated; BCS was 1/5. An episode of brownish-grey liquid diarrhea with blood occurred during physical examination.

*All other values were within reference limit.

CBC, serum chemistry profile, and rectal scraping for cytology were performed. CBC and reticulocyte concentration indicated a mild, normocytic, normochromic, nonregenerative anemia consistent with anemia of inflammatory disease (ie, anemia of chronic disease; Table 1), which is a common cause of mild to moderate normocytic, normochromic, nonregenerative anemia secondary to production of inflammatory cytokines.1 Impaired iron absorption, iron sequestration, decreased bone marrow response to erythropoietin, and decreased RBC life span contribute to anemia of inflammatory disease.1,2 In this case, hematochezia also likely contributed to the anemia. Eosinophilia and an acute inflammatory leukogram, characterized by a neutrophilia with a marked left shift, were also noted. 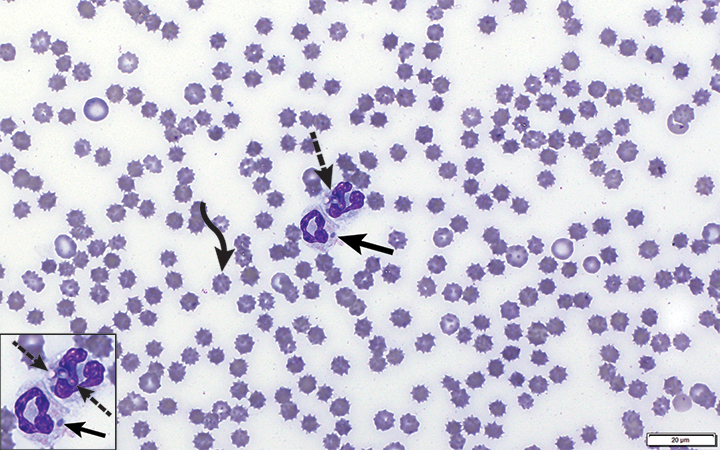 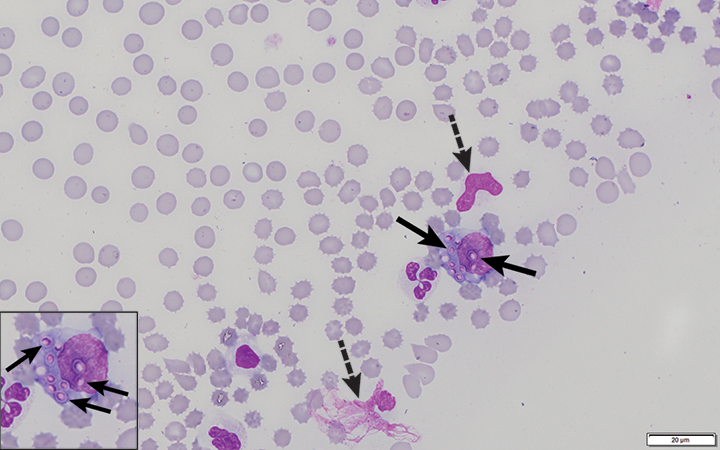 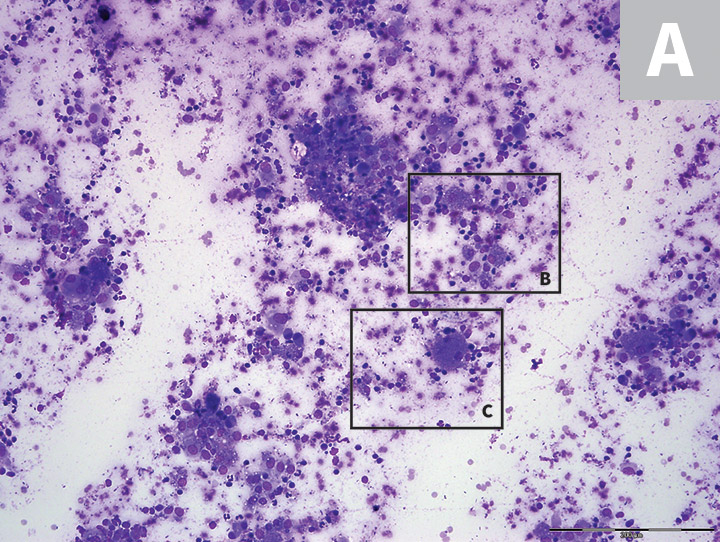 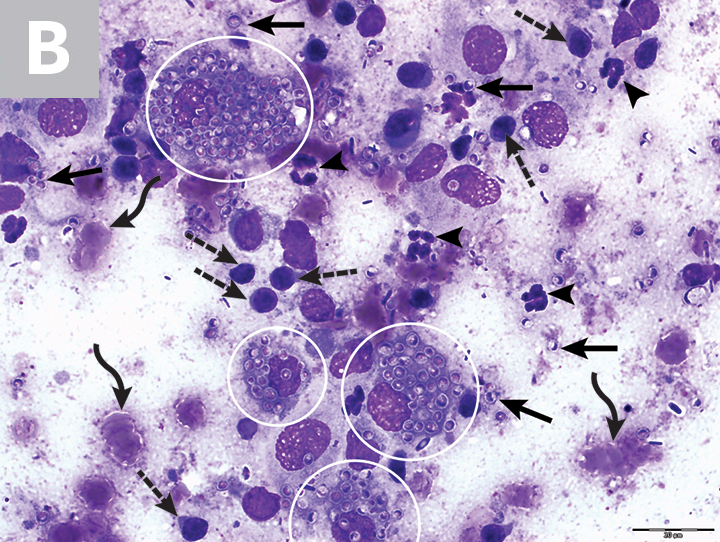 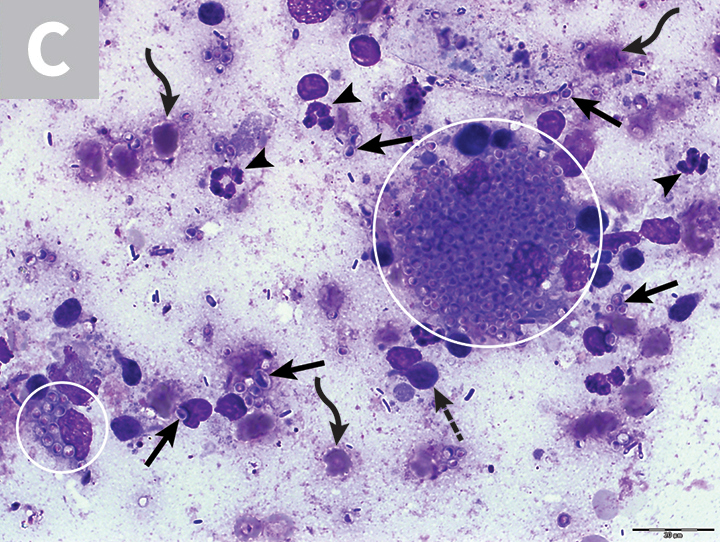 Serum chemistry profile abnormalities (Table 2) indicated low serum creatinine (likely due to decreased muscle mass), hypoalbuminemia (likely due to a combination of loss from the GI tract [primary] and decreased production by the liver associated with a negative acute phase protein response), and hypocalcemia (most consistent with hypoalbuminemia and a resulting decreased protein-bound fraction). Albumin is a negative acute phase protein; mild decreases are thus expected with inflammation. Free calcium (ie, ionized calcium) concentration was not measured.

Rectal scraping was highly cellular with numerous inflammatory cells, including predominantly macrophages and fewer neutrophils, lymphocytes, and plasma cells. Some macrophages and neutrophils contained varying numbers of 3- to 5-μm yeast with a basophilic nucleus and a small clear perinuclear halo. Abundant bacteria, frequent RBCs, and a background of amorphous cellular and fecal debris were also present (Figures 3). There was no evidence of fungal pulmonary nodules on thoracic radiographs.

*All other values were within reference limits.

Hospitalization was recommended, but Milo’s owner declined because of financial constraints. Fluconazole (10 mg/kg PO every 12 hours) was prescribed, and he was discharged with a guarded prognosis. Euthanasia was advised if Milo did not respond to treatment and continued to decline. Milo died at home 9 days after presentation to the referral clinic.

Histoplasmosis is a soil-born, dimorphic fungus that exists in mold at 77°F (25°C) to 86°F (30°C) and in yeast at body temperature and is the most commonly diagnosed major systemic mycosis infection in dogs.3,4 The central United States, especially Mississippi, Missouri, Tennessee, and the Ohio River Valley, are considered highly endemic areas, but histoplasmosis can also occur in other areas and is considered endemic in 31 states.4,5

Histoplasmosis occurs when Histoplasma capsulatum microconidia enter the body via inhalation, are subsequently phagocytized by alveolar macrophages, and transition in the lungs to unicellular yeast, which can replicate intracellularly and result in granulomatous inflammation. The fungus can then disseminate via the bloodstream or lymphatic system.4 Immunocompetent patients may be subclinically infected with small numbers of organisms for years, but subsequent immune suppression can result in proliferation, leading to clinical disease and dissemination.

Diagnosis is often made via cytologic evaluation of infected tissue and blood smears.6 Antibody serology is available, but a positive result only indicates exposure to H capsulatum, not active infection or clinical disease. H capsulatum antigen enzyme immunoassay tests on urine samples and serum chemistry profile are also common and demonstrate high specificity and sensitivity for diagnosing histoplasmosis in dogs.7,8

Itraconazole has been the preferred treatment for histoplasmosis, but recent studies indicate fluconazole can be effective with no differences in survival, clinical remission, or disease relapse rates as compared with itraconazole.6,9,10 Length of treatment depends on severity and chronicity of disease. A minimum of 6 months of antifungal treatment is typical.7 Treatment should continue for 2 months after resolution of clinical signs and decline of urine and/or serum antigen.7-9 Additional supportive care (eg, IV fluids, nutritional support, blood transfusions, oxygen therapy, antiemetics, medications to manage consequences of organ [eg, hepatic] failure) may be required based on severity of disease.7 Systemic glucocorticoids are contraindicated due to their immunosuppressive effects.7

Prognosis is fair in dogs with pulmonary histoplasmosis and guarded to poor in those with disseminated disease. Outcome depends on immune status of the patient.4

There is no vaccine to prevent histoplasmosis. Prevention consists of avoiding exposure to infected soil. Soil containing bird or bat feces can enhance the growth of H capsulatum. Humans and pets that disturb the soil or live in poorly ventilated areas with an increased density of bats or birds (eg, caves, chicken coops) are at increased risk7; however, histoplasmosis has also been identified in pets that live exclusively indoors.7

Transmission from pets to humans has not been reported,3 but disease in dogs and cats can indicate increased risk for humans exposed to the same environment. Patients that succumb to this disease should be disposed of promptly via cremation, not burial.7