Melissa A. Kennedy, DVM, PhD, DACVM, is an associate professor in the department of biomedical and diagnostic sciences and the director of the clinical virology laboratory at University of Tennessee, where she also earned her DVM and PhD in comparative and experimental medicine. She is certified by the American College of Veterinary Microbiologists in virology, immunology, and bacteriology. Her research has focused on feline coronavirus, feline calicivirus, and viral pathogens affecting domestic dogs in sub-Saharan Africa. 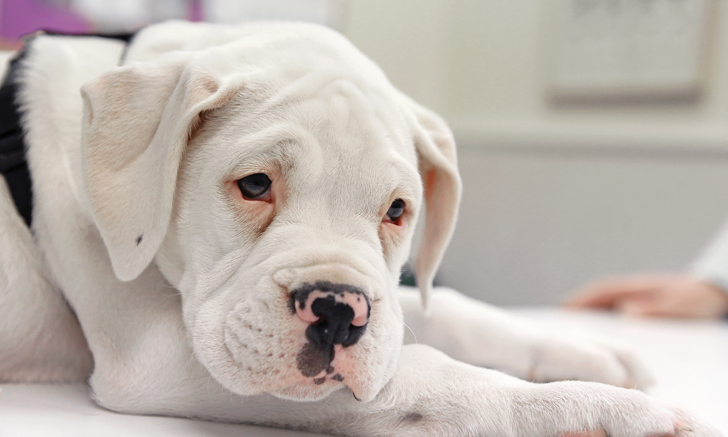 Canine parvovirus (CPV) is an important pathogen that affects canids worldwide. CPV emerged in dogs in the late 1970s from feline panleukopenia virus. It is postulated that a wildlife host played a role in adaptation of the feline parvovirus to dogs.1

The virus itself is small and nonenveloped, making it one of the most robust viruses affecting animals. Because of its environmental persistence, both indirect and direct contact can efficiently spread the virus. When protected by organic matter, the virus may remain infectious for months.2 Seasonality of infection in the United States has been reported, with most cases occurring from July to September.3 This seasonality likely reflects the increase in susceptible populations with the advent of waning maternal immunity in puppies born in spring and summer.

CPV’s genome is single-stranded DNA of approximately 5 kilobases in length. The mutation rate of parvoviruses is actually closer to that of RNA viruses, most likely due to its single-stranded structure. Because of the virus’ mutability, variants of the original emergent virus have arisen, notably CPV-2a, 2b, and 2c.4 These variants differ from the original CPV-2 in only a few amino acids but have led to more efficient replication in the canine host and to reacquisition of the ability to replicate and cause disease in cats. In some areas of the world (eg, Vietnam, Taiwan), CPV-2 variants are more commonly isolated than feline panleukopenia virus.1,5,6 These variants may cause disease similar to panleukopenia.7

CPV-2, recognized as an enteric pathogen, is the agent of systemic infection and disease. On contact with the oral mucosa, the virus replicates in the local lymphatics, then spreads rapidly via the lymphatics and bloodstream, affecting cells systemically. The incubation period varies with immune status and virus dose and may range from 4 to 14 days.8 The virus targets cells that are rapidly dividing, as its propagation is completely dependent on replicating cells. In dogs, the virus targets hematopoietic bone marrow cells and divides lymphocytes in lymphoid tissue as well as intestinal crypt epithelia. This can lead to profound leukopenia, hemorrhagic diarrhea, lymphoid hypoplasia, and, in some cases, anemia. Concurrent disease or infection with other agents as well as stressors may worsen disease severity.8

Classic CPV infection and disease typically affects puppies as their maternal immunity wanes but can also affect dogs between 6 weeks and 2 years of age that are immunologically naïve to the virus.9 Typical clinical presentations begin with depression and anorexia. Fever may occur, but some dogs are presented with subnormal temperature and hypovolemic shock. Vomiting, followed by hemorrhagic diarrhea, may occur. Low WBC counts, especially lymphocytes and neutrophils, along with the loss of intestinal integrity as a barrier, may lead to bacterial sepsis and endotoxemia and is often the cause of mortality in affected animals. Mortality in untreated puppies may exceed 70%; mortality in adult dogs is usually less than 1%.1

Diagnostics should include a CBC. Typical findings include a leukopenia with a lymphopenia and neutropenia. Some dogs may also exhibit anemia from blood loss as well as bone marrow effects. CBC monitoring can help gauge progress and assess prognosis, as the patient is likely to recover if improvement is seen in CBC results within 24 hours. If WBC counts remain decreased for 24 to 48 hours, the prognosis deteriorates.10 Serum chemistry abnormalities may include hypoproteinemia and hypoalbuminemia, hypoglycemia, and electrolyte abnormalities. Hypoalbuminemia has been associated with prolonged hospitalization.5 Diagnostic imaging is generally nonspecific for gastroenteric disturbances but can help rule out foreign bodies or intussusception.

Clinical presentation of CPV infection may resemble other acute gastroenteric disturbances, including intussusception; foreign body; other gastroenteric viral, bacterial, parasitic, and protozoal pathogens; and hemorrhagic gastroenteritis. Confirmation of diagnosis relies on virus detection, which is primarily accomplished through point-of-care ELISA tests that detect the virus in feces. Specificity of most point-of-care ELISA tests is high (ie, generally >90%), but sensitivity varies.11 PCR can also be used for sensitive detection of the virus. It is important to interpret results in light of vaccination history, as both tests can detect vaccinal virus in 4 to 10 days of vaccination.12,13 However, ELISA tests usually give weak positive results, and real-time PCR results will manifest a high cycle threshold value with vaccine detection. False-negative results can occur with fecal antigen ELISA due to low viral load and/or high neutralizing antibody levels.14 Dogs suspected of having parvovirus that test negative via ELISA should be tested by fecal PCR to confirm parvovirus if necessary.

The most notable gross lesions in dogs that die from CPV are hemorrhagic enteritis and enlarged mesenteric lymph nodes and Peyer’s patches.1 Intestinal crypt necrosis along with significant lymphocyte depletion in Peyer’s patches, lymph nodes, spleen, and thymus can be histologically observed.1

CPV infection is primarily treated with aggressive supportive care with fluid therapy, antibiotics, antiemetics, and nutritional support. Thus, hospitalization is required for most dogs with CPV infection, although recent evidence suggests that patients may be considered for outpatient therapy after fluid resuscitation has been performed.15

Although their use is controversial, synthetic colloids (hydroxyethyl starch [5 mL/kg over 15 minutes]) may also be used in hypovolemic and/or hypoalbuminemic dogs with CPV. Recent concerns about acute kidney injury, coagulopathy, and increased risk for death associated with the use of synthetic colloids in humans and veterinary patients should be carefully considered on a case-by-case basis.17-19 Animals with signs of hypovolemia should be treated with IV fluids, as subcutaneous or oral fluids are not efficient. Intraosseous catheters may be used in patients in which IV access is difficult. In some cases, vasopressors (eg, norepinephrine, dopamine, vasopressin) may be required if there is little to no response to fluid therapy.

Once perfusion is restored, interstitial fluid deficit should be corrected by rehydrating the patient. Physical examination findings of dehydration may include dry mucous membranes, skin tenting, sunken eyes, and/or a doughy abdomen on palpation. Dehydration should be roughly estimated based on physical examination findings and the fluid deficit replaced with a balanced isotonic crystalloid over 4 to 12 hours (up to 24 hours if congenital heart disease is present) using the following equation:

Antibiotic therapy should be initiated because of sepsis that results primarily from bacterial translocation from the GI tract.

A broad-spectrum antibiotic with gram-positive, gram-negative, and anaerobic coverage should be provided. Examples of potential combinations include:

Aminoglycosides should not be used in patients with compromised renal blood flow (ie, patients with ongoing hypotension). However, if used, daily urine monitoring is necessary to assess for proteinuria, glucosuria, or development of casts, which can indicate tubular damage.

Nausea should be treated with an antiemetic (eg, maropitant [1 mg/kg IV or SC q24h25], dolasetron [0.6 mg/kg PO, IV, or SC q24h26], ondansetron [0.5-1 mg/kg IV or PO q12h27], metoclopramide [0.2-0.5 mg/kg SC, IM, or PO q8h28 or 0.01-0.09 mg/kg/hr as a continuous IV infusion]). Nutritional support should be considered early, as it decreases the length of hospitalization in dogs with CPV.29 Feeding tubes (nasogastric or nasoesophageal) should be considered in the first 24 hours for inappetent patients. Dogs should be allowed to eat as soon as they show interest in food.

Recovered animals may continue to shed the virus for at least 2 weeks. Subclinically infected dogs, as well as cats infected with CPV, may shed the virus in the absence of any clinical signs.36

Modified live vaccines are available for CPV-2 prevention; most contain CPV-2b. Studies have shown that vaccination with CPV-2b produces cross-reactive protection against CPV-2a and 2c and CPV-2b.37 The most common cause of vaccine failure is interference from maternal antibodies seen in puppies younger than 16 weeks of age and occasionally as late as 18 to 20 weeks of age.38 Although imperative for protection in the first few weeks of life, maternal antibodies may neutralize vaccinal virus and inhibit an adequate acquired response.1

Disinfection of CPV requires solutions with oxidizing activity, such as accelerated peroxide compounds or sodium hypochlorite (≈3% dilution; half cup per gallon of water) prepared daily and applied after removal of organic matter. Disinfectants without this capability, such as those using quaternary ammonium compounds as their active ingredient, have limited ability to inactivate nonenveloped viruses.40