Figure 1 A 10-year-old neutered male golden retriever that repetitively licked his right pelvic limb for several months. The dog was painful on lumbosacral palpation and exhibited significant nail wear and quick exposure due to scuffing of both pelvic limbs. The repetitive licking was attributed to pain and stopped after the dog was treated with NSAIDs and paw coverings were applied during walks. Medical differentials, including sources of pain or discomfort, should be ruled out before making a diagnosis of CD, especially in senior dogs or those with recent onset of repetitive behavior.

Canine compulsive disorder (CD) involves abnormal, repetitive behavior resulting from anxiety or stress without an apparent inciting trigger and when other physical or behavioral causes have been excluded.1,2

CD behavior may be self-reinforcing and difficult to interrupt without physical intervention, which may cause physical injury. Intensity and/or frequency of the behavior typically disrupts daily functions. Approximately 2% to 5% of patients seen by veterinary behaviorists are diagnosed with CD3; however, CD may be underdiagnosed in the general population because owners may not seek help until the behavior is severe.

Clinical characteristics of CD can include a diverse group of behaviors (Table 1) and can be classified as locomotor, visual or hallucinatory, oral, or self-directed. The pathophysiology of canine CD is likely multifactorial, considering the range of clinical presentations. Manifestation of CD may be partly dictated by genetics due to breed predilections (Table 1), and CD incidence may be higher in specific pedigrees.2,4 Geneticists have identified an allele in Doberman pinschers with flank sucking that occurs more frequently in affected dogs.5

*Pain and neurologic disorders (eg, seizures) are physical differentials for all repetitive behaviors.
†Seizures have been specifically implicated as a cause of tail chasing in bull terriers.20

Neuroimaging studies of dogs with CD have demonstrated altered function in the subcortical region of the brain, including the cortico-striato-thalamo-cortical pathways implicated in human obsessive-compulsive disorder.6 These brain regions are associated with serotonergic and dopaminergic systems; in a study, dogs with CD had lower serotonin-receptor binding as compared with dogs in an unaffected control group.6 Dogs with CD treated with serotonergic and dopaminergic drugs (eg, clomipramine, fluoxetine) have shown improved clinical signs,7-13 which supports the role neurotransmitters play in dogs with CD.

Learning can affect development and continuation of CD.14 Situations that incite anxiety, frustration, and/or conflict may cause engagement in displacement or redirected behavior (Table 2), which can reduce anxiety and provide a coping mechanism that may result in recurring and repetitive behavior. Pet owners may also perpetuate the behavior through inadvertent reinforcement.14 Over time, the behavior may become ingrained and uncoupled from the original trigger.

Clinical signs often manifest before a dog is 1 year of age.2,4,8 The median age of onset is <1 year for tail chasing and flank sucking2,4 and >1 year for acral lick dermatitis.2,13 Dogs with CD may not be presented until the dog is older because owners may consider repetitive behavior in young dogs to be normal and not seek treatment until the behavior intensifies.1

CD is a diagnosis of exclusion; behavioral diagnoses can only be made after physical causes of repetitive behavior have been ruled out (Figure 1). Table 1 includes a brief list of medical differentials for various canine compulsive behaviors.

A thorough behavior history—including, but not limited to, a description or documentation of the behavior (ideally, a video), initiating factors, situations in which the behavior is likely to occur, owner response, and previous treatment attempts and degree of success—should be obtained before a diagnosis is made. Behavior history forms are available (see Suggested Reading) and can be useful for identification of comorbid behavior disorders.

Not all repetitive behavior is compulsive; differential diagnoses for repetitive behaviors are listed and defined in Table 2. An audience-responsive component should be considered if there is a history of reinforcement and if the behavior primarily occurs in the presence of humans, stops when the owner walks away, or stops when the dog receives a reward. Displacement behavior (eg, a dog licking its paw when alone) typically occurs during stressful situations and remains linked to an anxiety-provoking event but can evolve into CD with repetition or additional stress.

After physical and alternative behavior explanations have been excluded, an abnormal repetitive behavior that affects a dog’s quality of life may be attributed to CD (Figure 2). 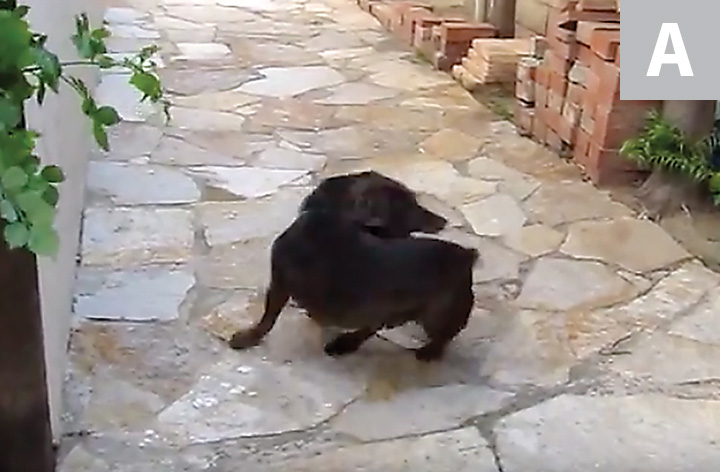 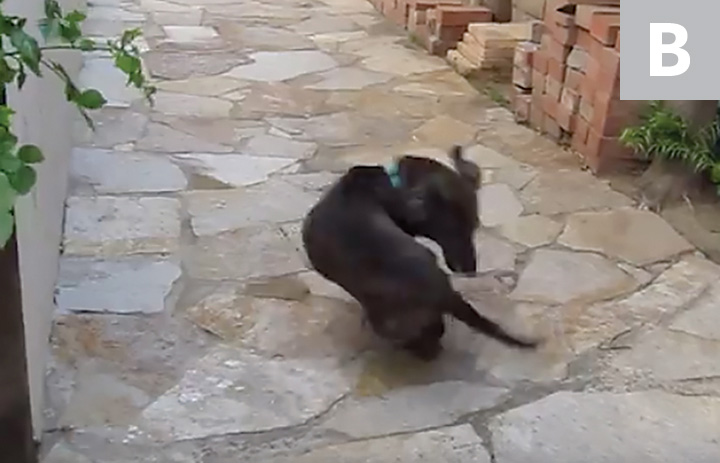 To prevent unintentional reinforcement of CD behavior, pet owners should not provide or remove positive reinforcements (eg, attention, food, toys) when the dog engages in repetitive behavior. Because CD behavior becomes more ingrained the more frequently it is practiced, treatment should focus on behavior prevention. Pet owners can identify situations in which CD behavior is likely to occur to help with avoidance (eg, restricting yard access to prevent the dog from repetitively running laps around the perimeter).

Dogs should be taught an alternative behavior that can be cued and reinforced when the compulsive behavior is likely to occur. Dogs that pace may be encouraged to fetch an object. Dogs that shadow chase may be rewarded for lying down with their chin on the floor. Dogs with pica may be fed exclusively from puzzle toys, which also provide mental enrichment.

Pet owners should not interact with their pet in an inconsistent manner (eg, when a dog jumps in greeting and is alternately praised and punished). Inability to predict how a human will respond may cause the dog to feel anxious, confused, and/or frustrated; consistent, predictable interactions can help alleviate stress. A cue–response–reinforcement pattern in which a cue (eg, sit command) is given, the dog responds (eg, dog sits), and the desired behavior is reinforced (eg, a treat is given) is recommended. The consequence of undesirable behavior should be withdrawal of attention (eg, owner walks away when the dog jumps up).

Environment modification and/or physical restraint may be necessary to prevent engagement in CD behavior. Opaque privacy film on reflective surfaces can reduce light chasing. Dogs that pace in the yard can eliminate while on a leash. Barriers (eg, baby gates, pens, crates, tethers) can prevent access to trigger environments and restrict movement, which can minimize repetitive locomotor behavior. Dogs with self-injurious behavior may require basket muzzles, bandages, or Elizabethan collars, although the CD behavior may recur once these are removed.2

Because CD is associated with anxiety, psychopharmaceuticals that affect serotonin can reduce the frequency and intensity of CD behavior. Clomipramine (1-2 mg/kg PO q12h), a primarily serotonergic tricyclic antidepressant, has been the drug of choice to treat CD and has shown efficacy in the treatment of tail chasing in terriers and other repetitive behaviors.8-11 Fluoxetine (1-2 mg/kg PO q24h), a selective serotonin reuptake inhibitor, has been shown to be as effective as clomipramine in the treatment of tail chasing in dogs11 and more effective than placebo in the treatment of acral lick dermatitis.13 In a placebo-controlled clinical trial, owners of dogs given fluoxetine were significantly more likely to report a reduction in the perceived severity (ie, absent, mild, moderate, severe, very severe) of their dog’s CD behavior than owners of dogs given placebo; however, a significant difference in frequency and duration of CD behavior between fluoxetine- and placebo-treated groups was not found.12 Doses of clomipramine and fluoxetine used to treat CD varied between studies.9-13 One study reported that, although not definitively determined in dogs, clomipramine at 3 mg/kg PO q12h significantly reduced the severity of CD behavior.10 In another study, clomipramine was increased above the initial starting dose (1-2 mg/kg PO q12h) in 3 of 18 dogs to reduce tail chasing.9 In humans, treatment of obsessive-compulsive disorder typically requires higher doses of pharmaceutical agents as compared with other anxiety disorders.16

There are no FDA-approved medications for CD treatment in dogs. Because medications to treat CD behavior are extra-label, informed owner consent should be obtained, particularly because higher doses may be necessary in some patients and there may be a higher risk for adverse effects. Caution should be taken in dogs with cardiovascular disease. In humans, tricyclic antidepressants (eg, clomipramine) are associated with adverse cardiovascular effects (eg, arrhythmias) and prolongation of the QT interval on ECG.17 In a study of dogs, serum clomipramine concentration was positively correlated with an increase in P-wave duration but was not significantly correlated with QT interval.18 However, in a drug safety study, bradycardia and arrhythmias were observed in some dogs that received ≤20 mg/kg/day for 6 months.19

Prognosis for CD is guarded to fair, and owner expectations should be managed. Reduction of the severity and frequency of CD behavior is a realistic treatment goal, as it is unlikely treatment will stop repetitive behavior completely. Treatment should focus on improving quality of life (eg, limiting self-injury, allowing opportunities for enjoyable activities, distracting from repetitive behavior).

Frequent communication between the clinician and pet owner is essential for monitoring the patient’s response to treatment and providing adjustments as needed. Situations that increase stress (eg, moving, new pet or household member) may trigger a relapse in CD behavior; owners should be encouraged to contact the clinician if necessary. Preemptive intervention before CD behavior affects the dog’s or pet owner’s quality of life typically provides the highest likelihood for success for CD treatment in dogs.