Canine Aggression Toward Other Dogs & Humans

Amy L. Pike, DVM, DACVB, is owner of the Animal Behavior Wellness Center in Fairfax, Virginia. She earned her DVM from Colorado State University. Dr. Pike was a captain in the US Army Veterinary Corps and was responsible for US customs and border patrol horses as well as military working dogs. She has since worked exclusively in small animal practices, with intense focus on canine and feline behavior, and has been board certified since 2015.

Because a genetic predisposition for behavior problems is possible, it is not recommended to breed dogs that demonstrate signs of aggressive behavior.

As with canine-directed aggression, breeding is not recommended, and spaying or neutering after onset is unlikely to affect incidence.

The following has been modified to assess for a history of aggression.

The approach to diagnosis and treatment is similar for both human-directed and canine-directed aggression and should begin with taking a thorough behavior history; the SOCRATES Mnemonic for Pain Assessment was originally developed for assessing pain but can be modified to assess a history of aggression.11

A primary clinical disorder that could contribute to or cause aggression should also be ruled out (see Aggression Caused by a Medical Condition), as increased patient irritability can lead to or increase the likelihood of behavior disorders, even when no clinical underpinning is evident.12 A physical examination (including orthopedic and neurologic evaluation), CBC, serum chemistry profile, and urinalysis should be performed and followed by further testing (eg, imaging, endocrine testing) as indicated by initial diagnostics. After clinical disorders have been ruled out or appropriately treated, the behavior disorder can be addressed with a comprehensive treatment plan.

AGGRESSION CAUSED BY A MEDICAL CONDITION

The following is a case in which the patient showed canine-directed aggression caused by a medical condition (ie, otitis externa).

Dwight D. Eisenschnauzer (ie, Ike), a 2-year-old neutered male giant schnauzer, has a history of chronic Malassezia spp otitis externa. When Ike experiences a recurrence of otitis, he displays resource guarding of his toys (Figure), owner, food, and resting spots from another dog in the house (Scoobert, a 1-year-old neutered male miniature schnauzer). When Ike is not experiencing a recurrence of otitis externa, he is friendly with Scoobert and does not resource guard.

Treatment for interdog aggression involves early recognition of aggression (eg, Ike blocking Scoobert’s access to the owner or taking treats quickly and frenetically in Scoobert’s presence) or signs of otitis externa (eg, head shaking, ear scratching with accompanying groaning). When this occurs, resources should be managed, medical treatment should be given for otitis externa, and time of separation between the dogs should be increased until the otitis externa is resolved. 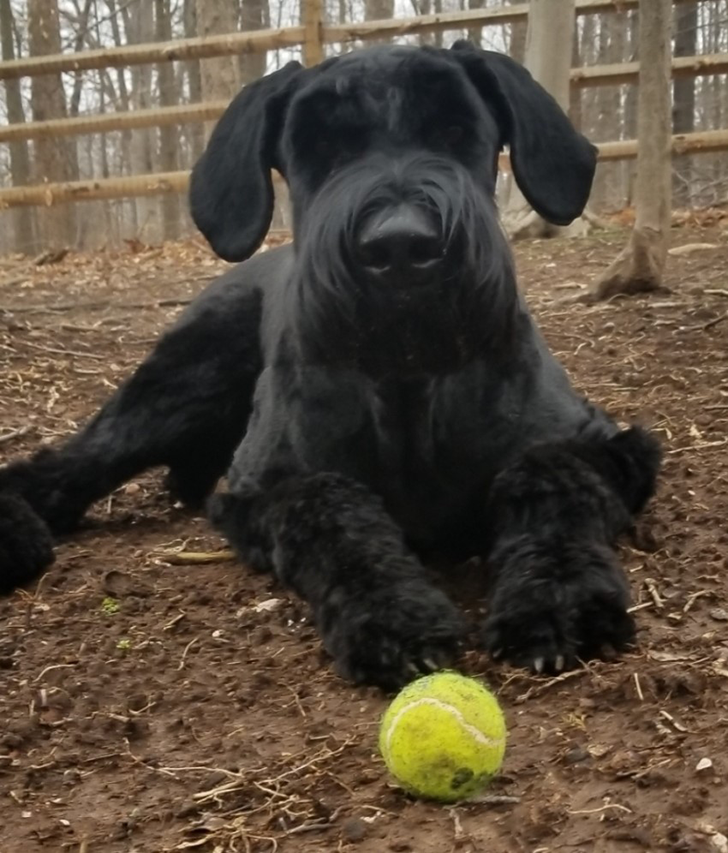 FIGURE Ike with a tennis ball (ie, resource) that he guards during cases of recurrent otitis externa

Aggression can be diagnosed based on the target and motivation of aggression. Targets are either familiar (eg, typically dogs or humans living in the same household, frequent household visitors) or unfamiliar. Humans considered familiar by the owner can still be considered unfamiliar by the dog. It is important to identify the target because management, behavior modification strategies, and prognosis differ based on the target.

Aggression may be based on the following:

Management is the first step in a comprehensive treatment plan for aggression and begins with identification and avoidance of triggering situations. Owners should be able to recognize signs of fear, anxiety, stress, and nonverbal precursors of aggression in their pet to help predict and avoid aggressive episodes; these signs include defensive postures such as pinned-back ears, lip licking, panting, wrinkled brow, gaze aversion, rapid blinking, wrinkled nose, crouched body, and tucked tail. Offensive postures include a high-held tail, leaning forward, direct staring, erect ears, and a tall, stiff body position. Recognition of body language is especially important when complete separation or management is not feasible.

When the target is an unfamiliar dog, locations such as dog parks, doggy daycare, and clinic and groomer waiting rooms should be avoided. At the clinic, owners can stay in their vehicle with the dog until they can be taken straight to the examination room. Triggering situations (eg, leash walking during high-traffic times, leash walking in areas in which other dogs may be encountered, guests bringing a dog to the home) should also be avoided.

When the target is unfamiliar humans, avoidance can include not allowing visitors in the home unless the dog is confined in another room, taking the dog on a leashed walk during low-traffic times and in locations in which a minimal number of humans will be encountered, crossing the street when others are approaching, and never allowing unfamiliar humans to pet the dog.

When the aggression target is a familiar dog or human, complete avoidance can be difficult. Conflict over resources can be avoided by feeding the dogs in separate confined locations and providing high-value bones, chews, or toys only during separation or confinement. Management of all resources may be necessary in some cases, especially if the owner is unable to effectively monitor or identify body language indicators, but can increase stress and may not be possible in all cases. Arousal, redirected aggression, and predation can only be completely prevented by separate confinement of the dogs at all times, as the inciting triggers are often random and unpredictable and aggression can be triggered quickly with few warning signs.

Owners should be advised against attempting to take a stolen or given object (eg, chew bone) away from the dog. Aggression caused by fear, handling, redirection, or social conflict typically includes a behavior trigger (identified during the behavioral assessment); avoidance of the trigger is paramount and training is needed, including cue-response-reward–based training (eg, training the dog to stay off furniture), systematic desensitization, and/or counterconditioning to physical handling or use of a collar, leash, or harness.

Other management techniques include basket muzzle training (see Suggested Reading), using baby gates to confine the dog, or crate training. Muzzling does not prevent aggression but can prevent serious injuries when aggression is triggered. Muzzling a dog that remains in a provocative yet avoidable situation should be considered inhumane.

Behavior modification should follow management when treating aggression. General clinicians should emphasize the importance of behavior modification and refer owners to a board-certified trainer, behavior consultant, or veterinary behaviorist with appropriate credentials, educational background, and continuing education (see Suggested Reading). It is important to note that punishment tools (eg, shock collars [ie, stim collars, electronic collars], prong or pinch collars, choke collars, use of bags of chains or cans of pennies) and techniques (eg, leash popping, alpha rolls, other dominance-based methods) are not recommended. Many punishment-based trainers claim to treat aggression, but these techniques ultimately worsen the disorder and put the safety of the owner and others at risk.13

Medication therapy includes administration of products (eg, pheromones, nutraceuticals) and/or medication to decrease fear, anxiety, stress, and/or overall arousal. FDA-approved behavior medications are only approved for treatment of specific behaviors in dogs (eg, separation anxiety, noise aversion). These products and medications may caution against use for treatment of aggression due to possible bite disinhibition, in which anxiety preventing the dog from becoming more aggressive or using less inhibited forms of aggression is relieved. This potentially allows the dog to become more emboldened, more offensive, and less inhibited, thereby increasing the potential for aggression. This phenomenon is rare, but management strategies must be in place and owners warned of this potential before anxiolytic interventions are implemented.

Limited data are available on various medications and products. α-casozepine has been shown to be as effective as monoamine oxidase inhibitors (eg, selegiline) for treatment of anxiety-related disorders, although aggression was not specifically considered.14 Clonidine and fluoxetine in combination with clorazepate have been shown to help with aggression.15,16 Trazodone has been shown to help dogs with anxiety-related disorders17 and thus could be useful in cases of aggression that are a result of fear or anxiety. In a small study comparing clomipramine with amitriptyline, clomipramine was shown to help with aggression and was as effective as amitriptyline in decreasing aggression.18

Appropriate socialization in a safe, controlled environment when puppies are 3 to 14 weeks of age is critical to prevent aggression toward other dogs. Clinicians should not recommend avoiding other dogs until after the full round of vaccinations, as the risk for developing infectious diseases at puppy socialization classes has been shown to be negligible.19

Clinicians must inform owners of the prognosis and risk factors associated with dogs that are aggressive toward human members of the household, especially when euthanasia is a possibility. Risk factors that should be considered include20:

Prognosis depends on the owner’s ability to identify the aggression triggers, manage and avoid those triggers, and recognize early warning signs of the aggression, as well as the size of the dogs involved, extent of any injuries that occurred previously, and the dog’s initial response to treatment. Setting realistic expectations is important so the owner can determine if they are capable of continuing treatment and assess the possibility of rehoming the dog. The clinician and owner can determine if humane euthanasia should be considered as an alternative option. If there are children or elderly people at risk, serious consideration should be made for rehoming or euthanasia.

Regular follow-up is essential to identify management and medication failures and to assess if the behavior modification program is progressing appropriately and whether adjustments should be made. Recheck evaluation should be performed at least every 4 weeks. Owners should meet with a veterinary behaviorist, trainer, or behavior consultant weekly or every other week. On recheck examination, improvement in intensity of the behavior, frequency of the behavior, and recovery period after being triggered should be assessed. Although a decrease should be seen in all of these areas after treatment, in severe cases, improvement may only be seen in intensity and recovery; frequency may only be decreased with strict management. Adjustments should be made if a 50% improvement is not seen at each recheck.

Canine aggression toward humans and other dogs is a common behavior complaint that can be treated with appropriate management strategies, anxiolytic products and medication, and behavior modification.