Canine Aggression in a Multidog Household 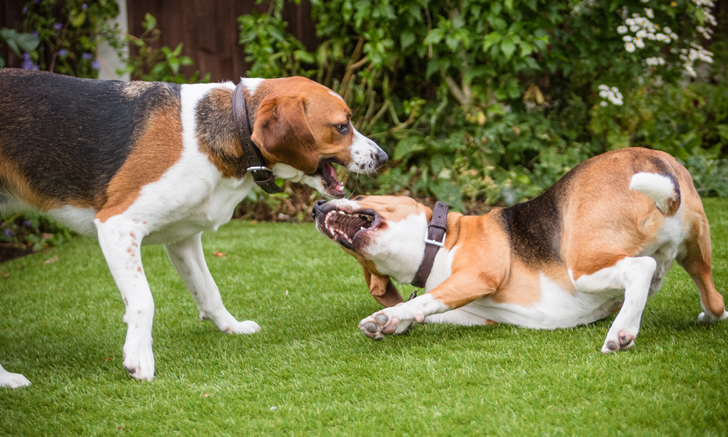 Bella, a 4-year-old, 68-lb (31-kg) spayed crossbreed dog was presented following multiple fights with her housemate Prince, an 8-year-old, 62-lb (28-kg) neutered male crossbreed dog. Bella was introduced to the home 2 years prior, and fights between the dogs initially occurred 2 to 3 times each year. Triggers initiating aggressive behaviors included rawhide treats being offered to both dogs, visitors arriving at the door, and the dogs being in close proximity in confined spaces (eg, living room, staircase). The frequency and intensity of fights had increased to approximately twice weekly in the 3 months prior to presentation. In addition to the previous triggers, recent fights occurred abruptly, and the pet owner was unable to identify specific triggers in some cases. Bella typically initiated the fights, and both dogs had extensive injuries, including puncture wounds and full-thickness lacerations. The owner had also been bitten when attempting to break up the fights, which sometimes lasted several minutes until the dogs were physically separated.

Following the most recent and injurious fight one month prior to presentation, Prince had become fearful and avoidant of Bella and occasionally growled when she approached. In these instances, or when the owner observed Bella staring and moving toward Prince, the owner discouraged Bella’s behavior and commanded her to “come.” This verbal reprimand usually interrupted Bella’s advance. When the owner was not home, the dogs were confined to separate, uncovered crates next to each other in the garage.

Both dogs had healing wounds and scarring from past fights; physical examination was otherwise unremarkable.

CBC, serum chemistry profile, total thyroid level, and urinalysis had been performed on both dogs 4 months earlier during their annual wellness visits; results were unremarkable. Abbreviated CBC and serum chemistry profile results obtained during an emergency visit one month prior to the current presentation were within normal limits for both dogs.

To observe their social dynamics, behavior of both dogs was observed at the clinic and via video recordings taken by the owner in the home. The dogs were transported to the clinic in separate crates and observed on a walk together. They ignored each other, and neither dog exhibited signs of fear or tension. Once indoors, they were tethered to wall-mounted clips on opposite sides of the examination room (no closer than 10 ft) for safety. Both dogs generally ignored one another, and no signs of aggression or fear were observed in the clinic.

In the owner-provided videos (see Videos) of the dogs’ interactions at home, Bella stood stiffly and stared at Prince, blocking his path when he tried to move. Prince exhibited signs of fear (eg, pinning ears back, avoiding eye contact, licking his lips) during these interactions.

BELLA & PRINCE: REDIRECTED AGGRESSION TOWARD OWNER WHEN INTERCEDING IN FIGHTS

Bella exhibited resource guarding of rawhide bones. Excitement and physical proximity also triggered aggression toward her housemate. ISA was identified as the most likely cause of Bella’s aggression due to the causative situations and patient signalment and history. Prince consequently developed fearful and fear-aggressive behavior toward Bella, as demonstrated by his fearful body language, avoidant behavior, and recent onset of growling when Bella approached. Both dogs had redirected aggression toward the owner during attempts to break up fights.

When treating canine aggression, safety of household inhabitants is the primary concern. The risk for injury is higher for children, the elderly, and those with physical or mental health issues.

Complete physical separation of Bella and Prince (ie, confining them in separate areas of the house and yard) was essential because of the serious injury they caused each other and the owner. Baby gates were also strategically installed as secondary barriers in case doors between rooms were accidentally left open. Because both dogs were previously crate trained, they were allowed to sleep overnight in separate crates in the owner’s bedroom. The crates were covered so the dogs could not see each other. The dogs were also separated when the owner was not home or could not directly observe and manage interactions.

Positive reinforcement techniques with cues that might help the behavior modification process were used. Both dogs were taught to go to their own bed on cue (ie, the “place” command) and stay there until released. Once each dog learned to stay on the bed when instructed, environmental distractions (eg, the doorbell) were gradually introduced, and calm behavior was reinforced in situations that previously triggered fights.

Both dogs also underwent desensitization (ie, systematic, stepwise reintroduction of a trigger in an attenuated version that does not provoke the undesirable behavior; intensity of the trigger is gradually increased until the undesired behavior is never fully elicited), counterconditioning (ie, dog is rewarded for calm behavior or a positive response to the attenuated trigger), and countercommanding (ie, dog is rewarded for performing a cue or alternative behavior [eg, “place,” “stay”] in the presence of the attenuated trigger) to the sight, and eventually movement, of the other dog. This training initially occurred at a distance, then gradually in closer proximity, until both dogs were able to remain calm while tethered apart in the same room.

Both dogs were also trained to wear basket muzzles. Eyebolts were also installed on opposite ends of the living room so Bella and Prince could be securely tethered at a safe distance (ie, 20 ft apart in this case) after they were trained to remain relaxed in each other’s presence.

The dogs were eventually allowed untethered, supervised time in the house while wearing basket muzzles and dragging lightweight leashes (to facilitate separation in case of a fight). The owner was counseled to closely observe body language for early signs of tension, aggression, and/or fear, in which case the owner was instructed to separate the dogs and refocus attention on the owner. Positive reinforcement training, including practicing the “place” and “stay” commands with various distractions and in real-life situations, was continued. Although the dogs were to be muzzled and leashed to avoid injuries, it was acknowledged that they might be loose occasionally without muzzles and leashes due to human error. It was advised that a citronella spray deterrent could be used to safely break up fights if needed. Dogs were to be separated immediately after a fight until both dogs were able to exhibit relaxed body language and behavior both separately and when reintroduced on opposite sides of a baby gate.

A selective serotonin reuptake inhibitor (ie, fluoxetine (1 mg/kg PO every 24 hours) was administered to both dogs to reduce anxiety and impulsivity underlying the anxious and aggressive behaviors. For Bella, fluoxetine was selected to reduce impulsive aggressive behavior (ie, quick escalation with relatively minor provocation). The anxiolytic effect of fluoxetine was used in Prince to address fearful and anxious behavior.

The owner was warned that prognoses were guarded based on signalment and prior history and because past fights had resulted in marked injury and were not always predictable. Although the frequency and severity of fights would decrease with treatment, it was likely that one or more fights would still occur if the dogs were together.

The owner agreed to the treatment plan, and physical separation and treatment with fluoxetine were initiated the next day. Within 2 weeks, the owner noted decreased anxiety, reactivity, and hypervigilance in both dogs. It was unknown whether separation, avoidance of triggering events, and/or medication were primarily responsible for this early improvement. After implementing the training and behavior modification recommendations, neither dog appeared tense in the presence of the other when tethered in the living room or on opposite sides of the baby gates.

After 6 months, no additional fights had occurred, and the owner felt Bella and Prince’s behavior had improved. To reduce the risk for injury, the owner chose to keep the dogs physically separated or muzzled when together, rather than attempting to reintroduce the dogs without wearing basket muzzles. Positive reinforcement training was continued.

Because behavior was well-managed and the owner was fearful fighting would reoccur, the owner elected to maintain both dogs on fluoxetine indefinitely. Annual diagnostic wellness screening tests (ie, physical examination, CBC, serum chemistry profile, urinalysis) for both dogs were recommended for psychopharmaceutical medication monitoring.

Unlike other forms of canine aggression, with ISA, females are either as likely or more likely to be the aggressor as compared with males.1-3 In a recent study, the aggressor was often younger than and entered the household after the recipient.3 Based on owner reports, situations that commonly trigger fights include resource guarding, arousal and excitement, owner proximity and attention, and confined spaces.3 In ≈14% of cases, the trigger was unknown. Approximately 62% of the fighting dog pairs did not need long-term separation following treatment, ≈13% required at least intermittent separation and/or muzzling, and ≈25% necessitated complete separation.3

The goal of treatment is to ensure safety through avoidance of causative situations and management of behavior via positive reinforcement training. Pharmaceutical medications (eg, fluoxetine, 0.5-2 mg/kg PO every 24 hours4) can be helpful in reducing anxiety or impulsivity if aggression is abnormal,1,2 but the decision to use medication should be made on a case-by-case basis, noting that drugs treat the underlying motivation that leads to aggression, not the clinical sign of aggression.

In some cases, both the aggressor and recipient dog can benefit from medication. For example, impulsive social aggression in the aggressor might be treated with fluoxetine, but the recipient, that is fear-aggressive and has difficulty calming, may benefit from clomipramine, which reduces reuptake of serotonin and norepinephrine. Rapid-onset adjunctive medications such as trazodone (3-5 mg/kg PO)5 and clonidine (0.01-0.05 mg/kg PO) may be situationally administered ≈2 hours prior to stressful events (eg, confinement, separation, reinstruction) during training or adjunctively administered every 12 hours. Informed owner consent must be obtained, as psychopharmaceutical medications to treat aggression are extra-label.

Prognosis depends on whether the inciting causes can be identified and easily managed. Prognosis is good when triggering situations are predictable and easily avoided (eg, bones are no longer given). Prognosis is guarded to poor when inciting factors are difficult to avoid (eg, dogs walking through a hallway together) or cannot be identified and eliminated. Factors associated with a poor prognosis include fights between same-sex pairs (particularly female–female), bites that break the skin, and aggression triggered by the sight of a dog in the same household.3 As risk cannot be entirely eliminated, some degree of lifelong management may be necessary, and owner education and discussion regarding prognosis is warranted.