Scott Fritz, DVM, is a resident in toxicology at Kansas State University. Dr. Fritz earned his DVM from Iowa State University and is involved in several monitoring and mitigation programs with the goal of predicting and effectively preventing harmful algal blooms from recreational and animal drinking waters. His interests include food animal toxicology and blue-green algae. 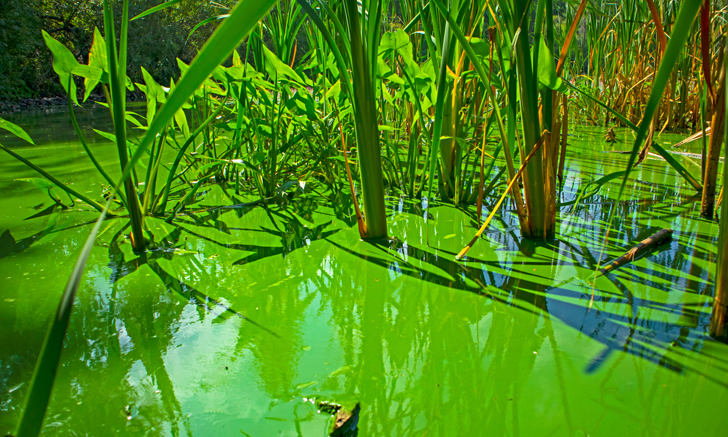 Cyanotoxins are produced by cyanobacteria (ie, blue-green algae), which are harmful algal blooms, and are highly potent biotoxins that pose a risk to humans, domestic animals, and wildlife; cases of animal exposure occur worldwide and are increasingly prevalent.1,2

Microcystins are cyclic heptapeptides that inhibit serine threonine protein phosphatases and lead to reorganization of hepatocyte infrastructure and eventual hepatocyte apoptosis.3,4 Microcystins are transported into cells by organic anion transport proteins, which are highly expressed in hepatocytes in relation to other cell types.5,6 Increased production of necessary transport proteins in hepatocytes can explain the propensity for microcystins to target the liver following ingestion; this could also be because the liver is the first organ exposed to ingested toxins absorbed from the GI tract. There are reports of microcystin intoxication causing lesions in the kidney.7,8

Anatoxin-a is a bicyclic amine alkaloid that is a potent acetylcholine-receptor agonist and exhibits greater affinity for nicotinic receptors than for muscarinic receptors.2,9 Anatoxin-a(s) is a guanidine methyl phosphate ester that is a naturally occurring organophosphate and potent inhibitor of acetylcholinesterase.10,11

Although predicting the occurrence of algal blooms can be challenging, common environmental conditions exist, including warm (>70°F [21°C]), stagnant waters with some mechanism of nutrient accumulation. Nitrogen and phosphorus are the main nutrients implicated in eutrophication (ie, abnormal accumulation of nutrients, commonly due to surface runoff), which leads to harmful algal blooms that often appear as a thick scum, similar to paint, on the surface of a body of water.12 Nitrogen and phosphorus can enter bodies of water from many sources (eg, fossil fuel combustion; stormwater discharge; groundwater pollution; agricultural and residential fertilizers; urban, industrial, and agricultural waste).13 Cyanotoxin poisonings typically occur in late summer or early fall, as water temperatures rise and rainfall tapers off.

Patients with cyanotoxin poisoning have an acute onset of clinical signs following exposure to a suspect water source and are often in critical condition or deceased when presented to the clinic. Patients with microcystin poisoning show clinical signs within hours of exposure, and death can occur within 24 hours. Patients with anatoxin-a/anatoxin-a(s) poisoning show almost immediate clinical signs, and death can occur <1 hour after exposure. Algal blooms often produce odors attractive to dogs, leading them to play in the water and ingest the algae-created surface scum; this behavior may play a role in the susceptibility of dogs to cyanotoxin poisoning.14

Clinical signs related to microcystin exposure initially reflect GI insult, particularly vomiting, abdominal pain, and bloody diarrhea. The severity of clinical signs worsens with liver damage and developing coagulopathy. Lethargy, weakness, pallor, seizures, and death can follow. Patients that do not succumb to initial GI and acute liver toxic insult may have chronically impaired liver function. The amount of microcystins ingested and the patient’s ability to metabolize microcystins (via glutathione-S-transferase pathway) are the most important factors impacting the severity of clinical signs and the degree to which the patient is affected.15

Differential diagnoses for anatoxin-a/anatoxin-a(s) poisoning include poisoning by organophosphate and/or carbamate insecticides, pyrethrins, and chlorinated hydrocarbons and should be considered in patients presented with acute CNS and peripheral nervous system signs, especially after being outdoors.

Diagnosis of cyanotoxin poisoning in a clinical setting should be based on clinical signs and exposure. Identification of algae in suspected ingested water or stomach contents/vomitus is suggestive of poisoning. Presence of toxins in the stomach contents is considered confirmatory. Tissue analysis can be difficult; however, some laboratories possess this capability, and clinicians are urged to contact their diagnostic laboratory for a referral. Many public health departments use an ELISA kit to detect microcystins in water samples. Recent literature suggests that the most practical sample to confirm microcystin exposure in a patient is antemortem testing of urine15; however, improvements are needed for this method to become practical for point-of-care use. Clinical pathologic findings associated with microcystin poisoning include but are not limited to thrombocytopenia, hypoglycemia, hyperbilirubinemia, increased ALT, and increased prothrombin and partial thromboplastin times.15 Confirmatory testing of tissue collected postmortem and histopathologic evaluation are often used for definitive diagnosis. Acute, severe, massive, hepatocellular necrosis is the main histopathologic finding associated with microcystin poisoning.15

Anatoxin-a poisoning is associated with rapid death, which limits pathologic assessment because often there are no lesions present or lesions are nonspecific.16 Stomach content or vomitus samples have the greatest diagnostic value and can be analyzed via liquid chromatography/tandem mass spectrometry to confirm exposure.16 However, this assay is not routinely offered. Anatoxin-a(s) does not cross the blood–brain barrier, so inhibition of blood acetylcholinesterase but not brain acetylcholinesterase may be supportive of anatoxin-a(s) exposure.17

Because there is no known antidote for cyanotoxin poisoning, treatment should be aimed at clinical signs. Cyanotoxins are rapidly absorbed from the GI tract, and decontamination is likely to have little benefit when the patient shows clinical signs. For patients with microcystin poisoning, IV fluid therapy, fresh frozen plasma, liver protectants, Vitamins E and K, gastroprotectants, antibiotics, and cholestyramine have all been used in combination with varying degrees of success. This is likely relative to the magnitude of exposure. Current therapy recommendations include cholestyramine,18,19 IV fluids to replace volume and correct electrolyte abnormalities, glucose supplementation to address hypoglycemia, antiemetics to control vomiting, and antibiotics (if indicated by culture and susceptibility testing), to prevent secondary infections. Treatment should be aimed at combating hypovolemic shock and hemorrhage. Whole-blood transfusions may be necessary in severe cases.

Patients with anatoxin-a or anatoxin-a(s) exposure have such an acute and severe clinical presentation that treatment is often not possible prior to death. Respiratory support has been suggested but is not antidotal and likely only delays death. Anticonvulsants and methocarbamol have been used in cases of anatoxin-a poisoning, but treatment is often unsuccessful. Atropine may reduce clinical signs associated with anatoxin-a(s) poisoning, and although physostigmine and pralidoxime have been suggested for treatment, they do not appear to be of value after exposure.10 Because cyanotoxins have clinically steep dose-response curves, once clinical signs are observed it is likely that a sufficient amount of toxin has been absorbed to cause death.

Prognosis is grave for almost every patient, as morbidity and mortality are high for patients with confirmed exposure. There have been reports of successful intervention for microcystin poisoning in which exposure was relatively small and treatment was initiated quickly.20 Even for patients with initial recovery from microcystin poisoning, prognosis should remain guarded due to complications relating to hepatic insufficiency. Follow-up examination in recovered patients should include monitoring liver enzymes and, potentially, coagulation parameters. Survival after anatoxin-a or anatoxin-a(s) exposure is rare and little is known about potential long-term complications.

Prevention of exposure is the most effective means of preventing clinical illness associated with harmful algal blooms. Cyanobacteria algal blooms are increasingly prevalent and likely to continue to cause illness.21 State agencies are aware of the risks these blooms pose and many have monitoring programs for recreational waters. There is ongoing research on preventive and mitigation techniques but there are no current effective economic solutions. More research is needed to accurately predict conditions contributing to algal bloom development.