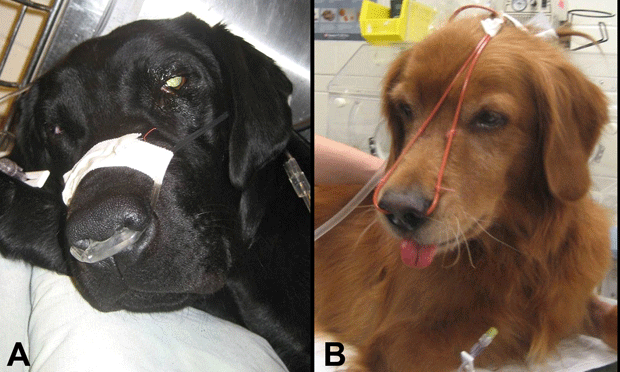 Acute respiratory distress can be broadly divided into 8 categories based on anatomic localization. Several of these can be distinguished by simple observation and physical examination, whereas others require additional diagnostics.

Initial assessment of these patients involves observation of the patient’s mentation, posture, and respiratory rate and effort, as well as auscultation of the thorax. Evaluation of the mucous membranes may reveal cyanosis, suggestive of hypoxemia.

Prompt recognition of the underlying reason for respiratory distress is essential to providing appropriate therapy.

Anemic animals may have pale mucous membranes, and cyanosis may not be apparent, even with severe hypoxemia. The pattern of respiration can help localize the problem and guide further diagnostics and treatments.

Categorical causes of hypoxemia include:

Figure 1: Right lateral (A) and ventrodorsal (B) radiographic projections of the thorax of a dog presenting with acute respiratory distress. An alveolar lung pattern is present in the right cranial, middle, and caudal lung lobes, a pattern consistent with aspiration pneumonia. Megaesophagus is present (black arrows), likely leading to chronic regurgitation and secondary aspiration.

Thoracic wall disorders (eg, flail chest, “sucking” chest wounds) can lead to paradoxical respiration with the affected area of the thorax collapsing inward on inspiration and forced outward on expiration.

Pleural space disorders, such as pleural effusion or pneumothorax, can lead to rapid, shallow breathing patterns with inspiratory distress.

Pulmonary parenchymal disorders, such as pneumonia (Figure 1), edema (cardiogenic or noncardiogenic), pulmonary contusions, interstitial lung disease, and neoplastic or fungal infiltration (Figure 2), can lead to both inspiratory and expiratory difficulty. The presence of heart murmurs, gallops, or arrhythmias may suggest underlying heart disease but not necessarily congestive heart failure.

Severe abdominal distension can impair diaphragmatic contraction, leading to inspiratory distress that is typically characterized by a slow and exaggerated pattern. Differentials include ascites, gastric dilatation-volvulus, organomegaly, and pregnancy.

Figure 2: Right lateral (A) and ventrodorsal (B) radiographic projections of the thorax of a dog presenting for progressive coughing and acute dyspnea. A diffuse structured interstitial lung pattern is present. Primary differentials would include metastatic neoplasia and fungal disease.

Oxygen supplementation is the cornerstone therapy for the dyspneic patient and is often needed prior to performing a physical examination or diagnostic procedures (Figure 3, see above as article primary image). Several strategies may be used for providing oxygen, with the patient’s temperament dictating the most appropriate method.

The clinician should ensure the airways are patent; otherwise more invasive measures may be indicated (eg, intubation, tracheostomy, mechanical ventilation). In some cases, sedation may be warranted to reduce anxiety associated with respiratory distress. Vascular access should be obtained, if possible, without disrupting oxygen supplementation to allow intravenous administration of medications or fluids if indicated.

Figure 3: Oxygen therapy is the mainstay of treatment for acute respiratory distress and can be provided using a variety of methods. Oxygen cages are the least stressful for the patient but can limit access for further treatments and diagnostic procedures. Intranasal administration of oxygen can be supplied using a nasal prong (A) or red rubber catheters (B) and can provide a FiO2 of 40% to 50% when using 50 to 100 mL/kg per minute of oxygen flow. Face mask and flow-by oxygen can also be used if the patient will tolerate it.

Oxygen supplementation is the cornerstone therapy for the dyspneic patient.

Initial diagnostics may include:

Once the patient has been stabilized, additional diagnostics dependent on the clinical situation may include:

Specific treatment is targeted to the underlying cause of respiratory distress. Continued oxygen supplementation and preventing stress is vital to avoid further decompensation.

Specific treatment is targeted to the underlying cause of respiratory distress.

Pulmonary Parenchymal Disorders
Thoracic radiographs are required for definitive diagnosis and treatment. However, empirical therapy may be necessary initially in extremely unstable patients.