The prognosis for dogs diagnosed with primary pulmonary tumors depends on multiple factors, including clinical signs, tumor-specific factors (eg, size, histologic subtype, grade), and clinical stage.1-4 Metastasis often occurs through the lymphatics because most lung tumors are derived from epithelial tissue; however, vascular and intra-airway spread has also been reported.2,4 Historically, lymph node metastasis has been highly associated with a significantly shorter survival,1-4 often prompting costly adjunctive treatment that may result in morbidity. Previous reports have suggested a survival of only 26 to 131 days in dogs with lymph node metastasis.1-3,5

In this contemporary retrospective study, records from 98 dogs that underwent surgery for a primary lung tumor were reviewed. Of these, 40 dogs with lymph node biopsy were also included. As this was a retrospective study, adjuvant treatments were not controlled. Multiple forms of maximally tolerated dose chemotherapy, metronomic chemotherapy, and other drugs were administered.

Of the dogs that underwent lymph node biopsy, 11 (27.5%) had metastasis to the lymph node. In univariate and multivariate analysis, presence of lymph node metastasis, administration of adjuvant chemotherapy, and mitotic index did not reach statistical significance. However, these data should be interpreted with caution due to the retrospective nature of the study and low numbers of cases in several categories. Similar to previous reports, the size of the primary tumor was negatively associated with survival; patients with a larger tumor had a significantly shorter survival time.

Lymph node metastasis was identified via surgical histopathology in some dogs that had radiologically normal lymph nodes per CT imaging. This highlights the importance of surgical lymph node extirpation when possible, despite anatomy being occasionally challenging and regardless of the preoperative imaging findings. Additional research regarding the long-term impact of lymph node metastasis in dogs with primary lung tumors is warranted. 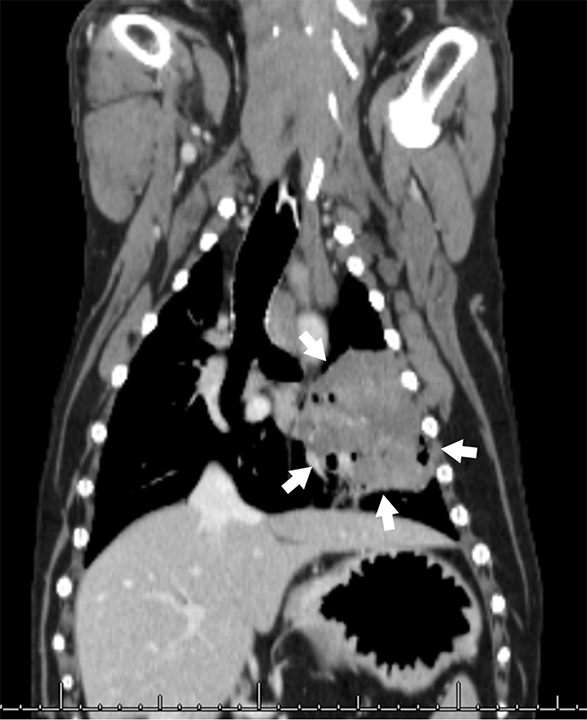 FIGURE 1 Dorsal reformatting of a contrast-enhanced CT scan in the soft tissue of a patient with a primary lung tumor. A large (>6 cm in diameter) primary lung carcinoma (arrows) causing lateral deviation of the mainstem bronchi can be seen.

FIGURE 1 Dorsal reformatting of a contrast-enhanced CT scan in the soft tissue of a patient with a primary lung tumor. A large (>6 cm in diameter) primary lung carcinoma (arrows) causing lateral deviation of the mainstem bronchi can be seen. 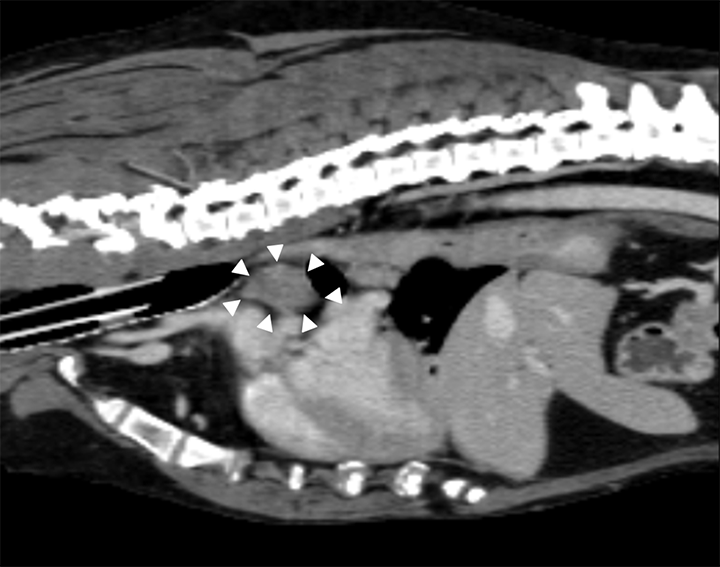 The size of the primary lung tumor significantly impacts survival; patients with smaller tumors have a prolonged median survival time.

Lymph node extirpation should be performed during surgery when possible, despite the occasional challenges with anatomy and regardless of the preoperative imaging findings.