Timothy M. Fan, DVM, PhD, DACVIM (Oncology), is the principal investigator of the Comparative Oncology Research Laboratory at University of Illinois at Urbana-Champaign, where he also earned his PhD in tumor immunology. He earned his DVM from Virginia-Maryland College of Veterinary Medicine in Blacksburg, Virginia, completed a small animal rotating internship at University of Illinois, and completed a small animal internal medicine residency at Cornell University. Dr. Fan’s interests include rapidly investigating and translating novel treatment strategies in dogs with spontaneously arising cancers and conducting meaningful comparative oncology research to aid in treating cancer in companion animals and humans.

The spleen is an accessory organ responsible for physiologic functions that include extramedullary hematopoiesis and immune activities.1,2 Because the spleen is highly cellular and vascular in nature, it can be predisposed to anatomic anomalies, including the development of proliferative mass effects. Splenic masses can remain physically undetectable and clinically inconsequential in some patients; however, in a subset of affected dogs, rupture of an occult splenic mass can manifest as a spontaneous and life-threatening hemoabdomen.

HSA is a malignant neoplasm that originates from either vascular endothelium or hemangioblast lineage. The spleen remains the most common anatomic site of primary HSA development and has been reported to be the most common cause of spontaneous hemoabdomen associated with splenic mass rupture.5-7 However, these studies have been retrospective and are prone to bias that can influence reported results.8 Although splenic HSA is commonly considered a primary differential in dogs presented with a splenic mass and hemoabdomen, this assumed diagnosis can negatively influence owner decisions to pursue potentially life-saving interventions. There is significant justification for improving presurgical accuracy in the identification of dogs actually afflicted with HSA as the underlying pathology of hemoabdomen.9 In addition, prospective studies less prone to bias are needed to help form the foundational knowledge base used to guide owner decisions when the likely outcome of dogs with splenic mass and hemoabdomen is prognosticated.

This report* describes the findings derived from a prospective, observational study of 40 dogs with splenic mass rupture and spontaneous hemoabdomen presented for emergent care. Of these 40 dogs, 15 had benign masses and 25 had malignant masses. Twenty-four of the malignant splenic masses were confirmed to be HSA and, therefore, accounted for the majority (60%) of pathologies. Of 9 dogs with hepatic nodules identified via ultrasound, surgical biopsy or resection of the liver nodules confirmed metastatic HSA lesions in only 3 dogs (33%). Immediate surgical outcomes were favorable, with 95% of dogs surviving to discharge. Collectively, although 60% of splenic masses were HSA, this percentage trends lower than what has been reported in previous retrospective studies (63.3%-70.4%)5,6 and may suggest a more favorable outcome in dogs with splenic tumor rupture that could guide owner’s decision-making during emergent situations. 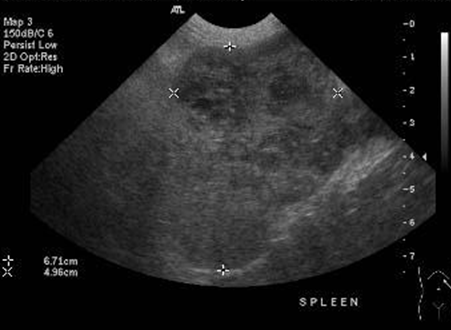 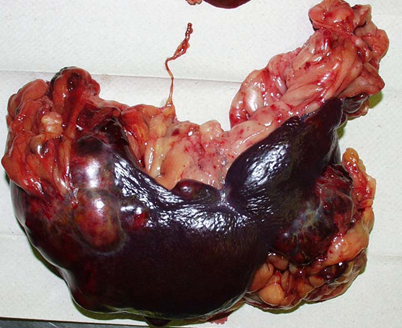 *This study was funded by Ethos Discovery.

Intraoperative and postoperative survival of dogs presented with splenic mass and associated hemoabdomen is high (≈95%) when appropriate and timely interventions are instituted.

Ultrasonographic identification of liver nodules in dogs presented for splenic mass and hemoabdomen should not be assumed to represent metastatic disease.

HSA should be considered the primary differential for splenic mass associated with hemoabdomen, but there is a significant percentage (≈40%) of dogs that may be cured if timely life-saving therapies (ie, surgical intervention with hemodynamic support) are instituted.