What do I need to know about laboratory measurement and reporting when diagnosing and treating chronic kidney disease? 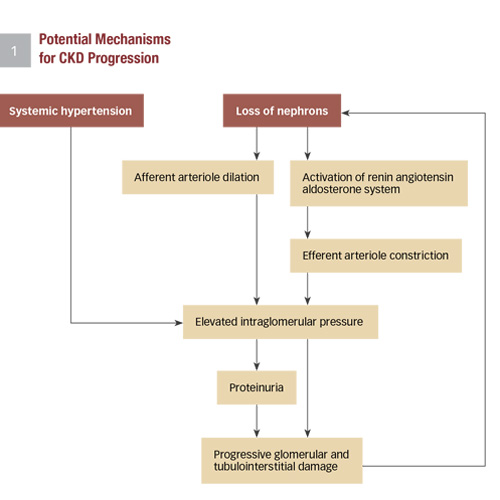 Nephron damage associated with CKD is usually irreversible and often progressive. Progressive loss of renal function in dogs tends to be common, linear, and relatively rapid compared with cats. Cats may have stable renal function for months to years and be relatively unaffected by CKD or may have slowly progressive disease over several years; stable cats may also experience an abrupt, unpredictable decline in renal function. Soft tissue mineralization, systemic hypertension, intraglomerular hypertension, and proteinuria have been associated with progression of CKD (Figure 1). Although it is not usually possible to improve renal function in CKD, it is logical to assume that early diagnosis can improve clinical outcomes. There is firm evidence for dietary treatment and increasing evidence that anti-proteinuric treatments can slow the progressive nature of CKD. 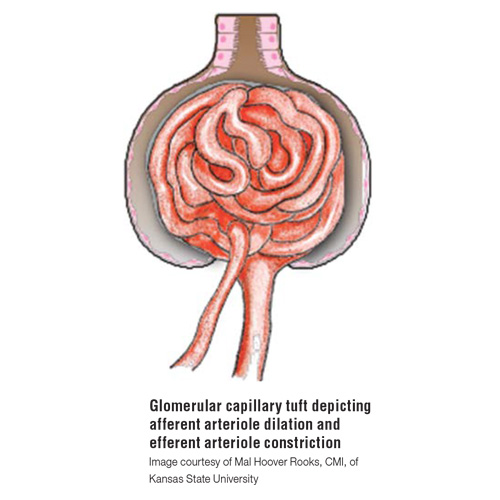 Early nonazotemic CKD (International Renal Interest Society [IRIS] Stage 1) (Table 1A & 1B) can be diagnosed in dogs and cats with abnormal renal palpation or renal imaging findings, persistent renal proteinuria, or urine concentrating deficits. CKD is usually diagnosed based on persistent azotemia superimposed on an inability to form hypersthenuric urine. (Some cats with CKD retain the ability to concentrate urine.) Serum creatinine concentrations are used as a marker of glomerular filtration rate (GFR). Creatinine is produced from the nonenzymatic degradation of creatine and creatine phosphate in skeletal muscle; therefore, serum creatinine concentrations reflect muscle mass as well as GFR.

The current recommendation is to treat persistent proteinuria of renal origin with a renal diet (reduced dietary protein, phosphorus, and sodium, supplemented with N-3 fatty acids and alkalizing agents) and an angiotensin-converting enzyme (ACE) inhibitor. Borderline proteinuria warrants increased monitoring via the UP/C ratio. Note that borderline and even normal levels of proteinuria in cats have been associated with poor outcomes.

For example, in cats with naturally occurring CKD, relatively mild proteinuria (UP/C 0.2–0.4) increased the risk for death or euthanasia 2.9-fold compared with cats with UP/Cs <0.2.13 In a study of nonazotemic cats older than 9 years with CKD, 95 cats (median age 13) were followed for 12 months or until death or azotemia developed. Azotemia was defined as a serum creatinine concentration >2.0 mg/dL; 29/95 (30.5%) cats developed azotemia. Proteinuria at presentation (median UP/C of 0.19 vs 0.14) was significantly associated with development of azotemia in these geriatric cats.14 Finally, when 112 client-owned cats with stable CKD were compared with 101 client-owned cats with progressive CKD, median UP/Cs in the progressive group were higher than the stable group (0.27 vs 0.14).15 A 0.1 increase in UP/C was associated with a 24% increase in risk of CKD progression.15 It should be noted that overlap of UP/C values was present in these studies, and therefore clinical relevance in individual cats may be difficult to determine. Nonetheless, proteinuria is an important risk factor for the development of azotemia in cats and the progression of CKD in dogs and cats and should be monitored closely.

In a recent study, 45 dogs with naturally occurring CKD were divided into 3 groups based on initial systolic blood pressure and were followed for up to 2 years. The groups were defined as: high (161–201 mm Hg), n = 14; intermediate (144–160 mm Hg), n = 15; and low (107–143 mm Hg), n = 16. The initial high-systolic blood pressure group had increased risk of uremic crisis and death compared with the low-pressure group (median survival <200 days vs >400 days, respectively).17 In cats with a remnant kidney-wrap model of CKD, systolic hypertension (mean pressure of 168 mm Hg) was associated with reduced GFR (1.34 vs 3.55 mL/min/kg), increased UP/C (1.2 vs 0.1), and increased glomerulosclerosis.18 Similarly, in dogs with the remnant kidney-wrap model of CKD, systolic hypertension (>160 mm Hg) was associated with reduced GFR, increased UP/Cs, and increased mesangial matrix accumulation, tubular lesions, fibrosis, and cellular infiltrates.19 Cats with progressive CKD had higher systolic blood pressures than did cats with stable CKD (155 mm Hg vs 147 mm Hg).15 Finally, in 69 cats with naturally occurring CKD, high time-averaged systolic blood pressure (159 mm Hg vs 136 mm Hg) was correlated with glomerulosclerosis and hyperplastic arteriolosclerosis.20

Closer monitoring of serum creatinine and UP/C may facilitate early diagnosis of CKD in dogs and cats. Longitudinal assessment of these parameters provides better data than one-time evaluations. No laboratory test is perfect; trending laboratory data using the same test methodology tends to improve diagnostic sensitivity. Once CKD has been diagnosed, standard of care renoprotective treatment includes a renal diet, potentially in combination with one or more enteric phosphate binders for hyperphosphatemia, ACE inhibitors, or calcium channel blockers for proteinuria and hypertension. Tighter control of hyperphosphatemia, renal proteinuria, and systolic hypertension may improve treatment outcome.

GREGORY F. GRAUER, DVM, MS, DACVIM, is professor and Jarvis chair of medicine in the clinical sciences department at Kansas State University. His area of interest, research, and teaching is the small animal urinary system, a topic he lectures about at the NAVC Conference. He has served as professor and section chief of small animal medicine at Colorado State University and faculty member at University of Wisconsin–Madison, where he completed his internship and residency and earned his master’s. Dr. Grauer is a graduate of Iowa State University.

*Dr. Grauer has research projects funded by IDEXX and has been paid by IDEXX to attend meetings as a key opinion leader in his field.