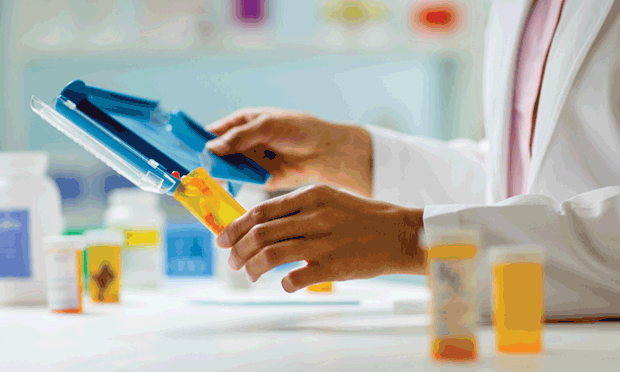 You have asked...What are some of the common drug interactions in polypharmacy?

Numerous human drug interactions can occur during absorption, at the target site, or during hepatic or renal elimination, and may lead to loss of efficacy or increased toxicity.1 Many of these interactions are likely to occur in dogs and cats as well (see Drug Interactions in Humans That May Affect Dogs & Cats), although relatively few veterinary studies have been conducted. Several key veterinary drugs have high interaction potential.

Cimetidine
Cimetidine, a histamine (H2)-blocker, is a potent inhibitor of several families of cytochrome P450 enzymes and can also inhibit transporter pumps and decrease the renal excretion of some drugs, including clearance of many drugs, such as theophylline, lidocaine, midazolam, and propranolol.2

Because of many potential cimetidine interactions, alternative H2-blockers such as famotidine, nizatidine, or ranitidine (not a clinically significant P450 inhibitor at therapeutic concentrations in humans)3 should be chosen instead. Ranitidine and nizatidine have the added advantage of prokinetic effects, which may counteract gastric atony in clinically ill patients.

Sucralfate and other aluminum-containing drugs also inhibit the absorption of tetracycline, theophylline, and digoxin.6 These physicochemical interactions can also occur in dogs and cats. Because coordinating dosing at home can be difficult, sucralfate should not be used for outpatients being administered oral drugs. The exception is H2-blockers, for which sucralfate slows but does not decrease the extent of absorption. In humans, sucralfate and H2-blockers are given simultaneously without loss of efficacy6; this may apply to dogs and cats with suspected or documented gastric ulceration.

Ketoconazole
Ketoconazole, an antifungal, inhibits a specific cytochrome P450 enzyme family (CYP3A) that has a wide substrate range and high potential for drug–drug interactions in humans, dogs, and cats. Ketoconazole inhibits P-glycoprotein, the important drug efflux transporter in the GI tract, kidney(s), biliary tree, and brain. Therefore, ketoconazole can decrease the bioavailability and/or clearance of many drugs.

Ketoconazole also doubles ivermectin exposure (based on area under the curve) in dogs.8 Neurologic toxicity has not been reported but could occur if ketoconazole was combined with high doses of ivermectin (eg, in treating sarcoptic mange) or given to P-glycoprotein–deficient (ABCB1 deletion) breeds.

Fluoroquinolones
Fluoroquinolone antibiotics inhibit the clearance of theophylline. This has led to theophylline toxicosis in humans and is attributed to inhibition of the cytochrome P450 enzyme CYP1A2. In dogs, enrofloxacin can lead to 30% to 50% higher plasma theophylline concentrations,10 and marbofloxacin at 5 mg/kg can increase theophylline exposure by about 28%.11

Omeprazole
Omeprazole, a proton-pump inhibitor, inhibits some cytochrome P450 enzymes in humans (primarily CYP2C19) and may inhibit the clearance of some drugs, including diazepam, midazolam, warfarin, and carbamazepine. Omeprazole also impairs conversion of clopidogrel, an antiplatelet agent, to its active metabolite in humans, leading to decreased antiplatelet efficacy and increased risk for ischemic cardiac events.12 Omeprazole may also lead to digoxin toxicosis, possibly via inhibition of P-glycoprotein efflux of digoxin.13

As a potent inhibitor of gastric acid secretion, all proton pump blockers can decrease the absorption of compounds that require an acidic pH for optimal absorption, including iron supplements, oral zinc, ketoconazole, and itraconazole. This same interaction also applies to H2-blockers (eg, famotidine). Discontinuing antacids when ketoconazole or itraconazole is being given may be wise. Alternatively, if antacids cannot be discontinued, fluconazole can be considered if indicated, as fluconazole absorption is not affected by changes in gastric pH.14,15

Clomipramine
Clomipramine, a tricyclic antidepressant, inhibits both norepinephrine and serotonin reuptake. Clomipramine can lead to serotonin accumulation and serotonin syndrome (clinically seen as twitching, tremor, tachycardia, myoclonic movements, and hyperthermia) in humans when used in combination with monoamine oxidase inhibitors (MAOIs, which decrease the breakdown of serotonin) or serotonin reuptake inhibitors, which increase synaptic serotonin concentrations. Deaths have been reported in humans given clomipramine plus MAOIs—a well-established interaction. Veterinary MAOIs include l-deprenyl (selegiline) and amitraz.

Other drugs that affect serotonin include tramadol and dextromethorphan (both of which inhibit serotonin reuptake). However, the interaction potential with these weaker serotonergic drugs appears much lower in humans.

Closing Remarks
Based on what is known for human patients, these drugs pose reasonable risk for adverse drug interactions in dogs and cats. The accompanying drug history should be reviewed carefully when these drugs are administered. Veterinarians should obtain a complete and updated drug history at each office visit, but this is especially important when new drugs are being prescribed or a patient is not well.