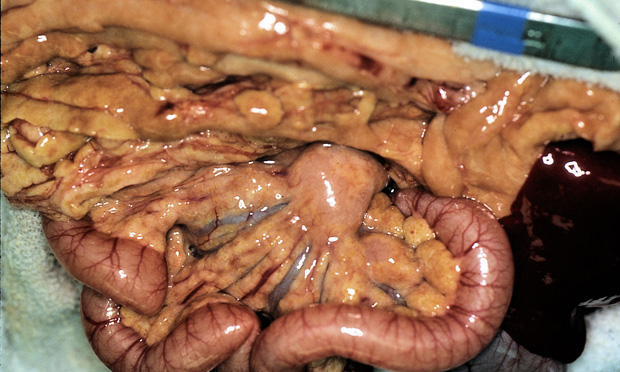 Feline pansteatitis, called yellow fat disease due to the discoloration of fat, is characterized by severe inflammation of body fat. It is associated with consumption of high levels of unsaturated fatty acids found in certain types of food (ie, tuna and other oily fish). It can also be associated with inadequate intake of vitamin E. The result is decreased antioxidant capacity with subsequent free radical peroxidation of lipids. Clinically this causes inflamed body fat; the inflammation may spread to fat located in the body cavities resulting in sterile exudative effusions. This condition can be diagnosed early with a simple subcutaneous fat biopsy.

The abdominal radiograph depicts the lack of fat density in pansteatitis, particularly the absence of retroperitoneal fat and a loss of fat density in the falciform, intraabdominal, and inguinal regions. The surgical image shows the fat discoloration and abnormal texture. The enlarged mesenteric lymph nodes in the image show only inflammatory change. The patient, a year-old domestic shorthair, presented with primary complaints of fever (up to 105°F), lethargy, anorexia, and extreme pain when touched anywhere along its trunk. The cat had not responded to antibiotics.