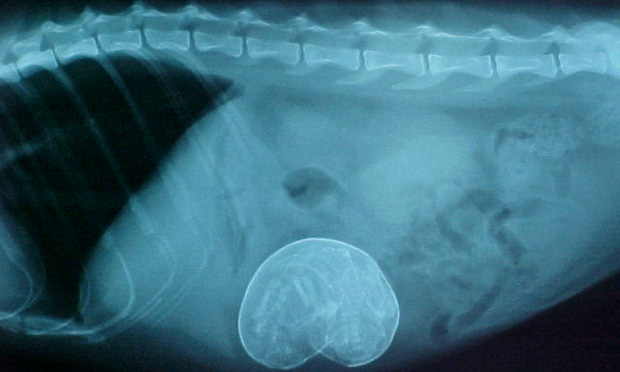 An owner reported that after a 3-week absence her adult intact female cat of unknown age reappeared in a weak, almost comatose state. The cat weighed 7.9 pounds upon presentation and was severely dehydrated. She had a large, firm, palpable mass in her mid abdomen. The significant blood abnormalities present upon admission: WBC = 49,800, HCT = 25.8%, BUN = 52, creatinine = 3.4, and glucose = 189. The FeLV/FIV test results were negative.

A lateral abdominal radiograph revealed a large calcified intraabdominal mass with a distinct calcified shell border. During exploratory surgery, the mass was exteriorized and the cat was spayed. Her right uterus and both ovaries were normal, but she had a vestigial left uterine body. When opened postoperatively, the mass contained a fairly well developed fetus attached to the lining of the shell by a connective tissue/vascular remnant. The cat recovered uneventfully and is doing very well 18 months postoperatively.