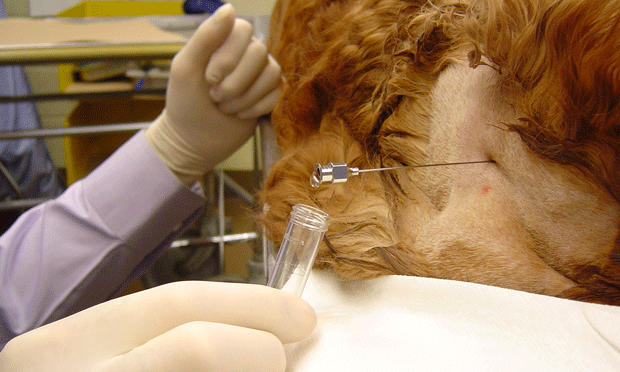 Analysis of CSF is an important diagnostic tool in veterinary medicine. It can be used to help differentiate between many diseases of the CNS, such as infectious and autoimmune meningitis, encephalitis/myelitis, and neoplasia. Analysis of CSF is indicated in any animal showing CNS signs if metabolic and toxic causes have been ruled out. To this end, it is crucial that a complete blood count, serum chemistry profile, and urinalysis and culture are obtained and interpreted before CSF is collected and analyzed. In addition, analysis for lead toxicity should be done if exposure is possible. Common metabolic causes for CNS signs in companion animals include hypoglycemia, uremia, and liver dysfunction.
Essentially, CSF is the ultrafiltrate that is produced when blood passes through the choroid plexus. Red cells, white cells, platelets, most of the proteins (immunoglobulins, albumin), and most drugs cannot pass through the choroid plexus. Therefore CSF is colorless and transparent. It is produced at a rate of 0.05 ml/min in dogs and 0.02 ml/min in cats. It circulates from the ventricular system to the subarachnoid spaces of the brain and spinal cord.

A CSF tap can be performed in any practice setting; barriers to the procedure usually include financial constraints of the client, skill and comfort level of the clinician, and the availability of in-house or laboratory personnel to analyze the sample on a timely basis. CSF can be obtained either via cerebellomedullary cisternal puncture or via lumbar puncture. The cisternal tap is technically easier to perform, but a lumbar puncture is better for the diagnosis of primary lumbar spinal cord disease. General anesthesia is required for this procedure, as it ensures limited movement of the animal and enables the clinician to manipulate the head and neck as needed. The following is a step-by-step explanation on performing a CSF tap.

What you will need

Position the patient in lateral recumbency. The nose should be flexed and the dorsum flush with the edge of the table. It is sometimes helpful to pull the ears down toward the face.
Clip an area large enough to identify landmarks. For a cisternal tap, midline landmarks are the occipital protuberance and the dorsal spinous process of the axis (C2). Lateral landmarks are the wings of the atlas. Prepare the clipped area using aseptic technique. The clinician should wear sterile gloves for this procedure.

Palpate the wings of the atlas with the thumb and middle finger and palpate the occipital protuberance with the index finger, making a triangle. The middle of the triangle should approximate the cerebellomedullary cistern.

Insert the needle in the middle of the triangle. As the needle is advanced, a "pop" will be felt as it passes through the dorsal atlantooccipital membrane (dura) and then a slight loss of resistance will occur as it enters the subarachnoid space. The "pop" may be more difficult to appreciate in cats and small dogs.

Remove the stylet, and observe for CSF flowing into the needle. If this does not occur, replace the stylet and advance the needle 1 to 2 mm at a time, each time checking for CSF flow. A technician may occlude the jugular veins to enhance CSF flow, but proceed with caution: the increase in intracranial pressure may result in clinical deterioration if the animal has a tumor or other space-occupying mass.

Collect the CSF in a glass vial or plastic test tube. EDTA tubes are generally not necessary, as CSF should not clot. One to 2.0 ml of CSF in two tubes is sufficient for analysis.

Position the patient in lateral recumbency with the dorsum flush with the table. The sternum should be elevated so that it is at the same level as the dog's vertebral column.

Landmarks for lumbar puncture include the dorsal spinous process of L6. The region should be clipped and prepared using aseptic technique.

In some very arthritic older dogs, it may be difficult to collect lumbar spinal fluid because of severe arthritic degeneration. The needle may have to be redirected several times with considerable force to overcome the friction encountered from arthritis.

Remove the stylet. If there is no CSF flow, replace the stylet and withdraw the needle a few millimeters at a time and check again for CSF flow. Jugular veins may be occluded to aid in flow. Some sources state that lumbar CSF can be aspirated with a syringe; however, we generally do not advocate this approach because it often leads to contamination of the sample with blood.

Analysis
Normal CSF should be colorless, odorless, and clear. Remember, CSF should be collected in 2 tubes. One can be sent as is to a laboratory for quantitative protein analysis; the other should be sent for cytologic evaluation. Once in a collection tube, any cells in the CSF will be destroyed in a matter of hours due to the low oncotic pressure. This can be avoided by adding 2 drops of the patient's own serum to 1 ml of CSF.

Cell counts can easily be done in any practice using a simple glass hemocytometer. It is important to count both red and white blood cells.

A cursory cytologic examination of the fluid can be done in any clinical setting. A sedimentation chamber can be fashioned by cutting a plastic tube 1 inch from the top to form a cylinder. Apply Vaseline or paraffin wax around one of the edges of the cylinder and adhere it to a glass slide. Place 0.5 ml of CSF in the chamber and wait 30 minutes to allow any cells to settle on the bottom. Use a pipette to remove the supernatant, quickly air dry the slide, stain, and examine. Detailed information on cell counts, cytology, and protein analysis of CSF can be found in most clinical laboratory technique and clinical pathology textbooks.

Complications
Rapid flow of CSF through the needle. This could indicate increased intracranial pressure and could cause herniation. In cases of rapid flow, remove the needle and assess the patient's need for mannitol therapy (1-2 g/kg IV over 20 minutes).

Blood contamination. If whole blood is seen, the vertebral venous plexus-vessels that lie outside the spinal cord-may have been entered. If so, remove the needle and try again. A thin line of blood in otherwise-clear CSF may indicate that a surface vessel has been encountered; in these cases, the CSF may run clear after several seconds.

Procedure Pearl
The pathologist should be informed of the CSF collection site, as protein content and cell counts can vary according to location.

Make only two attempts at a cisternal tap. If both attempts are unsuccessful, consider a lumbar tap or try again in 24 hours because each attempt at obtaining CSF could increase the risk for blood contamination.

Do not attempt to aspirate with a syringe from the collection site.

Hyperflexion of the neck may actually decrease the ability to gain access to the subarachnoid space.

Flexing the extended pelvic limbs cranially for the lumbar tap slightly expands the interarcuate space to allow passage of the needle. This requires flexing only the coxofemoral joints so that the cranial aspects of the dog's hocks are firmly pressing against the sternum.