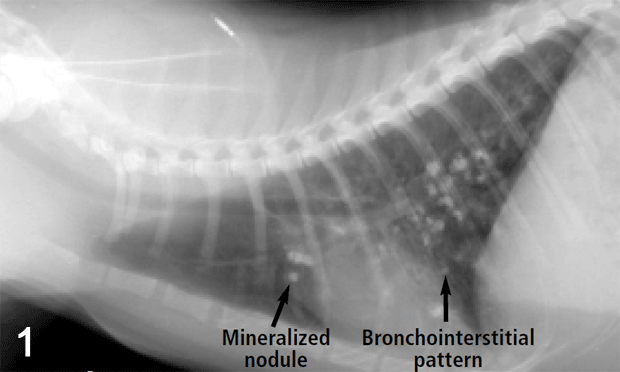 A 9-year-old, castrated male domestic shorthair cat was presented for a 6-year history of sneezing and coughing.

History. The sneezing and coughing had been poorly controlled by numerous courses of various antibiotics. An initial response was seen, but the signs would recur soon after antibiotic discontinuation. A mucopurulent nasal discharge was also present intermittently, and serous discharge was noted at other times. The cough was slightly productive and intermittent. Appetite and weight had not been affected. The cat was a strictly indoor pet and had recently moved from the southeastern United States. 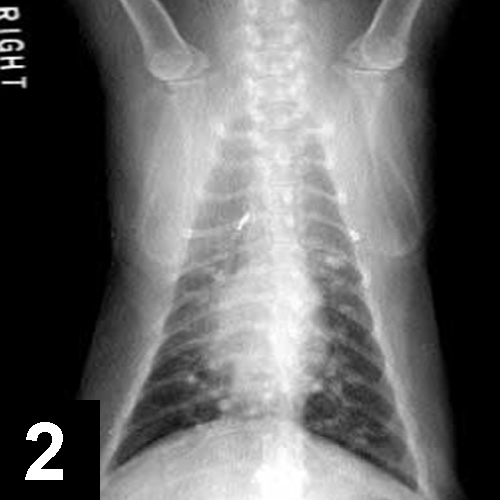 Physical Examination. Mucopurulent nasal discharge was expelled from both nares during a sneeze. Cough could not be elicited by tracheal palpation. Nasal congestion was present, but the lungs were clear. The cat was tachypneic but not dyspneic at rest. No other physical abnormalities were detected.

Ask Yourself...
What are the problems identified thus far?
What part or parts of the respiratory tract are involved in the disease process?
What are the differential diagnoses?
What are the next diagnostic steps?

Cytologic evaluation of the tracheal wash showed moderate nucleated cells, 62% of which were eosinophils. No microorganisms or neoplastic cells were seen. Although of low yield, culture of the tracheal wash fluid was negative for bacteria and fungi. Mycoplasma PCR of the fluid was also negative. Nasal radiographs showed increased opacity in the nasal passages, but no bony lysis. Histopathologic analysis of the nasal biopsy showed some distortion of the nasal turbinate remnants. Intense inflammation that consisted primarily of neutrophils, with approximately 20% eosinophils, was noted. Herpesvirus PCR on the nasal epithelium was negative. Culture of the nasal tissue was positive for Pseudomonas aeruginosa that was sensitive only to aminoglycosides, carbenicillin, enrofloxacin, and ticarcillin. Heartworm antigen was negative, and heartworm antibody was positive at 16 AbU/ml. Hyperglobulinemia is consistent with chronic inflammatory disease.

Interpretation and Treatment. Both the tracheal wash and nasal biopsy specimens identified inflammation. A fairly thorough search did not reveal any primary infectious agents. Although the Pseudomonas nasal infection could be a primary disease, it is probably a secondary disorder because of the chronicity of the problem and only partial response to appropriate antibiotic therapy in the past. With this information, a primary underlying inflammatory disease should be suspected.

Although the patient was positive for heartworm antibody, this would not necessarily translate into infection. Cardiac ultrasonography to visualize heartworms in the pulmonary artery was not performed. The pulmonary arteries on the radiographs were not enlarged, making active heartworm infection unlikely but possible. The cat had probably been exposed to heartworms in the past, resulting in the antibody response, but whether active infection is present is unknown. 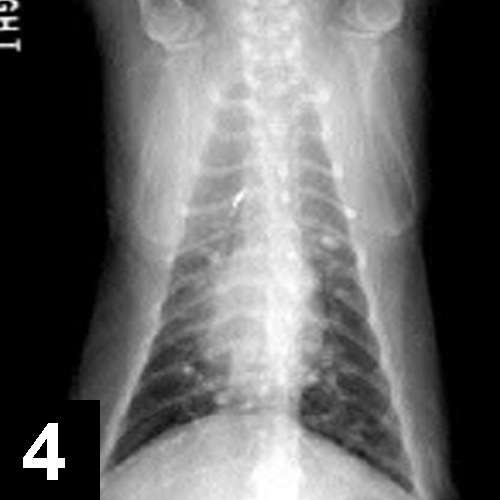 The cat is suspected of having underlying allergic airway disease, although this was not proven. Eosinophils were present in the nasal passages, airways, and blood and are commonly encountered in allergic disease. The mineralized pulmonary nodules seen on thoracic radiographs were thought to be due to dystrophic mineralization of chronically inflamed airways, although granulomas or metastatic disease could not be definitively ruled out.

Treatment with enrofloxacin PO 5 mg/kg/d was started initially. Again, the cat had a partial response. The mucopurulent nasal discharge resolved, but serous nasal discharge, sneezing, and coughing continued. At this point, corticosteroid therapy was instituted. Systemic corticosteroids were avoided in an attempt to prevent any residual Pseudomonas organisms from causing recurrent infection. Inhalant steroids in the form of fluticasone 220 µg/actuation was chosen, two "puffs" twice daily. Initially, the cat did not tolerate the metered dose inhaler apparatus, so oral prednisone was started at 5 mg PO twice daily. The cat had a dramatic and almost complete response within 2 weeks, after which the prednisone was tapered. The cat gradually began to accept the inhalant steroids and remains on oral prednisone 2.5 mg PO every other day and one "puff" fluticasone once or twice a day when clinical signs worsen. This regimen controls the clinical signs well, and nasal infection has not recurred in 18 months as of this writing.