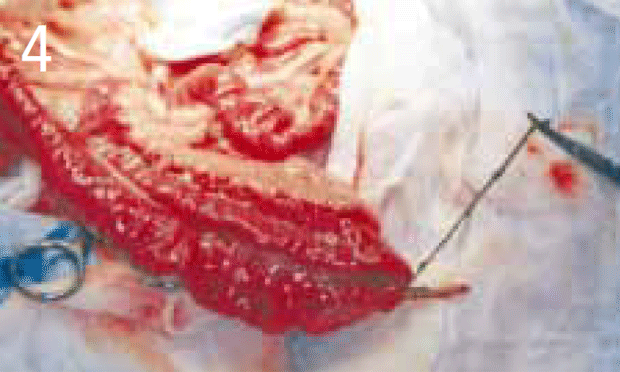 DEFINITION
Ingested, nondigestible objects that result in partial or complete obstruction of the intestinal lumen.

INCIDENCE/PREVALENCE
Although considered common, the true incidence has not been reported.

PATHOPHYSIOLOGY
Pathophysiologic alterations with nonlinear foreign bodies primarily relate to gastrointestinal tract obstruction. Severity of alterations are determined by location of foreign body, whether it is moving through the intestinal tract, degree of obstruction, and occurrence of devitalization or perforation of the intestinal wall. Intestinal distention due to gas and fluid proximal to the foreign body increases intraluminal pressure, causing changes in intestinal hemodynamics and subsequent fluid sequestration in the intestinal lumen. Dehydration and electrolyte imbalances are common, secondary to fluid sequestration and vomiting. Circulatory compromise can interfere with the intestinal mucosal barrier, allowing absorption of bacterial toxins and potential bacterial translocation.

HISTORY/PHYSICAL EXAMINATION
In some instances, the owner witnesses ingestion or the foreign body is seen in the mouth. Other common presenting signs are lethargy, listlessness, partial to complete anorexia, and intermittent or persistent vomiting.

The physical examination may be unremarkable. Dehydration is common. Careful evaluation of the oral cavity, particularly under the tongue, is important-in approximately half the cases of linear foreign bodies, the item becomes fixed under the tongue. It may become fixed anywhere along the gastrointestinal tract, with the stomach as the next most common site. Abdominal pain/tenderness, a palpable object, intestinal distention, or "bunching" of the intestine may be appreciated during abdominal palpation.

PAIN INDEX
Generally mild to moderate. Influenced by degree of obstruction and presence or absence of peritonitis.

IMAGING
Radiodense foreign bodies are apparent on survey abdominal radiographs. Intestinal obstruction is characterized by presence of several gas-filled intestinal loops of varying diameters. Radiographic signs of linear foreign bodies include accordion-like pleating, shortening, or gathering of the intestine in the cranial to midventral abdomen. Eccentrically located luminal gas bubbles that are tapered at one or both ends is a characteristic find-
ing. One study showed that the presence of three or more tapered (comma-shaped) gas bubbles was always associated with a linear foreign body. Contrast radiographic studies can be performed in questionable cases but generally are unnecessary.

LABORATORY FINDINGS
The CBC may be normal, but common hematologic abnormalities range from leukocytosis with or without left shift to a degenerative left shift in cases involving intestinal perforation and peritonitis. Dehydration can cause increases in hematocrit and total protein as well as prerenal azotemia. Hypokalemia, hyponatremia, and hypo­chloremia are common in vomiting cats.

DEFINITIVE DIAGNOSIS
Some foreign bodies are evident on abdominal palpation. Radiographic or ultrasonographic evaluation of the abdomen may identify the foreign body or suggest bowel obstruction. In some cases, definitive diagnosis is made during exploratory celiotomy.

Early surgical intervention is recommended after the patient has been stabilized through correction of fluid and electrolyte derangements. Always examine the oral cavity thoroughly, especially under the tongue, for a linear foreign body. Approximately 50% of linear foreign bodies are fixed under the base of the tongue. 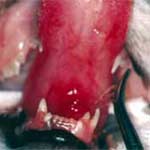 SURGERY
Remove nonlinear foreign bodies through an enterotomy incision aboral to the foreign body. Necrosis of the bowel may necessitate resection and anastomosis. When a linear foreign body is present, initially examine the mesenteric border of the plicated intestine for obvious perforations. Multiple perforations or significant inflammation and adhesions of the intestinal segments may also necessitate resection and anastomosis.

Figure 1. Linear foreign body visible under the tongue. The string was embedded below the mucosa.

The first step in removing a linear foreign body is to release it from its cranial point of fixation, which is usually under the tongue or in the pyloric antrum (Figure 1). Do not attempt to pull out the foreign body-pulling may lacerate the intestinal wall. 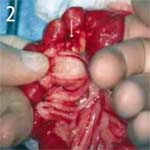 There are two techniques for removing linear foreign bodies: multiple enterotomies and the enterotomy/catheter technique (Figures 2 to 4). The latter technique works well for removing thin linear foreign bodies, such as string or sewing thread, but thicker materials, such as fabric, are hard to remove with this technique. It involves making only one enterotomy incision and milking the catheter distally through the colon and out of the anus. I modify the technique when the foreign body ends more proximal in the small intestine by making an enterotomy distal to where the foreign body ends. Thus, the enterotomy is made in healthy tissue but having to milk the catheter all the way through the intestine and colon is avoided. This modification is shown in the figures. Surgeon preference/experience is a major factor if the type of material makes either technique applicable. Multiple enterotomies may also be used if the catheter technique is tried but unsuccessful.

Figure 2. The linear foreign body has perforated the intestinal mesentery (arrow). Because multiple perforations were identified, resection and anastomosis were performed.

Figure 3. The foreign body is exposed through an enterotomy incision and sutured to a red rubber catheter.

DRUGS
Perioperative antimicrobials are administered in most cases because of the alteration in normal bacteria associated with obstruction. First-generation cephalosporins (e.g., cefazolin, 20 mg/kg IV) are often used in obstructions of the proximal small intestine. Administer at induction and repeat in 2 hours. Continuing beyond 2 hours is generally unnecessary unless surgery is prolonged or spillage of intestinal contents occurs during surgery.

I often use second-generation cephalo­sporins (e.g., cefoxitin, 15 to 30 mg/kg IV) for obstructions because they provide broader spectrum of coverage, and I prefer single agents whenever possible. The dose regimen is the same as that for first-generation cephalosporins.

Buprenorphine should be given at 0.01 mg/kg as premedication and then continued as a constant-rate infusion after surgery for 24 to 48 hours.

FLUIDS
Administer balanced electrolyte solutions to correct deficits, provide maintenance fluids, and replace ongoing losses. Selection of a specific fluid is often based on detected electrolyte and acid-base disturbances. Try to correct at least 50% of deficit prior to surgery. Continue maintenance until adequate oral intake is reestablished after surgery. Hypokalemia, hyponatremia, and hypochloremia commonly result from vomiting and lack of normal intake. Potassium supplementation is based on measured deficits.

ALTERNATIVE THERAPY
Conservative management of linear foreign bodies can be considered in very select cases. The criteria I use for choosing this option include recent ingestion, foreign body fixed around the base of the tongue and thus easily freed, lack of clinical signs, and no observed plication of the intestine. The cat should be closely monitored for development of clinical signs related to obstruction.

NUTRITIONAL MANAGEMENT
Unless vomiting continues after the procedure, food and water can be offered the next day. Consider placing an enterostomy feeding tube during surgery in cats that have been vomiting persistently or that have been anorexic. If an enterostomy tube is placed during surgery, start supplementation when the patient is fully recovered from anesthesia.

PATIENT MONITORING
Monitor closely for the first 3 to 5 days after surgery, and take the temperature at least twice daily. A temperature higher than 103.5º F warrants further diagnostics to determine the cause. Gently palpate the abdomen for evidence of pain and abdominal effusion. Additional diagnostics may include CBC, abdominal ultrasonography, abdominocentesis, or diagnostic peritoneal lavage. If free or phagocytized bacteria are found on examination of abdominal fluid, perform exploratory celiotomy to rule out leakage from the sutures or dehiscence.

Complications. The most severe acute complications are associated with leakage or dehiscence of the enterotomy/anastomosis, resulting in peritonitis. Potential long-term complications include impairment of normal gastrointestinal function, secondary inflammation and/or fibrosis, and short-bowel syndrome if extensive resection of intestinal length is necessary.

Course. Most cats recover within a few days unless complications occur.

RELATIVE COST OF TREATMENT
$$$ = >$1000. In our hospital, uncomplicated cases typically run $1000 to $1500. If patients have preexisting peritonitis or develop postoperative complications, cost can approach $2000 to $3000.

FUTURE CONSIDERATIONS
With growing interest in minimally invasive surgery, it is likely that some cases will be managed using the modified enterotomy/catheter technique, particularly when the ingestion is recent and/or when the foreign body is fixed under the tongue.