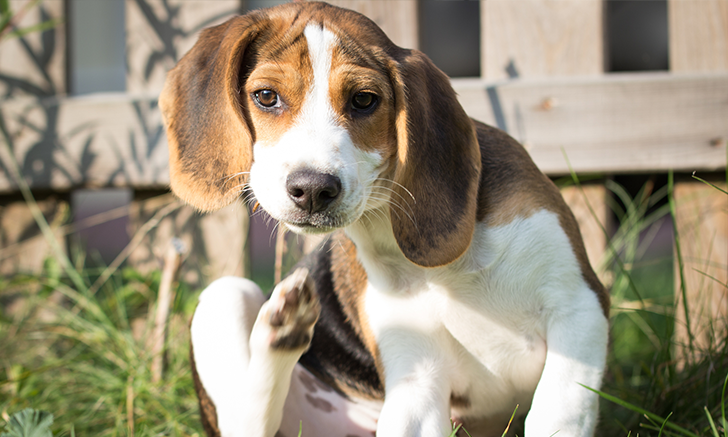 Skin disease remains one of the most common ailments for both puppies and adult dogs, with dermatologic conditions being 4 of the top 10 most common reasons for veterinary visits.1 Puppies in particular are predisposed to skin disease because of an immature immune system and an immature dermal protective barrier function.

Encompassing both infectious and noninfectious causes, skin disease can be extremely frustrating for both owners and veterinarians alike. While a variety of treatment options are available for each dermatopathy, it is important not to assume a “one-size-fits-all” approach for each patient.

Demodectic mange is caused by skin mites that are a ubiquitous part of the normal flora of healthy dogs.2 The mites reside deep in the hair follicle, and as long as the immune system is working normally, the mites do not cause disease. Puppies acquire the mites from their mother shortly after birth, typically during nursing or other times of close contact. Because these mites are found on virtually all dogs, they are not considered contagious.

Unlike adult dogs, puppies do not have a mature immune system, which can result in an overgrowth of the mites deep within the skin. Certain breeds—such as the Afghan hound, American pit bull terrier, American Staffordshire terrier, Boston terrier, boxer, and English bulldog—are particularly predisposed to developing demodectic mange.3,4

There are 2 forms of demodectic mange, localized and generalized. The localized form results in a region of focal hair loss, commonly on the face or legs. Clinical signs are typically mild or even nonexistent, and the infection is often self-limiting as the immune system matures. When the localized form spreads to involve multiple regions of the body, it becomes the generalized form of the disease. This form often results in large areas of hair loss, inflammation, and secondary infections.

Although the localized disease form is typically self-limiting, the generalized form can be extremely frustrating and challenging to treat. Common therapeutic options include ivermectin, milbemycin, and moxidectin, all of which are extra-label uses. These medications must be given repeatedly for long periods of time and require high owner compliance to be fully effective. A newer class of drugs, the isoxazoline parasiticides, has recently been demonstrated to be highly effective against generalized demodicosis.5-7 With a longer lasting active ingredient, this class of drug has the potential to provide sustained control of infestation for at least 3 months after a single treatment; this usage is also extra-label.

Sarcoptic mange is also caused by skin mites; however, there are several important differences between these mites and the mites that cause demodectic mange. Sarcoptic mites reside in the superficial surface of the skin and often cause intense pruritus. It is common to find no evidence of mites during a superficial skin scrape because significant disease can result from only a small number of mites. The pinnal-pedal reflex has been shown to be a valuable diagnostic tool for identifying sarcoptic mange, even when no mites are found on a skin scrape.8 The intense pruritus seen with infestation can often lead to self-induced excoriations and secondary bacterial infections. Another important feature of sarcoptic mange is its zoonotic potential. This disease can not only be transmitted to humans but also is highly contagious between dogs. Macrocyclic lactones are among the common therapies for sarcoptic mange; however, recent studies have found some drugs in the isoxazoline class to be effective at both eliminating mites as well as addressing clinical signs in dogs with sarcoptic scabies.9,10 Use of these drugs for this purpose is also extra-label.

Ringworm is caused primarily by the dermatophyte Microsporum canis, which feeds on keratin found on the surface of fur, nails, and skin. Compared with older dogs, puppies are at an increased risk for developing ringworm infection secondary to an immature immune system. The disease is highly contagious to both animals and humans and is one of the most common causes of tinea capitis (ie, ringworm of the scalp).11 Infection is spread both by direct and indirect contact (fomites), and spores can survive for months in the environment, making reinfection possible if appropriate environmental decontamination is not performed. A Wood’s lamp can be used to screen patients for ringworm infection; however, false negatives are common. Fungal culture, direct examination of hairs to document active infection, and even biopsies can be used to diagnose infection, as can monitoring empirical therapy.12

Successful treatment requires use of systemic oral antifungals in addition to topical disinfection of the hair coat. Although there are several systemic antifungal therapy options available, not all medications are safe for use in pediatric patients. Once a patient is diagnosed with ringworm infection, it is crucial to treat all household pets and quarantine those pets not showing clinical signs.

Successful treatment of allergic dermatitis involves not only medical management but also environmental modifications based on the underlying disease trigger, and a multimodal approach is recommended for an optimal treatment outcome.

Allergic dermatitis is the result of an inflammatory and pruritic allergic skin disease. There are multiple causes of allergic dermatitis, the most common being flea allergies, food allergies, and atopy. Flea bite allergy is the most common cause of canine dermatologic disease, and it is therefore recommended to maintain year-round preventive therapy in pruritic patients.13,14

Successful treatment of allergic dermatitis involves not only medical management but also environmental modifications based on the underlying disease trigger, and a multimodal approach is recommended for an optimal treatment outcome. Parasite prevention is also a crucial component of multimodal therapy, particularly in patients with insect-specific allergens.

Dermatologic diseases are extremely common in the canine population, and puppies in particular are at an increased risk because of their immature immune system. There are many reasons for a puppy to be itchy, and regardless of the underlying cause of pruritus, secondary bacterial infections are common.

Most cases are best treated with a multimodal approach, using both medical management and environmental modifications. Although a combination of both topical and systemic therapies has been suggested for management of the more common dermatologic diseases discussed here, not all of these medications have been proven safe for use in pediatric patients.

Additionally, many topical treatments, such as lime sulfur dips, are time-consuming and require a high level of owner compliance. The isoxazoline drug class is a newer option for treatment of many juvenile skin diseases and may also improve owner compliance due to the need for less frequent dosing.